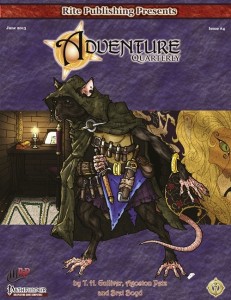 After one page of introductory musings of Robert N. Emerson (on the nature what is “right” gaming), we delve into what will from now on be a continuous series of articles: Ruins Perilous.

Now if you’re not familiar with the concept, here’s the deal: Questhaven, as some of you may know, is a city ruled by adventurers – and as a means of improving your social standing and moving up in the adventurer’s guild (the Questor’s Society), you can explore the mega-dungeon called “Ruins Perilous”, which is actually a lethal proving ground for the guild, its challenges artificially created by the society to test the mettle of wanna-be heroes. The first level was featured in AQ #2, and, much like it, the second level, this time from the pen of one of my favorite supplement authors out there, T.H. Gulliver, can stand on its own, should you so desire.

That being said, apart from the note that this level is intended for PCs of 2nd level, that’s about as far as I can go without going into massive SPOILERS. Potential players should jump to the conclusion.

You’ve been warned! Here we go! As with the first 10 levels of the Ruins, the dungeon dragon Carcera is in charge of resetting/repopulating the complex. When not using the guild-rings that are used to activate some of the dungeon’s effects, some suggestions for replacements via magical energies are given. So- what is level 2 about? Well, for once it is inhabited by the Hammer Mountain Ratfolk – refugees from their eponymous home-complex and the ones that reset the traps on the first 5 levels of the dungeon and know all those nifty secret tunnels.  Unfortunately (or fortunately), not all is well in the state of the rats – one may even call things rotten, since the king has been killed by his pet giant snake which is supposed to be no longer poisonous and blind to boot. The corpse has vanished and the deceased king’s brother has married the queen, while the prince has vanished and the ratfolk’s master trapsmith Ophelia (here any pretense of subtlety is dropped) refuses to work.

Yeah, if your literature classes are all but forgotten, let me spell it out for you – this is Hamlet with rats – only it’s more. True to the concept of the dungeon and the ratfolk’s predisposition towards traps, the level starts as a trap gauntlet (which is btw. reproduced in a cut-out, enlarged part of the level’s map – as are the other parts) before the PCs encounter ratfolk and are thrust into unconventional social dynamics – whether they just hack and slash through the level (dealing with ninja rats…) or engage in diplomacy, they can either have some hack and slashing or a microcosm of social intrigue upon their hands – the exploration of the inner warrens and the fungal garden (two complexes), where the prince is hiding and the huge cobra lairs – have I mentioned the neat fungal hazard taken from 101 Hazards and Disasters? Whether as an orgy of bloodshed or courtly intrigue, it’s up to the PCs on how to resolve this sandbox and show that in their version, Hamlet could have had a less cruel ending.

The second module, by Agoston Petz, is called Legend of the Huntress and it is in here that adventurers are hired by a disreputable man on the behalf of one greedy merchant called Jospeh Hackesh, who hires them to acquire a specific ruby hidden in a manse in the notorious Dire Weald – last known resting place of lady Jacqueline of House Nadaly. Having found proof of the manse’s location in a hidden study of his, the players may check the study and engage in dialog with the merchant – which is depicted in quite vicarious detail. The Dire Weald makes the best of its name, coming with some rather deadly potential random (and not so random) encounters, the latter covering an elder forest drake, the skeletal undead remnants of the deceased lady’s lover and huntsman and also a drow hunting party (with a sidebox to spice up the warriors of the patrol) – already hinting at the things to come, for the abandoned manse is not that abandoned and now a drow stronghold – and hidden below it lurks the dungeon, where the spectre of Jacqueline along her twisted spellbook await to test the PC’s mettle, also filling in the blanks of her fate and her dealings with a notorious vampire lord – whether they keep their bargain or not, of course, remains up to the PCs…

The final module herein is Bret Boyd’s (the mastermind of Tricky Owlbear Publishing, btw.!) “Self-Determination” for level 15 PCs – The PCs awaken as strange blue tendrils recede – and they are naked. Disoriented, they take the rudimentary equipment from an adjacent room and find a map of the surrounding sites – showing places the PCs have never heard of before. Exploring the complex further, the PCs find strange evidence of an organization called the “Black Hand” (comic-book geeks should get a chuckle out of that one), before encountering strike-squads of two-headed trolls and deadly harm traps – and probably realizing that they bleed blue and require less sleep…something is odd here. Escaping from the complex, the PCs will probably sooner or later stumble across the village of Pelkiin.

Turns out, the PCs are not in their own world anymore, but on Caldina, the continent of Quitan. Among other pieces of information, the PCs get to know about an abandoned temple in the mountain, the fact that the community needs to pay tribute to the trolls once a year and that a world-hopping elven wizard only known as “the Albino” is probably the man to seek out – only he’s none too pleasant and lives in the swamp. Worse, an infiltrator of the Black Hand has travelled to this world, shadowing the PCs…

The Albino is not sporting for a fight, hitting the PCs with the blunt truth – that they are clones of the original PCs, created on behalf of the Black Hand to create evil versions of the PCs. There is no home for them to return to and just as the albino tries to goad them into helping him, the commander Xanivexilom arrives and commands the Albino to return the PCs to their cages – to which he replies with the fact that they have a free will. And yes, if the name was not enough indication  -the commander is a dragon. Beyond the deadly fight, the albino is not telling the whole truth – he is actually an offshoot of a deity – and in order to get the PCs and warn the red-blooded originals back home, the clones will need to brave the temple that is now the roaming ground of the trolls. Braving the trials herein, the clones may now actually go “home” – serving multiple purposes – whether as a backdrop solution for a high level TPK (a plan b that backfired, so to speak), as an option for PCs to talk to themselves, a set of extra lives, a change of scenery (a new campaign world – insert your own choice!), a way to introduce a shadowy cabal – the choices are massive. What if the war god returns and wants to reabsorb the albino? And what if the cloned bodies need something to sustain themselves? You could easily go full-blown Fringe with this set-up, creating world-spanning plots – and what if the free will of the clones struggles against an ingrained programming of the Black Hand? The massive amount of potential herein is interesting – there is so much going on here, as a kick-off for a new arc, this is simply superb. We also get stats for the two-headed trolls, two new magic items and, of course, maps.

Creighton Broadhurst has done something glorious for this issue as well: As far as I can remember, I’ve complained about the Dungeon Dressing-series installments on doors, double doors etc. lacking handles and hinges – and this pdf finally nets us these dressings – with a massive d%-table with 100 entries covering the subject – 2 thumbs up!

The second appendix is titled “Wide-Open Sandboxing: The Dam War” that essentially sketches a sandboxy environment that could be developed into an adventure or a whole campaign alongside some neat pieces of advice for DMs – again, neat -though that was to be expected from Steven D. Russell!

Editing and formatting are very good, though the second module could have used some blank lines to make the block of text easier to read. Layout adheres to RiP’s two-column full-color standard and the pdf comes with some original, beautiful full color artworks mixed with some fitting stock art. The pdf comes fully bookmarked and with an archive containing maps of the areas, partially as high-res jpegs (for Ruins Perilous) and as jpegs. The maps are made with dundjinni and are ok, though nothing to write home about. Unfortunately, we don’t get player-friendly versions of the respective maps, i.e. all come with letters inside, making them not particularly suitable as hand-outs.

Speaking of not particularly subtle – a slightly more subtle nomenclature in the first module would have been nice, as would have a slightly more detailed note on social interaction. If your group is like mine and well-versed in classic literature, you may want to rename some NPCs to make things slightly less obvious. The second module feels a bit cluttered – by focusing on the module’s boss (and adding some haunts) or on the new inhabitants, making either a more constant threat, the module could have been improved, though there’s per se nothing wrong about it. The final module is GLORIOUS in its set-up and idea and not too interesting regarding the primary opposition, but it doesn’t have to be – it opens up some rather interesting questions on free will and transhumanism while remaining firmly entrenched in fantasy. Kudos to Bret Boyd!

All in all, though, in spite of the cool appendices, this issue of AQ feels slightly weaker than the superb third issue, missing 5 stars by a margin and among others, due to the lack f player-friendly maps. As such, my final verdict will clock in at 4.5 stars, still rounded up to 5 for the purpose of this platform, though, for even with my nitpicky gripes, it remains a more than neat offering.

Ask your players what makes their characters tick – and get this collection of modules here on OBS and here on d20pfsrd.com’s shop!