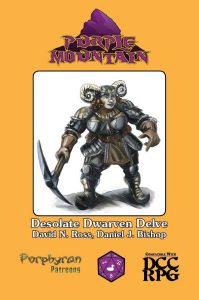 The second level of the conversion of PDG’s old-school dungeon delve in the Purple Mountain is 38 pages long, 1 page front cover, 1 page editorial/patreon-thanks, 2 pages SRD, leaving us with 34 pages of content. The pages are formatted for digest-size (6’’ by 9’’, A5), which means that you can fit approximately 4 pages on a sheet of paper if you’re trying to conserve ink/toner.

All righty, first things first: While this is obviously level 2 of a mega-dungeon, the pdf does come with advice for judges to use the dungeon presented herein as both a sequel to level 1 (including some troubleshooting advice) and as a stand-alone offering. Being dwarven-themed (no spoilers there-it’s literally in the title!), the adventure’s potential hooks also include this means of tying it to the interesting AL 3 Waystation location, a stand-alone, interesting little drop-in locale for DCC.

Judges should be aware that the module does present its basic environmental rules (doors, illumination, etc.) in a concise manner, including potentially slippery fungus that covers parts of the dungeon. As in the first installment of these, the pdf does feature both regular random encounters and special random encounters, though the latter are less diverse this time around.

Also not spoiler-territory (since it’s part of the hooks and provides no real advantage for the PCs to know), but very worth noting: This module does feature gremlins. While they are a much loathed staple in PFRPG, I was pretty interested to see what Daniel J. Bishop did with them, particularly their aura of bad luck – and frankly, I was positively surprised to see the mechanics make good use of DCC’s peculiarities. Indeed, this dungeon being more conservative in how it is set-up, we have quite a few critters, including otyughs, converted herein.

Having jumped in the meat grinder/waste disposal shaft in the temple of the vermin lord and being received enthusiastically by a hungry, young otyugh, the PCs enter what once was a nice little Dwarven colony – unfortunately for the PCs, emphasis lies on the “was” – the colony was wiped by a manifold threat – an infestation of dark ivy (aka yellow musk creeper – a plant monster that generates zombie-like servants from the slain); there is a cadre of gremlins haunting these halls…and the slain dwarves have returned as nasty, undead versions of themselves, so-called blindbrauns.

That does not mean that there is just hostility to be encountered, mind you: In fact, there is a troglodyte hermit (who also represents a possible tie-in to the excellent Silent Nightfall module) and Pallcap, a faerie-like shroom being, both of which may be helpful when clearing out this level…or they may prove to be more obstacles to vanquish – in short, this is a dynamic dungeon with a couple of mini-factions. Special note deserve the gremlin-cursed waters with their diverse effects and the detailed, dwarven machinery, which has been rigged, trap-style…and yes, these interconnect.

Editing and formatting are good, while I did not notice an undue accumulation of glitches, I did encounter a couple of minor conversion relics, where the way in which some rules work still felt a bit Pathfindery. These are not jarring and not something you’ll find often, but purists may be slightly annoyed. Layout adheres to Purple Duck Games’ 1-column standard with a white background and purple highlights. The pdf does sport several full-color artworks that are nice, if not all glorious. The cartography is okay, but annoyingly, we do not get a player-friendly map, which is particularly jarring, since the map contains the pipes of the dwarven machinery, representing a SPOILER of sorts when handed out to the PCs. Also annoying: Out of some strange reason, the pdf has no bookmarks, which represents a serious comfort detriment.

David N. Ross’ installment of the original version of this level was my least favorite installment in the whole series and Daniel J. Bishop’s conversion, alas, didn’t change much here. The DCC-version of this module feels, theme-wise, surprisingly like standard fantasy. It is a faithful conversion, but compared to level 1, whose themes were closer to those of DCC, level 2 feels overall less inspired. If you’re like me and expect a bit more of the weird and extraordinary from DCC, then this may strike you as a bit vanilla.

If a bit slightly less outré fantasy in your DCC campaign is what you’re looking for, then this should deliver. That being said, the lack of both player-friendly map and bookmarks, serve as two major hamstrings for what already was the weakest installment in the series, and without them, I frankly can’t go higher than 3 stars. That being said, judges: Even if you do end skipping this one, stick with the series: As someone who has run all modules in it, let me tell you that the next levels will be amazing treats indeed if the conversion holds up!

You can (and should) support Purple Duck Games’ otherwise excellent DCC-line here on patreon!