EZG reviews The Genius Guide to the Talented Monk

The Genius Guide to the Talented Monk 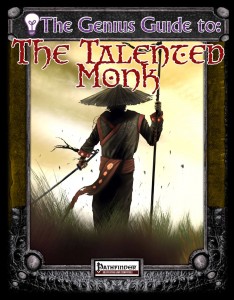 This third installment of SGG’s Talented-class rewrites is 27 pages of content long, 2/3 of a page front cover, 1 page editorial/SRD, leaving us with 25 1/3 of a page content, so let’s take a look!

All right – like its two predecessors, this pdf provides us with an alternative for the monk – and imho the class needs it – the monk, while better than its previous iteration, still is too tied to its basic principles and doesn’t offer that many customization options – enter this take! On a basic level, the class gets 3/4 BAB-progression, 4+Int skills per level, d8, proficiency with clubs, crossbows, daggers, handaxes, javelins, shortspears, short swords, slings and spears and good fort-, ref- and will-saves.

Have you noticed the first peculiarity yet? Yes, no improved unarmored strike – unless you want to have it! At first level, the monk gets 3 so-called monk edges and for the next 3 levels, monks also get an additional monk edge. Unless otherwise specified, edges may only be taken once – so what do they do? Well, first of all, we get 21 of these edges, allowing for a rather extensive amount of variety – but read the pdf’s boxed text: Yes, it is possible to make an ineffectual talented monk – evasion, ki pool, fast movement, flurry of blows, wis-mod to AC and CMD – all of these are no longer obligatory, but optional. Among the other options, edges may allow talented monks to get proficiency with light and medium armors, gain +1 natural AC, gain handle animal as a class skill (and mounted combat as a bonus feat), may gain Diplomacy, Knowledge-skills and Linguisitics and tie the wisdom-attribute as key attribute to them. Proficiency with martial weapons by group, wildering in combat feats, an oratory-based bardic performance for inspiring courage and flurrying with maneuvers as well as improved grappling become distinct possibilities – and later still have additional results – at 8th level, e.g. grab (ex) is provided by one of the edges – oh, and you can actually exchange edges for monk talents.

You start the game with two monk talents and get +2 per level for the next 2 levels, after that gaining 1 such talent per level. At 10th level, advanced talents get added to the list and at 20th level, grand talents make for capstones. Whether edges or talents, they do come with information on from which archetype they were derived from if applicable. As yes, casting via ki as qinggong monks, increased damage dice in crit 20/x2 weapons and a vast array of talents allow for maximum customization to create your own version of the monk – distinct beyond style-feats and easier to be included into your campaign setting, allowing you to e.g. create support monks based on hindering foes as well as weapon-studded martial artists.

Speaking of beyond styles – of course the respective options to e.g. fuse styles etc. are still there and the talented monk also gets o choose the apex of his/her powers – which is awesome. Now to combat the massive wall of text that makes up a significant amount of this product’s content, we also get a very helpful list of talents by classes. Speaking of helpful: A question immediately comes to mind – is there an option for synergy between this class and its talented rogueish/fighter cousins?

Balance-wise, the results can be daunting to take a look at – and the pdf actually addresses it by providing a variety of different options and advice on creating balanced hybrid options from the base-classes -awesome!

Editing and formatting are very good – while I noticed a couple of minor issues and honestly would rate it slightly down for it, these minor glitches a) are errata’d and hopefully will be updated to the file and b) the construction of the class is simply awesome and overshadows those minor flaws. Layout adheres to SGG’s 3-column full color landscape standard and the pdf comes fully bookmarked for your convenience as well as with several beautiful full color artworks.

Owen K.C. Stephens has done it again – and even surpassed the excellent fighter-installment : We get one beautiful, massive take on the monk-class that is inherently more complex and versatile than its base-class, ridding the monk of its linearity and replacing it with options galore – options that might require more responsibility on part of the player, but that also will enrich your game and especially the experience of playing this class by at least a tenfold – final verdict? Unsurprising 5 stars + seal of approval. These will be standard in my game.

You can get this superior take on the monk-class here on OBS and here on d20pfsrd.com’s shop!