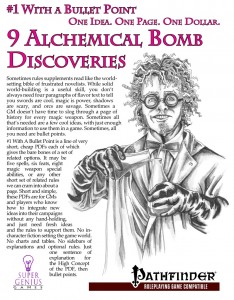 All right, you know the drill -3 pages, 1 page of front cover, 1 page SRD, leaving 1 page of content, so let’s take a look at new bomb discoveries!

-Bombard: Charge ammunitions held by an adjacent ally as a standard action, dealing the bomb damage in addition to the regular damage. The charge is maintained for 1 round per level. AWESOME, but VERY powerful discovery.

-Dye Bomb: All creatures hit by a dye bomb take a -10 penalty to stealth and are easier to track. The dye can’t be properly washed off for 72 hours. OUCH!

-Elemental Bomb: Alternatively deal acid, cold or electricity (not shock, as it’s called here) damage. They may also deal sonic damage, though the first list does not list this damage-type. In order to take the respective energy, the alchemist still requires the appropriate alchemist discovery. This can be combined with other bomb-modifying discoveries.

-Laughing Gas Bomb: Hideous Laughter gas bomb that does not deal damage; Other creature types do not get the usual +4 to saves of the spell. Can you say (almost) Joker Gas? Hell yes!

-Personal Immunity: Be immune to your own bombs. Oh yeah!

-Remote Detonator: Don’t know why this one lists the APG as origin for a prerequisite discovery in the prerequisites – the other prereqs don’t specify their source books. Rather than setting a number of rounds for delayed bombs, alchemists may instead detonate via fuse or line of sight etc. Neat!

Editing and formatting are good, though not perfect – I noticed minor glitches. Layout adheres to a somewhat cluttered 3-column b/w portrait-standard. The pdf has no bookmarks and requires none at this length.

Owen K.C. Stephens has created some neat discoveries here that range from pure awesomeness to bland filler, though it should be noted that the latter is rather the exception than the rule. I’m honestly not 100% sure what to make of elemental bomb – it works, yes, but its wording is uncommonly cluttered and unrefined and had me read it rather often to get at its intention, which is something that only happens VERY rarely. All in all, this pdf can be still considered a good buy that does offer some cool ideas, though balance-wise they may be at times a bit on the strong side. Still, well worth a final verdict of 3.5 stars, rounded up to 4 for the purpose of this platform.

You can enhance your bombs here on d20pfsrd.com’s shop and here on OBS!