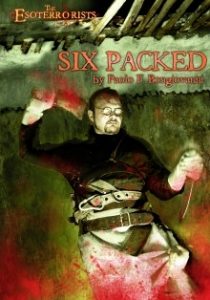 This adventure for Esoterrorists clocks in at 26 pages, 1 page front cover, 1 page editorial, 1 page ToC, 1 page references, leaving us with 22 pages of content, so let’s take a look!

All right, only GMs around? Great! Our take centers on the machinations of two individuals, namely George Bingham and Fred Seymore, Ulster Loyalist Defense Force loyalists who seek to re-incite the hostilities in Northern Ireland by means of terrorism. With their group recently losing most members due to disillusionment, the two have killed the son of an IRA member, one Jeremy O’Leary – and act that has shown a gulf between the two, for George seems to not mind, whereas Fred was less enthusiastic. Alas, even that semi-botched hit (which included a car crash) was not enough to make the terrorist goals work – it is here that George, in his desperation to see his cause fulfilled, met one woman named Deborah McArgill – who is an esoterrorist. She introduced George to the ritual to call forth torture dogs to carry out acts of terrorism, requiring “only” the sacrifice of a loved one and 4 children per torture dog. The ritual was carried out in a slaughter house and was successful, leaving Deborah and George in charge of 5 of the hellish beasts – and they plan on using them, as Deborah has secured a job at a hotel where the North Irish Catholic delegation is hosted.

After a brief flow-chart illustrating the structure of the module is helpful and the module is particularly designed to allow for scene-skipping, which makes it pretty well-suited for convention gaming etc. The OV agents begin their investigation with the aforementioned slaughterhouse (which comes with a VERY basic, schematic b/w-map) – it is here that the PCs will find the body that gives this module its name – in case you didn’t know: “Six Packed” is a non-lethal form of punishment, in which someone is shot through the feet, ankles and hips – oddly, though, the man has thereafter been killed, which is very weird. It should be noted that the rules-nomenclature has changed since this was released, so that is something for the GM to bear in mind, but yeah. PCs will notice that the blood under the body is too plentiful for one being, which may point the PCs towards the meat-grinder, where the remains of the immigrant children used in the massacre can be found.

At the scene, the PCs may question a Polish girl working at the plant and the chef of the meat processing plant – though oddly, one of the bullet points in Jenny’s write-up lacks the results for spending some points, which is weird. Vince can potentially identify the thugs that borrowed his facility – which points towards the Alexis family…but further investigation of these notorious persons does not yield the suspect, but does net the information that Fred and George were those that rented the facility…and may also note that the family is NOT amused by having the facility “blow up” – and thus no longer be any good for future…problems. As an optional encounter, this may result is a bit of combat, as the Alexis family sends a hit team after the PCs, with a car-chase/fire fight. The consequences for a veil-out here could have used a bit more guidance.

At Fred’s apartment, an old lady may yield the clue that Fred was seeing a girl (that would be Maggie)…and indeed, both her and Fred’s laptop (in her possession) yield the information that he was planning on leaving the ULDF – it is also from the old lady, Maggie, and the laptop that the PCs can piece together that George and a mysterious lady were cooperating…and that they are prime suspects for the dread massacre that cost Fred his life. At this point, the PCs will probably have a lead on a mediterranean catering service…and it is here at the very latest that the PCs can find out the final location of the intended hit, as Deborah, with a new hire (George) has left for the Ancient Farm Hotel housing the delegates.

Here, things take a turn for the dangerous: Deborah and George are armed with silenced weapons and are driving away – a hostile altercation may send the MI5-operatives running…but nonetheless,, stopping the esoterrorists may be worth the harder veil-out…but the timer’s ticking: The drugged torture dogs have been brought inside the hotel and the PCs better hurry…the drugs will soon wear off and the PCs have a veil-out to think about. Torture-dogs (which come with a glorious, twisted b/w-artwork) have btw. an integrated drill, toxic spikes that generate a sensory link between the creature and the PC and telepathy…yeah, OD entities are not there to cuddle.

Weird: The veil-out doesn’t even mention the potential car chase and killed esoterrorists, though the process in the hotel has some basic coverage, though it is not very detailed, making it an afterthought at best.

Editing and formatting are good, though not as good as in later offerings by Pelgrane Press. Layout adheres to a 1-column b/w-standard and the pdf has 2 nice b/w-artworks and a stock photo in color as artworks. Cartography is as basic as it gets black lines on white, abstract and pretty rudimentary, but functional. The pdf does not have any bookmarks, which constitutes a comfort-detriment.

Paolo F. Bongiovanni’s “Six Packed” represents a linear, quick to play scenario that makes most sense as an introductory scenario, for the plot itself is pretty much the atomic esoterorrist storyline. The hotel could have used more details regarding people present, infiltration methods and finding the ODs, making it pretty evident that this section is intended to be glossed over in favor of getting quickly to the final confrontation. This is not bad, mind you, but neither will it blow any experienced GM away. It hasn’t aged that well and while the low price makes it still a decent offering, it is not something that will blow veterans away. How to rate this, then? Well, as a first scenario, it works well and I will rate it as such – 3.5 stars, rounded up to 4. If you’re already into your Esoterrorist game, have experience with ToC or NBA, round down instead – players experienced in GUMSHOE games will waltz through this. The one exception to this would be convention gaming: For a convention, this may be worth getting and rounding up, as its simple structure allows for quick modification if time concerns are a factor.