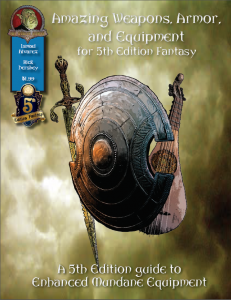 This item-book clocks in at 23 pages, 1 page front cover, 1 page editorial, 1 page advertisement, 1 page SRD, 1 page back cover, leaving us with 18 pages of content, so let’s take a look!

One thing I really enjoy about 5e would be the assumption that magic weapons and equipment is rarer and more wondrous. Conversely, this does carry some issues when looking at the equipment available for low- to mid-level characters, though, namely that the pretty restrictive array of tools and weaponry available restricts the customization options available and thus, player agenda. the pdf’s reply to this conundrum would be the inclusion of special types of items – the first of these would be the succinctly-named “quality” item. Following 5e’s pretty hand-waving item creation rules, the pdf does not seek to impose a linear system for the creation of such items and instead suggests percentile chances, narrative angles and the like, emphasizing GM-control.

Beginning with quality armor, we receive a brief table that lists them alongside whether they can be applied only to shields or armors or both – here is also a cosmetic glitch, a “)” that does not belong and should have been caught, being pretty obvious. Now each armor may only have one such quality feature and they actually allow for some interesting operations: Basher shields, for example, may be used to inflict 1d6 bludgeoning damage and, when shoving with them, they can inflict damage. Now, as a nitpick, I’d love to know how this interacts with TWFing and whether shields generally are treated as regular martial weapons or not. Granted, this is only relevant in some interactions, but yeah. Nice: There would be durable items that not only gain advantage on saves to avoid destructions, they also have a 50-50-chance of avoiding destruction, even when they’d fall prey to it.

Armor with a once for day-cycle blessing of good fortune (deliberately not tied to resting mechanics), armor that helps making a good first impression…pretty nice. Taking a cue from mythology, there would be the mirrored shield that nets you advantage on saves versus gaze attacks. Another quality would be nimble, which helps when wearing armors that hamper Stealth and have a minimum Strength score. Resilient armor is one type of armor that a group will either adore or outright ban: You see, you choose one type of physical damage with these upon creation. The wearer may use his reaction to gain resistance to the chosen damage type, but only versus one attack. Now, this is a pretty potent option, but one that taps into 5e’s restrictive action economy to work. Furthermore, it is based on the rock-paper-scissors-principle I personally enjoy very much in 5e’s mechanics. Still, as much as I personally enjoy this, the matter of fact remains that some groups won’t like this – hence me drawing awareness to this one in particular.

Soul armor is similarly an option that will polarize groups: A total of 3 times, the armor can prevent you from being reduced to 0 hp, instead resulting in you being at 1 hit point. The limits are harsh, thankfully: Only 1/encounter (insert all my rants ever regarding how per-encounter abilities make no sense in game…regardless of system)…and once the armor has saved you thrice, it will never do so again. Granted, this would still allow a character to gain another soul armor, so seriously restricting these is very much in the interest of the GM. At the same time, this very much represents a cool take on an ancestral armor that saves the hero while also reducing the potential for player frustration if your group tries to minimize PC death. At the same time, one that will be divisive would be stalwart armor, which allows you to use your bonus action to stay in place for one turn, but which also locks you in that spot, preventing voluntary movement. I am not the biggest fan of such abilities that deal in absolutes, though the cost of the bonus action can, depending on the class employed, be a steep cost indeed. As far as I’m concerned, I think that a scaling mechanic or one based on a save or advantage would have been more elegant. An armor that helps versus no thirst/starvation or supernaturally-caused exhaustion, but helps against the other types on the other side, should have universal appeal. Slight inconsistency: One type of armor is called “tastes bad” in the table, “bitter” in the text.

Weapons receive similar qualities, with ammunition, for example, getting the chance to be particularly accurate: “This ammunition confers advantage, allowing you to attack at long range without penalty, or to attack at short range more accurately.” So, does that mean no disadvantage at long range AND advantage on the attack roll? Or does that mean it gets advantage on the attack roll at short range, no disadvantage at long range? The item’s benefits are not 100% clear here, alas. The power of these pieces of ammunition is mitigated slightly by them not being able to be scavenged, but still, this one should only be used after careful consideration by the GM – inclusion of this ammunition will further increase the potency of ranged weapons. Very much cherished by yours truly: Dual purpose weapons, which have more than one damage type, allowing for, among other things, the representation of Kyuss’ evocative favored weapon, to just note one example.

Macabre weaponry nets you advantage on Intimidation checks, but penalizes your attempts to hide the grotesque weapon. Protecting weapons are VERY cool and add a serious element of tactics to the game play: These allow you to forego your bonus action; if you do, you may use your reaction to impose disadvantage on an incoming ranged or spell attack. Very cool visuals of parrying rays and the like here and the deliberate choice and lost actions mean that player agenda is increased. Two thumbs up! Allowing a character to use his bonus action to attack again after missing with an attack is another interesting option, if one that represents a straight power upgrade.

Now, since I have complained about one piece of ammunition, it is only fair that I also mention one of my favorites herein: Tenacious ammunition is the classic representation of barbed ammunition: After being hit, you shouldn’t move too much, for it’ll cause damage otherwise…until it is removed with an appropriate Medicine check. I like this one very much.

The pdf does offer more than weaponry and armor: Tools may, for example, be particularly impressive, granting recognition and prestige to those that use them, helping in social situations. Efficient tools decrease the amount of time required for a given task and the good ole’ manuals make an introduction of sorts: Instructional literature. Each comes in a set of 6 volumes, and you gain a +1 bonus per volume studied for the skill or tool in question, capping at proficiency bonus – sufficient and long-term studying of the whole set can net you proficiency in the respective skill or tool, replacing the bonuses granted before. The cool component here, obviously, is that the item speaks to the collector and can be used as a nice way of leading PCs to certain tasks…and due to the massive donwtime required to learn the proficiencies, it is unlikely the PCs will ever be able to cheese this item-class.

We can also find notes on toolkits that are particularly feasible for carrying around, and the pdf comes with suggested pricing and selling guidelines as well. The next section is very interesting as well: Between the special quality items and the full-blown magical ones, the pdf introduces so-called charms. Charms allow for a limited specialized benefit, which is, internally consistent, tied to the cycle of dawns. To give you an example: The charm of the defender can be activated as a bonus action when you hit a creature. Said creature must then succeed a Dexterity save versus DC 13 or restrained, with a success yielding halved speed. The restrained condition can be ended by the saves on subsequent rounds, but RAW, the reduced speed has no duration, though one round would make sense to me. Charms require attunement and are added in a relatively simply process to weaponry, armor, etc. and their benefits, unless explicitly stated otherwise, do not work in conjunction with magical items. RAW, more charms can be attached to one item, but the maximum attunement limit obviously still applies, preventing abuse there.

Armor that may change its precise look as an action, a charm that cloaks an item as useless or broken – the pdf has some cool tricks here. I am also really liking the charm that allows for the use of a reaction to teleport 30 ft. in a cloud of mist, negating the attack on a successful save for some nice ninja-action. A charm that negates the Stealth disadvantage on an armor also makes for a cool option…but the charm actually requires that you spend time doing charitable work to recharge it – cool angle! Spell trick charms can store level 1 and 2 spells and tie them to a condition, on which they are triggered, which is pretty amazing, though personally, I would have preferred a hard word-cap for the determining of the condition…but that may be me.

The pdf also sports charms that include the option to temporarily gain access to a skill or language of a vanquished creature and adding an Intimidation upon defeating a foe makes for an interesting option. Also cool: Making a melee weapon behave as a thrown weapon that returns to you or a charm that allows you to recall a nearby weapon to your hand…some nice tricks here!

The engine is pretty nice and is supplemented by 3 magic items: One that allows for charm-recharge (but crumbles thereafter), one for additional uses and a sash that allows you to attune two charms to it, which then proceed to grant their benefits/work in conjunction with all weapons/armor you’re wearing. Nice!

The pdf concludes with a brief tour of the fluff-only set-piece of Zagoren’s Curios Emporium, a magic shop, if you will, and his interesting shopkeepers alongside sufficient advice on how to integrate this into your campaign.

Editing and formatting are very good on a formal level, but slightly less precise on a rules-language level; as noted above, there are a couple of verbiage instances that could be a bit clearer. Layout adheres to Fat Goblin Games’ two-column full-color standard and the pdf comes with nice stock art. The pdf comes fully bookmarked for your convenience.

Ismael Alvarez’ item options represent a worthwhile purchase for the extremely low and fair price point. Regarding the quality items herein, the pdf represents a bit of a hit and miss for games – not necessarily because the items are problematic, but because they represent different types of power-upgrades that may or may not be welcome in a given game. I’d strongly discourage allowing all types of quality items in a given game, but for cherry-picking, this represents pure gold.

Speaking of which: The charms as a concept and engine are amazing and definitely need further support: There is so much to be done with the cool concept and as far as I’m concerned, they should not result in issues in any game. While the minor hiccups prevent me from rating this as highly as the amazing gems herein would warrant, when I consider the low and fair price-point into account, this most certainly is worth getting. My final verdict hence will clock in at 4 stars and I’m signing off with a definite hope for a sequel.

You can get this pdf for just 2 bucks here on OBS!