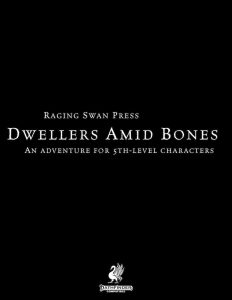 This collector’s edition of Dweller Amid Bones clocks in at 25 pages, 1 page front cover, 2 pages advertisement, 1 page editorial, 1 page SRD, 1 page ToC (also featuring adventure background), 1 page back cover, leaving us with 18 pages of pure content, so let’s take a look, shall we?

Dweller Amid Bones is a short module for 5th level characters, and features the entire village of Arcmoor as a kind of village backdrop. The sequence of presentation is clever, as we begin with detailed sample hooks that allow DMs to easily kick off the module in a variety of ways, before we get the adventure kickoff background of Arcwood.

Arcmoor as a settlement has its origins steeped in conflict – it is the place where the hero Therald Arcmoor fell, commemorating the final battle between the civilized races and the orcs of the severed ear – 300 ft. away from the feared Tuskwood. With a majority population of halflings, the settlement obviously comes with a massive array of supplemental information: We receive information on the village’s demographics, whispers and rumors, nomenclature and clothing habits as well as local lore and marketplace-information. The marketplace information has been properly adjusted for PF2, but critical successes and failures could have been accounted for in more details in e.g. rumors gleaned, walls scaled, etc. – The module does tend to fall on the side of win/lose, not accounting as much for PF2’s finer differentiation of states as I’d have liked to see.

As always, the map provided is glorious and represents the privacy the local populace cherishes with the village being relatively dispersed – one can even see where halflings and humans live. Somewhat to my chagrin, no stats were presented for the names NPCs here; the original PF1-version of the module did have a haunt as well, which is not featured in this iteration of the village. Beyond that, the village, being close to the ancient battlefield, has drawn a less than nice person living in the village, one with a strange agenda. Beyond that, a moaning haunt provides an additional nice piece of dressing.

All right, from the village and the hooks, one can easily send the PCs towards the proper module – which takes place in the cairn devoted to the fallen orcs. The place is located in the Tuskwood (which also comes with a map), but unlike in PF1, the random encounter section for traveling there, including the cool sprite swarm, has been cut. Boooo! Particularly considering how PF2 codifies exploration mode, and how you can use that mode to do fun things, that’s a pretty big bummer.

All right, still here? Great! As hinted before, Dwellers Amid Bones has the PCs explore an orcish burial cairn to put an end to the various raids conducted by a mated pair of green draconic beings – only forest drakes, thankfully, but deadly nevertheless! The drakes are properly statted, essentially featuring a nice lair action type of attack (which does have a somewhat weird verbiage, but that doesn’t influence functionality in a negative manner).The cairn and its details are up to the standard set in Raging Swan modules – general features and details to add to even unkeyed areas make exploring the cairn interesting and atmospheric.

Now from the very beginning, we get a cool twist: Gork Shattershield, undead orcish undead spirit (fully statted), manifests behind the PCs to demand they purge the drakes (which have time and time again destroyed the stubborn undead orc, only to see him rejuvenate) – thus the adventure begins with an uncommon social interaction before turning ugly – fast!

The drakes lurk in relative proximity and once roused, both attack with their noxious clouds, and the terrain featured here is pretty nice, with strange, tree-like stalactites and the like; here’s an issue, though: The original iteration of this short module stood out primarily due to the smart tactics of the drakes and the cool environment – that could have been expanded in PF2 in truly outstanding ways, courtesy of PF2’s awesome hazard-engine. The module does not real capitalize on that strength of the system, which left me disappointed at a high level.

It should also be noted that DMs get a detailed array of further adventure hooks. Where the PF1-version had terrain cheat sheets for the GM, the PF2-iteration doesn’t sport the like.

Creighton Broadhurst and Fabian Fehrs, with additional design by industry-legend Stephen Radney-MacFarland, deliver a nominally well-executed conversion to PF2 here. And an example of what I feared to see for PF2. You see, the original PF1-version was a highly technical module that used its terrain and adversaries in a clever and challenging manner; in many ways, it did back then what you can now do with PF2 much easier.

Flash forward to PF2, and we have a conversion that loses the some of the tactical depth the original had. I tested this. I’m sorry to say this, but the PF1 version of this module played better, when it really shouldn’t have. This is not a bad conversion, but it is also one that could have done a better job capitalizing on PF2’s strengths; Shunned Valley of the Three Tombs ran smoother than the original version in its PF2-version, and unlike that module, this one is not intended for starting groups.

This is particularly tragic in this instance, for the tactical depth and use of environment was what made this adventure special, depriving it of a means to enhance its greatest strength. My final verdict can’t exceed 3.5 stars, rounded down.

If you enjoy reading my reviews, please consider leaving a donation, or joining my patreon here!