Dungeon of the Unknown (OSR)

Dungeon of the Unknown (OSR) 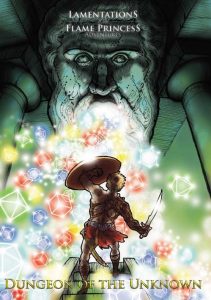 This „adventure“ clocks in at 38 pages, 1 page front cover, 2 pages of editorial/ToC, 1 page back cover, leaving us with 34 pages of content, though these include the same map of the dungeon twice; once with a turquoise background and once with a white background (printer-friendlier) – as a whole, we get 32 pages of content that have been laid out for 6’’ by 9’’ (A5) – you can easily fit four pages on a given sheet of paper.

This review was made possible by one of my patreon, who gifted me this module and requested that I review it.

Okay, so first things first: This module depicts a dungeon on the Isle of The unknown, perhaps the environment I have been most ambivalent about in all my reviewer’s career. I assume in this review that you are familiar with my coverage of the Isle-sourcebook and its particular brand of weirdness.

This book, in many ways, represents a continuation of the Isle’s approach to design, for weal and woe: Discrepancies from standard rules for LotFP etc. are all present. The main draw of the supplement (for I am loathe to call it “adventure”) would be the chimeric creatures. There are 19 monsters within this pdf, all with the neat comic-style full-color artworks. The book evolves the formula of the presentation with scaling: Each of the creatures has multiple entries, gaining new and unique abilities at higher Hit Dice. The brand of weirdness is pretty much what you’ve come to expect from Isle of the Unknown – there is e.g. a creature that sports an orang-utan’s body with a dugong’s head and tail. Among the denizens of the dungeon, there are three entities that I’d consider to be important: Alchemist, Taxidermist (with animated animals) and Jester – these fellows are magic-users and as such, sports the evocative signature weirdness of Isle of the Unknown’s magic users. Like in the big book, there is no explanation provided for their abilities, no context, no names.

The book also spends a little bit more than 4 of its pages on a slime generator. In case you needed a generator to randomly determine that slimes can’t be hit by some damage types, but hurt by others. Since the results are random, there are no correlations between the appearance of the slime and its abilities. It’s all random. One could say that this “enhances the wondrous nature” of the slimes. To this sentiment, I’d reply: “They’re slimes.” *mike drop* Seriously, I don’t object to a slime generator, but it’s all random without a proper structure, takes up a lot of real estate…and the generator isn’t that great.

Speaking of wasted real estate: Did we REALLY need tin, brass, bronze and copper pieces as a replacement for the usual coinage? Seriously? The pdf tries to justify this step by quoting Fafhrd and the Gray Mouser. I fail to see the relation. We’re on an island where a valley has literally a whole herd of sheep with golden fleeces. Yeah, totally down to earth, strapped for cash struggle for survival going on there…In case you’re wondering, yes that was sarcasm. I don’t object to such references. They should better be earned, though.

There are twelve numbered treasures to be found – there is exactly one among these treasures that I’d consider cool – it depicts a spell that transform you and your allies to moles on a trout for a time, allowing you to travel as non-sentient flecks. That is amazing! Yeah, that’s everything positive I can say about this section.

The adventure also sports 12 weird locales (one of which is tied in with Christian mythology, relevant if you’re not playing this in quasi-earth) and they represent the high point of the supplement – the fountain of platonic solids, with its diverse effects, for example, is amazing. Dumb talking doors got a chuckle out of me as well.

Then, there are the human factions. Before I talk too much, let me just *show* you the level of imaginative detail we get there:

“These Brigands are accomplished robbers and murderers. Their leader (the individual of highest level amongst them) is called the Brigand Lord. They wear leather armor and are armed with spears and daggers, and 25% have short bows.” That#s all there is to them. The rules-relevant component for the faction looks like this:

…and so on. This one table is used for the 3 incredibly creative factions named Bandits, Brigands and Buccaneers. The fourth faction, the similarly-named Berserkers, gets a slightly different table. Are you as much in awe as I am right now? Can you feel the creativity, as you’re inspired by this gem of a table?

Anyways, the dungeon itself is a square. Two levels of cramped rooms, square-shaped. There are no descriptions, since you’re supposed to fill in e.g. the shorthand for the creatures, NPCs etc. to customize the dungeon. While it comes pre-filled, a ton remains empty. This makes it even more generic, potentially nonsensical. There is no player-friendly version of the maps. Also: Square dungeon, two levels. This is, hands down, the most boring, least inspiring and generic dungeon map I have seen in ages.

Notice something? Yeah, this is not a module; it’s a sketch you can kinda use. If you really want to.

Editing and formatting are very good. Layout adheres to a 1-column full-color standard and the artworks of the critters are nice. The pdf comes fully bookmarked for your convenience.

If this had been the first book by Geoffrey McKinney I read, I would have never touched anything he wrote ever again. From the generators to the respective rooms, a ton of places are blank spaces; no descriptions, nothing; ultra-generic human factions…and a few sprinklings of wonder…of the same type that already became tiring in Isle. In fact, this book, instead of expanding the strangeness of the Isle and adapting it to a dungeon just uses the same sterile approach and jams it into an encramped space. It doesn’t work. At all.

If you, by some wondrous happenstance, have finished Isle and ended up wanting even more of the same type of weirdness, then the monsters herein and 3 magic-users scratch that itch. The weird locales are nice and can be scavenged. But the rest of this “module” is a train-wreck. It’s bare-bones, generic and bland in all other aspects and even the wondrous aspects just provide more of the same old tricks from the Isle-book. In the dungeon, we could have had so many amazing locations, ideas; Heck, pretty much all LotFP adventures or those by other OSR publishers sport some amazing, creative, flavorful rooms, challenges, traps. This book, in comparison, is a sketch of a generator – and even if rated as such, it’s not a particularly good one. Having read this multiple times, I can’t for the life of me, find ANY reason why I should work with this dungeon in the first place. A couple of dressings can be ripped out, but playing this as written? Oh boy. I wouldn’t want to GM or play this book as presented.

As many of you know, I collect RPG books and I am blessed to have a lot LotFP-books in print; this book is one of the few examples of a book where, even if I was offered the physical copy for a buck…I’d say no.

There is some minor value in the weird dressing and critters, but frankly, Isle offers the better bang for buck ratio for that type of weirdness and there are literally a gazillion better dressing books, both for classic dungeons and stranger ones. My final verdict will clock in at 1.5 stars, and while personally, I consider this to be a 1-star-mess, as a reviewer, I have to take into account that some folks may enjoy even more creatures that adheres to the same aesthetics. Hence, my official review will round up.

You can get it bundled with Isle of the Unknown here on OBS.

You can get Isle of the Unknown here on OBS!