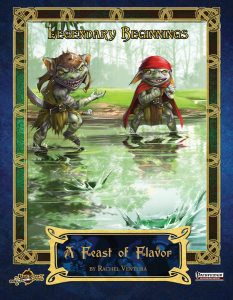 This module clocks in at 72 pages, 1 page front cover, 1 page ToC, 1 page editorial, 1 page introduction,2.5 pages of SRD, 2 pages of character-sheet, 3 pages of advertisement, 1 page of back cover, leaving us with 59.5 pages of content, so let’s take a look!

Now, first things first: The Legendary Beginnings-series focuses on adventures that are more family-friendly and suitable to both kids and adults that don’t want grim stuff/gore/dark material – the series focuses on exciting adventuring, but without the grimmer aspects. This adventure should run smoothly for kids ages 8+, though, depending on how sensitive the kids in question are, it may work for younger kids or, in the case of very sensitive kids, be appropriate for slightly older kids. Adults can have fun with this module as well, provided they do not mind the whimsical names and constant, food-based nomenclature of the environments in the region. There is dangerous wildlife to be found within – among others, aggressive geese. Some city-dwellers may scoff there or go “Oh no!” – if you do, you obviously haven’t grown up in the country. Geese are malicious birds. They are aggressive and their bites HURT. A lot. (Yep, I have been on the receiving end of them.) Just something to note when judging whether this module works for your kids.

The adventure is set in the world of Terrallien, the kingdom of Threll, to be more precise – that would be the same world assumed in the other Legendary Beginnings adventures and it remains open enough to allow the module to be inserted into pretty much any fantasy setting. The module is intended for 2nd level PCs and the PCs are assumed to be part of the Zekerian Order, which means they’ll have the “extra-life” zekerian amulets – basically free action heals and autoheals when reduced to 0 hp. These work only once per day, though! So yeah – they constitute a kind of “easy mode” particularly suitable for kids that are easily frustrated. More hardcore children or adults should probably not get these amulets as a safety net.

It should be noted that the adventure is presented in a sandboxy style – there is a hex-map of the environment, which is also reproduced in a player-friendly version. In themes, this can, to a degree, be seen as a continuation in themes of “Into the Feyweald” and builds to a degree on the experiences the players made there; while the product does offer handholding, it offers a bit less than adventures in the series that are designed to be “first GMing experiences.”

All right, only GMs around? Great! King Ambrose of Threll has heard of reports from unhappy residents in the aptly-named town of Bakewell Tart; thus, he has chosen to send elite trouble-solvers – the PCs. Bakewell tart comes btw. with a gorgeous isometric map, player-friendly version included, and folks there are annoyed. In the school building, massive meowing was heard at night, but felines in general seem to have gone missing without a trace. Layne at the pub is faced with an onion thief; Cain the carpenter needs willow root; the pass to the church is blocked by a mountain troll (ostensibly convinced to block the path by a nefarious being – the PCs can get potions to sneak past the troll and find the culprit in the chocolate mountains); kids at school complain about nasty goblins at the lake bothering folks; Bree can’t make maple syrup and the owner of the potion shop needs something from the old willow tree and mushrooms. These quests are also represented by handout cue-cards. Nice!

Nice: There are rumors to be found and a particular character can provide the solution for the conundrum of missing cats – but he speaks only in riddles! And yes, the riddles are once again represented as handouts.

Okay, so for all these quests, there is bound to be some wilderness exploration! The PCs will have a chance to pass a majestic maple forest (and encounter dangerous wildlife, which can be scavenged and sold in town) or play rock-skipping with goblins that are extremely sore losers…so losing may actually be in the PC’s interest! If they play their cards right, they may well get some cooked fish, which they may hand to a pseudodragon…who would help the PCs, for example with onions, but a gopher is vexing him. And here, the first array of cards comes into play: The module comes with absolutely MEGA-CUTE memory-style cards of flowers, leeks, onions etc with faces so cute, I almost had an overload. Nice mini-game there!!

Anyway, there is also a little dungeon, the cranberry caves – where Guy, the svirfneblin has lured the cats – not out of ill will. You see, the deep gnome really hates rats and the caves are swarming with them. He’s offering a deal to the PCs: He’ll return the cats, go free and reward the PCs for clearing out the rats…and there are some optional rooms that contain some additional challenges, for particularly brave PCs.

The toadstool ring that can be found also sports a kind brownie – collecting maple leaves for the fellow may well reward the PCs with a magical toadstool vest that grants DR 5 versus bludgeoning damage.

At the old willow tree, a young dire weasel may make for a potential ally – provided the PCs can catch the playful animal – this is where the optional Pursuit deck comes into play, just fyi. And yes, skill-check based resolutions are provided as well.

At a forking pathway, the PCs may find a slacking faun, who is currently munching berries – in order to get him to make good on his promise, the PCs will have to succeed at social skills…or employ the optional Social Battle deck and best the faun.

Once the PCs move towards the pass blocked by the mighty troll, they may be in for a surprise: The owner of the most run-down restaurant in town is actually a disguised forlarren in league with the mighty troll! While the troll will not hunt them, he may well unleash his mountain aurochs and his mountain lion – proper and potent foes!

Once the PCs have escaped the troll’s creatures (the troll doesn’t leave the canyon – he’s been ordered to stay put), they’ll have to confront the forlarren, who, at one point, surrenders and offers releasing the troll of his duty, thus unblocking the pass. This would also be pretty much the main-quest/most difficult one.

Just fyi: Pursuit deck covers two pages à 6 cards each; the social combat deck covers 13 cards (the last card being on another page) over 3 pages; and treasure and quest cards are also included, allowing you to hand out the cards to make sure that the players don’t forget one of the small quests.

Editing and formatting are very good, I noticed no serious hiccups in either rules-language or formal criteria. Layout adheres to a really nice two-column full-color standard and the pdf sports nice pieces of original full-color artworks. The cartography in particular deserves praise: Full-color, with player-friendly versions, the respective maps are really, really neat. The pdf comes with basic bookmarks for the chapters, which constitutes a minor criticism I have with the pdf: Nested bookmarks would have helped here. In fact, organization may well be the one thing I don’t like about the book: We first gain all the adventure-locales (bar the final sequence), then the village. Since the village is pretty much the hub for the sandbox, it would have made sense to present it first, as the wilderness encounters refer to quests that are gained in the village. Since this series assumes that both players and GMs aren’t seasoned veterans, that most assuredly would have made matters easier for the GM. Furthermore, while the cards do a good job at keeping track of the quests, I would have enjoyed a cheat-sheet one-page table summing up the bullet points of the quest for the GM, perhaps as a screen-insert or something like that. Sure, you can use the quest-cards, but while they make great handouts, they are a bit less useful for keeping track of things at one glance.

Rachel Ventura’s “A Feast of Flavor” is a wholesome adventure that oozes whimsy; apart from aforementioned dangerous wildlife, the module rewards solving combat in non-violent ways for the most part, makes clear that brains trump brawns and offers a wide variety of options. That being said, the amount of cards employed can be considered to be a bit gimmicky; still, without them, the resolutions of a couple of the challenges lose a bit of their unique nature. The best use of the cards would certainly be the cool memory game – it made for a great change of pace. The Social battle deck also was rather helpful.

Now adults or veteran players may consider a couple of these quests a bit “beneath” them, depending on how they handle whimsy; I probably wouldn’t play this with kids in puberty that want to be “totally grown up”. That being said, as a whole, this makes for a nice, flavorful offering. That being said, the organization is a bit challenging for novice GMs and the lack of an encounter map or terrain features does hurt the final encounter’s tactical challenge a bit. Still, as a whole, I consider this to be a well-made adventure worth getting. Taking all into account, my final verdict will clock in at 4.5 stars, rounded down for the purpose of this platform.

This adventure is also available for 5e here on OBS!

You can get the cards separately; proper cards make for better props than printouts.

Here is the Quest Deck.

Here is the Social Battle Deck.

Here is the Pursuit Deck.

Here is the link for the premium social battle cards.

Here is the link for the premium pursuit cards.

Here is the link to the combo-offering of all premium card decks.