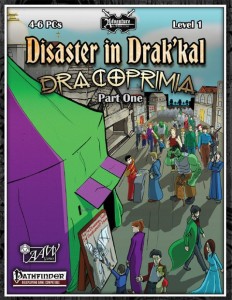 The first module in the Dracoprimia-saga clocks in at 43 pages, 1 page front cover, 1 page editorial/ToC, 1 page SRD, 1 page back cover, leaving us with 39 pages of content, so let’s take a look!

Before we dive into the meat of this module, a brief disclaimer – the following is an adventure-review. As such, it obviously contains SPOILERS. Potential players should jump to the conclusion.

All right, still here? Some of you may have been to the city of Drak’kal (which comes with full settlement stats and gorgeous full-color map, btw.) before – if you’re like me and follow a lot of AAW Games’ modules, you’ll have passed by the city before, perhaps in the Fallen Leaves adventure arc. This time around, though, we begin the campaign in this city – one of the 3 sisters that constitute an outpost of the Klavekian kingdom’s civilization before the wilderness of Serpent Lake and its environs.

No here’s something playing against the trope: The Broztavya Circus is in town, and it’s not a collection of insane killers or horrors hidden behind a thinly-veiled disguise. I know, stunning, right? And yes, I pretty much mean this – I can enumerate quite a few nasty circus modules, but one that actually depicts a “normal” one? Well, that would be a rare occurrence. As such, I greatly appreciated the very detailed gather information entries as the show is the talk of the town – it’s supposed to be the most daring show yet and rumors even speak of elven blood among the performers (something rather rare in the human-centric Klavekian kingdom)…performers the PCs can actually meet as the walk around town and soak in the sights – from the drunken bear tavern to the docks, there is some opportunity to meet the performers and make sure they’re not cannibalistic psychopaths.

The lavishly-mapped (in full color, with grid and player-friendly!) circus and its performers – from carnival games to knife-throwers…only the northern tent is restricted, after all, there, the animals are kept…and they include a friggin’ dire bat, a deinonychus…and a man with dragon-like features and crystalline, gleaming scales. If a PC knows draconic (and no group I ever ran did not have that language), there’ll be no misunderstanding – Verja is intelligent and not just grunting. He’s one of the rare Draaki (pioneered in the Underworld-Races-series). Alas, the cages are magical and a jailbreak does not seem feasible…for now. It should be noted that the module does contain information on magical auras to be found in the circus – something I *really* wished more modules took into account – nice going there! This has a reason, though – you see, there have been mishaps…and a rather nasty wizard seeks to ruin the harbormaster and is using the circus as collateral damage – finding the devious enchantments is a pretty uncommon (and cool) task for the PCs.

After a relatively brief period of investigation, though, the main show begins – here we have wonders most awesome and intriguing, as a steam-based orchestra my malfunction (or properly work) – it should be noted that each act sports read-aloud text when it works…and for the instance, when the dread enchantments placed take effect – so yes, the PCs may have to save the tightrope-walking halfling, prevent the half-orc stongman from going berserk and avoid an accident with the knife-thrower’s performance – failure results in potentially pretty grisly results. Then, it’s time for the clowns, and to the sound of a strange word, all the cages pop open, as the animals run rampant – at this point, things escalate…fast. Worse – the conspicuous vikmordere raiders among the audience attack the PCs as astute PCs may see a clown escape…

On an unrelated note – the word uttered is an Easter-egg: “Spaetzle” (roughly translating to “little sparrow”) is a glorious type of egg-noodle extremely tasty and popular in Southern Germany. Particularly Swabia is well-known for these very tasty noodles.

Back to the action: When the moon priestess and leader of town arrives, guards take note and thank the PCs – alas, unfortunately, the animals are still at large – a deinonychus in the tavern, hyena in the market, a rhino in the streets, crocodiles at the docks and, obviously, the dire bat – nice: Both docks and alleyways get full-blown, gorgeous maps – and at the docks, the PCs can prevent the mad mastermind behind the troubles from killing the notoriously corrupt harbor-master that ruined his life…and see to it that a better man can get this station. More importantly, the priestess can facilitate communication with the draaki: The creature, now free, was tasked to bring Upperworlders according to an ancient prophecy to his tribe via the newly established Rhizomorph road – so yes, adventures and the underdark await in Part II!

Editing and formatting are very good, I noticed no significant glitches. Layout adheres to a beautiful 2-column full-color standard and the pdf comes with a mix of original artwork in color I haven’t seen before and stock art, though it maintains a concise look. The pdf’s cartography by Tommi Salama is superb, as I’ve come to expect from him. The pdf is fully bookmarked for your convenience.

This pdf is a breath of fresh air – when so many level 1 modules take the low level as an excuse to be boring, this is the antithesis – the circus is a great hook, the challenges diverse and the module exudes Mike Myler’s trademark levity: This is not a grisly module, although admittedly, the results of failures to deduce sabotages can have unpleasant repercussions. In fact, I playtested this one with kids (ages 7 and up), toning down the effects of failures to deduce the problems and it works in that context just as well. In fact, the kids got ALL the sabotage-attempts and while the final confrontations proved hard, the module can be solved sans bloodshed. For didactic purposes, I grant such groups the option to deal nonlethal damage sans penalty with spells and attacks – if they want to be the good guys, they don’t kill the bad guys – and indeed, it is my experience that they don’t want to be the bad guys; even a suggestion of killing a circus animal by an NPC was met with defiant scowls and “We’re the heroes, we handle that like heroes!” A heart-warming experience, really. Fun fact: Since the kids did not suffer from anti-circus-carnies-gonna-kill-us-all-paranoia, they had an easier time than adult players in this one.

The module as such is great, fun and steers clear of all those nasty 1st-level module clichés. If you want a nice suggestion: You may want to download Fat Goblin Games’ Halloween charity-product Carnival of Sinners (available as “Pay what you Want”) when running this module – either for the (evil) carnies to supplement the circus, should you wish to increase the gritty-factor, or to simply enjoy the carnie-speak that book offers. It adds a whole new dimension and some damn cool synergy to an already fun and inspired module.

When all is said and done, this can be considered a truly exciting, unique start for the Dracoprimia-AP, one that sees me tremendously excited for more. My final verdict will clock in at 5 stars + seal of approval.