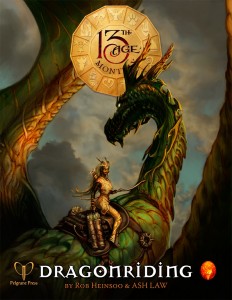 The first installment of 13th Age Monthly clocks in at 8 pages, 1 page front cover, 1 page editorial/SRD, leaving us with 6 pages of content, so let’s take a look!

There are few images so iconic in fantasy, there are few things as contended as the act of dragonriding. As such, it should come as no surprise that this pdf opens with a kind of disclaimer: Whether this happens often or not, ultimately is up to the GM – and that’s a good thing, at least in my book. Why? Because this is one of those reviews, where I sit down and swallow my personal preferences: Basically, I think dragonriding should be something that only happens rarely, if at all. If you’ve been following my reviews, you’ll know that I pretty much consider dragons to be the apex-creature and as such, am thoroughly opposed to spamming them in any way, as it lessens their impact. I was also pretty unimpressed by most Dragonlance novels – so yeah. Not the biggest fan here, mainly because, to me, the fact that these superb creatures let puny mammals ride them never made too much sense to me.

The rules provided within this brief supplement do acknowledge the diversity of requirements of campaigns: Some high-fantasy campaigns may consider dragonriding to be something wide-spread and accepted, whereas in others, the occasion is rare and something used to highlight a particularly epic story-line. The rules herein do NOT cover the out-of-combat implications of dragon-riding, instead focusing on their impact in combat – this is a strength and a weakness, but I’ll get back to that later.

We begin this installment thus with some ideas for dragon-riding adventures, neatly tied together with the lore of the Dragon Empire. These ideas are well-presented – not much to complain about here. So here are the design assumptions: Dragon-riding is envisioned as a champion tier activity. Dragons are assumed to be roughly on par with your level. Dragon combats are intended primarily to happen outside, not within the confines of a dungeon. Mounts have to be larger than their riders…and willing to carry the character into battle. THANKFULLY sans rules to determine that and force the dragon to accept a rider. The pdf also uses the simple and concise flight-rules from 13 True Ways, reprinted here for your convenience.

Depending on how much of a focus you want to put on dragonriding, a free feat may be in order – whereas campaigns with a lot of dragonriding may utilize the 2 new feats presented here as part of a character’s planned progression. The champion tier feat nets you +3 to your skill check and lets you keep mastery automatically on a critical hit of your dragon. The epic-tier feat allows you to extend the benefits of teleports and similar spells to your draconic mount, but requires you to roll to maintain mastery.

There are enough dragon stats in 13th Age already, but they’re intended for monsters, hence some basic assumptions: Dragons have separate hit points and are a separate entity for purposes of conditions etc. Regarding initiative, one takes the average between one’s own and the dragon’s initiative and mounting up in combat means the lower initiative is used. I’m not a big fan of the somewhat clunky “take average between initiatives”-solutions, but I get where the decision came from. Personal bonuses to (dis-) engage do not matter when the mount is doing the (dis-)engaging and, if a dragon is engaged with a creature, so is the rider. Dragons are always eligible for opportunity attacks.

The healing front requires some work on part o the GM – a recovery is supposed to heal about 25% of a dragon’s hit points – this is a solid guideline, but frankly, I would have preferred that being done for the GM and codified in a more stringent way. Now the action-economy is interesting: Basically, you and the dragon maintain the three default actions: quick, move, standard. The dragon burns his quick action to bear with the rider, the rider burns his move action to stay in saddle. Now, I already mentioned this nebulous concept of “mastery” – which is the cornerstone of dragonriding.

Essentially, what he have here is a skill-check against a DC that begins with DC 20 and scales up to 30, depending on dragon power. The more powerful your dragon, the higher the level-discrepancy between you, the more difficult it gets. The skill-check is modified by an attribute (which depends on the type of dragon you ride), level and relevant backgrounds. MD attacks, staggers and 0 hp all prompt mastery checks and activate attacks and tricks require mastery as well – however, and here’s the cool thing: Failing the check does not keep you from doing cool things – instead, it requires that the rider spends a standard action on a subsequent round to regain mastery – sans check. Alternatively, you can spend a quick action (only once per round) for a hard save to regain mastery – on a failure, they botched and the quick action is lost.

Of course, battles with dragons thus require more observations on part of the GM – e.g. the fact that one should carefully watch metallic dragons and eliminate the metallic awe ability from these mounts, something the pdf thankfully points out. Dragons serving as mounts do not get random dragon abilities and yes, the development of a bond and the like does provide a factor in the observations. All in all, these rules are highly cinematic and cool – but they also take a bit of the “cool” away – what do I mean by this? Since you always get to perform those awesome stunts and only thereafter have to contend with regaining mastery, you’ll be seeing loopings, 360°-spins and the like…a lot. At least if your players are like mine. And as cool as these maneuvers are, these lose some of their awesomeness if they always work. So that would be a system-inherent issue that may or may not irk you.

Editing and formatting are top-notch, I didn’t notice any significant glitches. Layout adheres to a ncie, two-column full-color standard and the pdf comes with full, nested bookmarks. The pdf comes with nice full color artworks.

This pdf, in spite of its brevity, is awesome – the rules provided for dragonriding, while slightly slowing down the game, are extremely fast for what they do – Rob Heinsoo and ASH LAW deliver here. The rules are awesome and well worth the asking price. At the same time, this one does feel like it fell a bit short of its potential. What you get here is a book that does a great combat in the combat arena…and one that completely ignores the ramifications beyond the combat component. What about the level-up component? When to level up regarding dragons? What about wide discrepancies between dragon and rider? Sure, the mastery-DCs get higher…but more guidance here would have been nice. What about the ramifications of a campaign setting’s infra-structure? I don’t expect Companions of the Firmament-level of detail from such a small pdf, but at least some components, some advice, would have been awesome. It is my firm belief that a couple of pages dealing with suggestions of non-combat implications of draconic mounts would have been more than appreciated and rendered this pdf awesome.

It should also be noted that, if you’re like me, the header “Riders with Skillz” will have you cringe – no idea why this pseudo-hip language was included here. This does not influence my final verdict, but it is something that may upset you.

In the end, dragonriding’s mechanics are awesome and great, but the book does require a lot of GM-fiddling regarding the structure of battles and the non-combat implications of the dragons – hence, my final verdict will clock in at 3.5 stars, rounded up to 4.