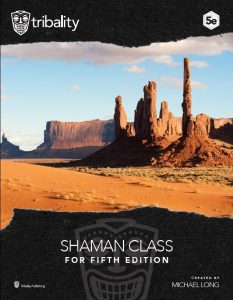 This base class clocks in at 13 pages, 1 page front cover, 1 page SRD, leaving us with 11 pages of content, so let’s take a look!

After one page of introductory prose, we dive into the nice, flavorful lead-ins that characterize 5e-classes – this time around, we hear of sacred animals, living spirits and a properly animistic duality of an existence between the world of spirituality and the natural world. In case you were wondering: Yes, this class very much is indebted to the various real world mythologies and the shamanistic traditions. Shamans have their own spell-list, included herein, with spellcasting governed by Wisdom. Shamans begin play with 2 cantrips known and increase that to 5. Their first spell is gained at 3rd level and they learn up to 15. Finally, they cast via slot: At 3rd level, they begin play with two slots and gain an additional slot at 11th and 17th level. They cast by expending these slots and the slot levels increase from 1st level up to 5th. This means that e.g. a 5th level shaman has 2 slots and spells cast are cast as second level spells, regardless of spell level. Spells learned at level up may be of any spell level available for the slots and shamans may cast spells as rituals. Totems as a spellcasting focus are required and may be replaced upon completing a long rest in the shaman’s favored terrain.

Chassis-wise, the class gains d8 HD, proficiency in light armor, shields, simple weapons, herbalism kit, Strength and Wisdom and two skills of your choice, chosen from Arcana, Animal Handling, Athletics, Insight, Investigation, Intimidation, Nature, Perception and Survival. At character creation, you choose a flavorful totem spirit from bear, buffalo, coyote, crow, eagle, elk, fox, hawk, owl, snake and wolf – unless you follow a certain path, these remain flavor-options, though. Unexpected: Shamans are actually pretty good tanks with the proper build: At 1st level, they gain an AC of 10 + Wisdom modifier + Constitution modifier while unarmored – and yes, you can add a shield to that. 1st level also yields the natural explorer feature, which allows you to choose one terrain type as favored terrain. When making and Intelligence or Wisdom check pertaining this terrain, you double your proficiency bonus in skills you are proficient. Additionally, overland travel for the group in the terrain is not hampered, you can’t be lost except by magic, you remain alert to danger and may stealthily scout ahead. You also are better at foraging and may track creatures more precisely.

Starting at 2nd level, you gain spirit sight, which translates to advantage on Dexterity saves versus threats you can see, including traps and spells – but you do lose this if you’re blinded, deafened or incapacitated. Curious that being restrained does not hamper this. Oh well. Ability score improvements are gained at 4th level and every level thereafter as well as at 19th level. 5th level yields primal protector, which lets you use your action to make all beasts within 30 feet indifferent to you and yours on a failed Wisdom save, potentially charming them. Problem here: The pdf does not specify the save DC. Analogue to e.g. the wizard’s school of enchantment, this should probably be the spell save DC. The shaman may use this twice per short or long rest. 7th level yields an aura that grants you and your allies within 10 ft. advantage on Constitution and Wisdom saves. 9th level grants something pretty damn strong: When you hit a creature, you gain temporary hit points equal to the damage caused, but “only” once per round. This is problematic. If you take a look at the PHB, you’ll notice that temporary hit points are usually granted by limited resources and are generally not something that is available in indefinite quantities.

Let me demonstrate why this is broken beyond the math and can seriously wreck immersion (readers familiar with my PFRPG-reviews know where this is going): Take a bag full of fluffy, cute kittens. Before combat, whenever you have a spare minute, you take one out of the bag and MASSACRE it, preferably with a really big, nasty weapon or similar means. You gain temporary hit points that have no duration. The feature does not even have the “hostile creature” caveat (granted, you can cheese that by starving kittens prior to slaughtering them…), much less a duration or a challenge-CR that posits a minimum creature power to gain the benefit, meaning that it’ll last until depleted or a long rest. This ability needs a rewrite.

At 11th, 13th, 15th and 17th level, you gain spiritual whispers – these would be a 6th, 7th, 8th and 9th level druid spell respectively, that you can each cast once per long rest interval sans expending spell slots. 18th level decelerates your aging to make only 1 year of your lifespan pass for every 10 you live. As a capstone, you increase Wisdom by 4 and treat 24 as the new maximum score.

The class also features the shaman path class feature noted before, with 3rd level (surprise) providing the choice and 6th, 10th and 14th level featuring the respective path abilities. A total of 4 such shaman paths are provided, with the first being the corruptor, who gains several necromancy-themed spells added to the spell list. As a formal complaint, the spells are not properly italicized. 6th level attracts a foul spirit that imposes disadvantage on concentration checks, but also curses those that attack you, once per turn imposing disadvantage on the attackers next attack, saving throw or skill check. 10th level is nasty: As an action, you can touch others and, on a failed save versus the spell save DC, the target receives one level of exhaustion! Finally, 14th level nets a 30 ft. aura that may be amplified towards one creature, causing it to become frightened and forcing it to Dash away until it’s out of sight or beyond 60 ft. away. Slight complaint here: The ability does not specify the action the focus of the dread-inducing aura requires. It could very well be a bonus action or reaction…

The second path would be the path of the elements, which nets resistance to fire damage at 3rd level. Additionally, it allows you to attack with an elemental blast of flame as a bonus action, inflicting 1d8 + Wisdom modifier fire damage. Okay, so is the shaman proficient in this? Is it a spell attack? Is it a melee attack? Elemental blasts of fire sound like ranged weaponry to me, but the feature does not clarify that. 6th level yields resistance to acid and the ability to breathe both air and water as well as immunity to poison damage (WUT? Poison immunity, ALONE, is the 10th level monk feature!) AND a swim speed at full movement rate. 10th level yields a flying speed at full movement rate and 14th level lets you cast conjure elemental (not properly italicized) 1/day without using spell slots or components. Somewhat weird to see 1/day here, since pretty much everything in the class is tied to rest intervals.

The path of the spirit nets the shaman an invisible spirit guide that provides advantage on initiative rolls, prevents being surprised while conscious and negates creatures gaining advantage on attack rolls when being hidden from you. At 6th level, any weapon wielded deals damage versus incorporeal targets, regardless of resistances to the weapon’s damage type…which sabotages the rock-paper-scissors-component I so enjoy in 5e…so not a fan. The shaman also gains resistance versus the attacks of incorporeal creatures. Soooo, does this extend to creatures rendered incorporeal by magical means? Could I e.g. theoretically render a golem incorporeal and then pick it apart with a dagger? Starting at 10th level, the shaman can have the spirit guide take care of concentration for him, but may not cheese the spells-in-effect-limit thus – nice one! At 14th level, the shaman can turn incorporeal as an action and takes damage if he ends his turn in an object. He also “does not invoke attacks of opportunity” while incorporeal. I sure would hope so! Who’d want to invoke those? Kidding aside, “attacks of opportunity” is Pathfinder rules-language, not 5e. And becoming flat-out immune to opportunity attacks is OP; after all, being incorporeal has no cap, no limit and is extremely strong on its own.

The final path would be the path of the wild and comes with a massive table that lists totems alongside characteristics and the respective features gained. A total of 17 such are included here. These range from the flavorful (basically blindsight) to gaining pseudo monk tricks that culminate for one totem in the option to execute two unarmed attacks with an Attack action that cause your choice of 1d6 physical damage type and is considered magical, limited flight, etc. There are a couple of minor formatting hiccups here as well.

Editing and formatting are okay, if not as precise as usual for Tribality Publishing – I noticed both typo-level glitches and quite a few rules-language issues. Layout adheres to the characteristic, nice two-column full-color standard with photography-style artworks. The pdf has no bookmarks, which constitutes a comfort detriment.

Michael Long’s shaman is an odd one: I expected to see a lame druid rip-off…and the good news first: The shaman is very much its own entity and has a unique playstyle, with spells being more of an afterthought here.

The thing is, as much as I love the often very flavorful options, the class gave me serious thematic whiplash. I mean, what do you think when you hear “shaman”, class- and competence-wise?

If it’s anything but “best tank base class”, you’ll experience the same flavor disjoint here. The shaman receives a n impressive amount of resistances, immunities and tanking options that make it better as a melee tank than you’d expect from a d8 HD class. In fact, the tanking support fighter is pretty much the core competence of the class…which is really odd…and somewhat at odds with the flavor of the class. Indeed, the closest analogue to the core classes would, surprisingly, be the monk, with a bit of spellcasting added for good measure. So yeah, felt the definite need to note the weird focus of the abilities of the class.

Which brings me to the elephant in the room: The class has some downright broken features that require revision and generally is very strong. It makes for an expert outdoorsman/utility guy that gains more resistances and immunities than any other class I have encountered for 5e. And honestly, that’s not “shaman” to me. That being said: The class is not bad per se, just flawed. If the hiccups are ironed out, I’ll shrug and accept the shaman as a tanky monk-style class, but the flaws are here.

That being said, the class is not expensive – for 2 bucks, it is something you can check out, though most groups will require some design work to make this class operate at full functionality. As such, my final verdict will clock in at 3 stars.

You can directly support Tribality Publishing here on patreon!
Endzeitgeist out.