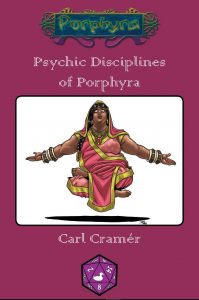 This installment of the “of Porphyra”-series clocks in at 10 pages, 1 page front cover, 2 pages of SRD, leaving us with 7 pages of content, though they’re formatted for A5 (6” by 9” size), which means you can fit 4 of these pages on one sheet of paper if you’re printing this out.

All right, so let’s take a look at these psychic disciplines!

The first discipline herein would be the aura discipline, with phrenic pool governed by Wisdom. A slight complaint here – it would have been nice to have the bonus spells with superscript indicators of their sourcebooks, but oh well. The discipline allows the psychic to glow at-will, using phrenic pool to intensify the potency of the glow to dispel/counter darkness. Manifesting the aura doubles as a practitioner of the way of the force (which was introduced in Unarmed and Dangerous), with all relevant rules provided – namely that this acts as mage armor. Nice: The ability takes into account the interaction with the read aura skill unlock! 5th level lets bracers or armor stack with your mage armor and 13th level , you can expend one phrenic pool point for judgment light, with a second judgment available for +2 points.

Cathexis would be next – the process of investing psychic or emotional energy in an object, place or the like to bring an effect into being, in case you did not know. The attribute governing the pool would once again be Wisdom, and the discipline adds Summon Good/Neutral/Evil Monster as bonus feats and when summoning a creature with the appropriate template, you have control over the precise alignment regarding the law-chaos-axis of the beings you call forth. When calling forth a creature whose alignment matches your own, you can either decrease casting time to a standard action or increase the duration to 1 minute per level, with a limit of one such summoning active at a given time – thankfully. 5th level yields Augment Summoning and allows you to undercast summon monster spells, allowing you to replace discipline bonus spells. Interesting idea there. At 13th level, when you conjure forth a being further removed than one step on the alignment axis, you can enhance the duration or reduce the casting time analogue to the lower level ability, representing you calling forth the beasts from your Id.

Duelists also employ Wisdom as governing attribute for the phrenic pool and may cast intellect fortress, mental barrier, thought shield and tower of iron will even when flat-footed or prevented from taking a standard action. Interesting: If you cast one of these spells in the previous round, you may cast a spell of this list of a lower level without expending a spell slot, allowing for combos. At 5th level, undercasting ego whip, id insinuation, mindthrust or psychic crush adds Heighten Spell and makes the spell clock in at its maximum potency, which is pretty damn strong. 13th level, finally, lets you cast one of the defensive spells from the previous list 1/round as a free action, even if it’s not your turn. (Nice catch regarding free actions!)

The kata discipline is governed by Charisma, offering true strike, spiritual weapon and later blade barrier and even mass defending sword. The discipline yields proficiency with a weapon of your choice (with unarmed strikes being a viable option, granting Improved Unarmed Strike). You gain Weapon Focus in the chosen weapon when choosing a simple or martial weapon. When you inflict damage with this weapon, you regain phrenic pool points – which brings me to an oversight that renders this broken: A) Lack of a kitten-proof caveat. B) All comparable phrenic pool replenishing discipline abilities have a daily total cap that is absent from this one in a very unpleasant oversight.

The discipline modifies spiritual weapons etc. to duplicate your kata weapon, also allowing for proper interaction with Weapon Focus, provided you have it. 5th level lets you replace a thought component with a somatic component and may use the weapon-wielding kata hand for the like. 13th level provides auto-success when casting psychic spells defensively…which is pretty OP. Why not instead grant a massive bonus?

The psychic surgeon discipline is similarly governed by Charisma and gains several healing-themed spells added to the list of spells known in addition to the bonus spells. Problematic: You regain phrenic pool points for using cure spells to revive creatures from unconsciousness. I’ll pull out the bag o’ kittens…and yes, the spells still limit this, but that limit exceeds that of comparable phrenic regeneration and can be cheesed easily. Not gonna get near my game. 5th level unlocks the inversions of the healing spells as well and 13th level makes healing have a range of close instead.

The final discipline would be yoga, which is governed by Wisdom and nets Escape Artist as a class skill and adds class level to such skill checks. Thought or emotion components of spells can be replaced with somatic components, but at the cost of being susceptible to arcane spell failure if you do. 5th level doubles self-targeting only spell durations. At 13th level, both thought and emotion components may be replaced in favor of somatic components.

Editing and formatting is very good on a formal level, though the rules-level has some balance issues. Layout adheres to a printer-friendly 1-column standard and the pdf has no artworks beyond the cover. Nice: The pdf is fully bookmarked, in spite of its brevity.

Carl Cramér delivers some interesting psychic disciplines herein, though a few of the options herein lack crucial balancing caveats included in comparable disciplines. That being said, the low price does help here and the pdf, while not perfect, can make for an interesting addition to the game, making it pretty much a mixed bag, slightly on the positive side. My final verdict will hence clock in at 3.5 stars, though I can’t round up for it.