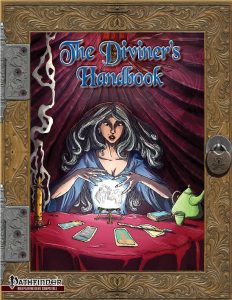 This installment of the expansion-series for Spheres of Power clocks in at 34 pages, 1 page front cover, 1 page editorial, 1 page ToC, 1 page SRD, 1 page back cover, leaving us with 29 pages of content, so let’s take a look!

We begin this expansion of the Spheres of Power-rules, as has become the tradition herein, with a nice piece of introductory prose before tackling new archetypes, the first of which would be the psyforensic, who gains a magic talent whenever he would gain a caster level and the divination sphere at first level; at 3rd level, the archetype may spend an hour to conduct the autopsy ritual, an absolutely amazing new ritual that was missing hardcore from the rules. A solid little archetype that is supplemental by the hallucinogen discovery/talent, which nets the chosen divine alternate divination ability -this may sound like something brief, but it is a pretty complex operation.

Nice to see: Occult Adventures get some love with the Psychic Medium with class level + Charisma modifier spell points and the divination sphere with limited divination as well as sharing divine or sense at touch (maximum number of affected targets provided) instead of shared séance as well as 3/day spirit communion, replacing channel haunts. The medium receives a nice spherecasting spirit, and it better should, since it has no access to hierophant or archmage.

The blind swordsman samurai employs the War sphere’s totem of war, totem of allegiance (latter not properly italicized) and blind fighting; solid take on the trope, though I’ve written a more complex take on it – still, no complaints. The eldritch cultist thaumaturge does not risk losing magic via forbidden lore and instead has a chance to be subjected to confusion, with cumulative failure increasing the respective likelihood. EDIT: Mea culpa! The ability actually is exploit-proof! The archetype gains invocations at 3rd level at -2 levels in exchange for getting the divination sphere at 1st level.

The treasure hunter unchained rogue gets class level + Int-mod spell pool and is pretty much defined by the 5 new rogue talents introduced, which allow for better spherecasting, minor hedgewitch poaching, great memory and prescient dodging when unarmored and -armed. Familiars can take the Beast of Omen familiar archetype to replace share spells with sense – nice! The Hedgewitch can take the new Font of Inspiration tradition, which nets an inspiration pool akin to an investigator equal to 3 + 1/2 class level, 5th level studied combat and extra inspiration and investigator talents as well as prescient dodger, Expanded Divination and a +2 bonus to the Casting Ability Modifier being featured among the tradition secrets. The final option would be the Tactician incanter, which allows for once per round, no action required reroll of any attack or save, usable 3+ casting ability modifier times per day, replacing Forewarned. The second ability lets you share the information gleaned via the respective divine talent, replacing diviner’s fortune.

Now onwards to the basic magic-section! We begin with some rules clarifications: The divine ability still allows for free action. Since divine is an emanation, it collects information on the area at the time of the casting and overwhelming auras exceeding HD/CL by 10+ stun the target. The list of alternate divinations is expanded herein: Alteration allows for the identification of shapechangers; Creation can let you find components for the things you seek to produce; Dark sphere users may divine the area even in magical darkness or the presence of creatures native to the plane of shadow. Destruction lets you determine damage type and amount taken. Enhancement provides means to detect, bingo, short-term bonuses on creatures. Fate users can divine the top 3 general things that matter to beings nearby from among a general list that thankfully lacks the annoying metagamey aspects of many a divination…as well as the general alignment, color-coded for your convenience.

Light users can enhance Perception and get free Perception checks (VERY useful!) and Nature spherecasters get unique benefits depending on the package chosen…which is neat! The Protection sphere allows you to determine lowest/highest AC. Telekinesis nets you density and weight and the presence/absence of the incorporeal. Time spherecasters can divine what has happened in the recent past (you can make AWESOME modules from such an ability!), while War lets you see through mud, fire, blood and slick as well as the presence/nature of those openly allied with the spherecaster. Finally, Warp users lets you determine portals, rifts, teleportation circles and the like.

A total of 18 basic talents are introduced here – from an adaptation of augury to detecting spellcasting capability, teleportation or thoughts…and better monster lore tricks, alternate divinations, faster divinations and those that linger can be found. Nature-savvy, object reading, scent and prescience are nice. I also really liked the option to cause nonlethal sensory overload, locking down spherecaster and affected target, slowly subduing the target. Sharing Perception, reducing ranged-based penalties, tremorsense and the like are nice and I really liked sifting through the collective impressions of a city for information.

A total of 8 advanced talents are next, with alternate divinations covering sight in darkness, lifesense, spirit sense, storm vision, thoughtsense, touchsight and nondetection spell wards. The divine identity would wreck havoc with the vigilante, but thankfully, the pdf takes that class and its peculiar requirements into account. Noticing planar origins of teleporting beings, increasing sight, penetrating stone or metal with divine and trapfinding are now all included in the arsenal of diviners, as is an option to see through solid matter.

Regarding incantations, the 5th level oracle incantation, which may cause madness on a failure, makes for a cool addition to the fray. Samsaran receive a new alternate racial trait and the pdf sports 7 feats – which include the spherecasting adaptation of Dreamscarred Press’ superb Lurker in Darkness-feat, which allows characters to move undetected through special sensory tricks. Augur of Combat is also cool, netting you Int instead of the usual attribute modifier to attacks as long as you act last in the initiative order. Cool! Using MSB or CL for divination talents and precognition-based insight bonuses to AC as well as expending spell points as immediate actions to reduce crits to regular hits make sense – it’s the spidey sense! There’s also a save-version of the latter and there is a feat that nets you bonuses to atk and damage depending on your divination skills, including incremental miss-chance ignoring and the option to no longer be flat-footed while maintaining divine. The pdf also nets us 4 cool new traits, all properly codified by trait-subtype.

The pdf also features two drawbacks – limited penetration and shaped divination, the latter being conical rather than sphere-shaped. I like both very much! Amazing: The pdf comes with one of the underused and amazing alchemical recipes for Kuoki – kudos…can I please have more? Two potions that transcend their spell-in-a-can-nature by nice fluff and the foci of the diviner, a scaling magic item as per the Unchained rules, are neat. A total of 20 dowsing rods to detect various things are amazing as well.

The bestiary begins with a CR 3 Elusa Hound, a hunter that can track auras. Similarly declared a sibyl, there is a CR 1/2 variant samsaran. The CR 5 typhloter nadir, a non-eudclidean starfish-like critter is pretty neat and just the first of these – for a CR 10, 15 and 20 typhloter can also be found – though their progressions are pretty linear, gaining “only” more spherecasting tricks, with only the CR 20 critter gaining a new signature ability. Still, I like these regarding the concept and would have wished these had an artwork – the prose makes them sound intriguing. Absolutely amazing, though: The virulent sensor template – insane, insubstantial and naturally stealthy, I adore this one.

Editing and formatting are pretty good, though not as precise as in some other books in the series. Layout adheres to a solid two-column full-color standard and the pdf comes with nice full-color stock art apart from the cover. The pdf comes fully bookmarked for your convenience.

Derfael Oliveira’s take on diviners is one of the better books on the subject matter you can find: You see, writing for divination is HARD. Most of the time, the options contain tricks to gain metagame information and thus interrupt a sense of immersion. This pdf, for the vast majority, remains firmly within the realm of the game, which is a HUGE deal for me. The character options within exhibit a WIDE sense of knowledge of what’s out there: The author manages to work well within the paradigms of ACG, Occult Adventures, Incantations, etc. – in short, he’s done his homework! Adapting one of the best feats DSP has ever made is a big plus for the system of Spheres of Power as a whole and there are few things to truly complain about. The autopsy ritual was long, long overdue and, as a whole, I enjoyed this book much more than I figured I would. At the same time, the archetypes and monsters lack the flashy WOW-factor that some of the other books in the series have – you know the truly unique tweak of the base mechanics that sets a given option totally apart. This is me complaining at a high level, though – as a whole, this book is well-crafted and provides a lot of important and rewarding options for Spheres of Power. My final verdict will hence clock in at 4.5 stars, rounded up to 5 for the purpose of this platform.

You can directly support the creation of more of these books here on patreon!
Endzeitgeist out.