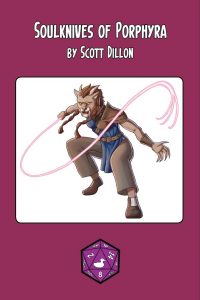 This pdf clocks in at 24 pages, 1 page front cover, 2 pages of SRD, leaving us with 21 pages of content, though it should be noted that these pages are in A5/booklet-size (6” by 9”) regarding their layout.

The pdf begins with a new archetype, the brutal soul, who receives the ability to scar himself, reducing hit maximum hit points permanently to gain natural AC, with the exact limit being governed by the class levels achieved so far, with 4th level and every 4 levels thereafter increasing the maximum bonus he can thus grant himself. The first level bonus feat choice is modified and the archetype replaces form mind blade with form brutal mind blade, which represents a variation of it and thus still counts as it for the purpose of prerequisites and similar interactions. The brutal mind blade shaped can either by two one-handed weapons at 1d8 base damage or a two-handed one that clocks in at 2d6, with 19-20 as threat range. Base damage type is changed upon shaping it, but this particular iteration may now be used in conjunction with feats that decrease offense capabilities like Combat Expertise. At 2nd level, instead of gaining a blade skill, the archetype may add 1/2 Str-mod instead of Dex-mod to Ref-saves and AC, and starting at 6th level, full Str-mod is used instead, though e.g. max Dex-bonus still limits AC – nice catch! At 34rd level, whenever he confirms a crit, he gains a +4 bonus to Str for Con-mod rounds, increasing that to +6 at 9th and +8 at 15th level. 3rd level also allows for the use of a mind blade that is at +1 size category and lets him be treated at a size larger if it is benevolent to the character. These replace psychic strike.

The mind blade skills for the archetype are limited., but he does receive 3 new blade skills: One lets him gain the Str-bonus when attacking a flat-footed foe (which can be kitten’d, though it remains an inefficient tactic), activate the ability via psionic focus expenditure (nice) or increase the Str-bonus granted thus. Basically, the class is all about maxing your Strength. I’m not the biggest fan from a concept point of view, but the execution is pretty solid and the rules-language holds up.

This file also has something to offer for fans of Path of War:

Soulfangs of the Protean Lords must be chaotic and receive a modified class skill list and gain proficiency in the protean lord’s favored weapon. This favored weapon also fixes the form of the mind blade the archetype shapes. Instead of shape mind blade, these guys select a domain power chosen from those of the protean lord, using Charisma instead of Wisdom as governing attribute. Instead of psychic strike, the archetype receives access to maneuvers – they begin play with 3 known maneuvers, of which one may be readied, as well as 1 stance. Each level is treated as a full initiator level and they employ Charisma as governing attribute. They may learn up to 15 maneuvers, have up to 5 stances and the maximum level they may have would be 6. Maneuvers readied are slightly random: One maneuver readied is chosen to be immediately granted and one other maneuver become available once the soulfang enters combat in every round. If that sounds familiar, well it is kind of akin to the mystic’s randomizes maneuver-gains. At 4th level, 10th and every 5 levels thereafter, another reliably available maneuver may be chosen each time.

Nice: The respective alternate recovery methods are mentioned. A total of12 protean lords are introduced here, with the granted disciplines, weapon, etc. -I nice array indeed…though it does leave me somewhat puzzled: The soulfang’s weapon is locked into one shape and said shapes obviously do not cover all respective disciplines, which makes me believe that the associated weapon mechanic of Path of War has been somewhat overlooked…or does the shape of the weapon count as associated, depending on the shape chosen? Each of the protean lords mentioned here features its own ability pertaining the mind blade: From throwing it to whirlwinding maneuvers (which can be BRUTAL), the combos here are pretty powerful, as befitting an option for the increased power-level employed by Path of War. One of them who focuses on shields even receives a unique, custom mind shield bonus enhancement selection. Pretty intriguing: We get quite an array of blade skills, each of which is associated with the use of a discipline. While they vary somewhat in potency, they generally are interesting – though e.g. gaining 5-ft-movement after “all attacks” warrants some clarification: Does this count as 5-foot-steps? AoO or no? Lets this ability enter one such step after an attack/in the middle of a full attack…or is it supposed to result in multiple such steps? There are some issues in precision here, though they crop up at a significantly higher complexity than in previous offerings by the author. The archetype may btw. also gain stalker arts via blade skills.

The pdf also sports another archetype called the soullasher, who replaces proficiency with medium armors with those for whips and scorpion whips. The damage-type of the mindblade in whip form may be modified and 1st level nets Whip Mastery, while second level nets Improved Trip and the toppling strike blade skill, replacing throw mind blade. 6th level allows for the at-range use of the whip (15 ft.) as though it was a hand, with sample DCs (use atk) being given – this allows you to grappling hook, try to break your fall (instead of Ref-saves), swing over chasms…pretty cool! RAW, the object manipulation should probably specify that the Dc pertains unattended objects, but that’s a minor hiccup. Extended reach and mindwhip disarming would be the new blade skills here.

The pdf also sports favored class options for the Porphyran races -as an aesthetic complaint, RAW there is neither holy nor chaotic damage in PFRPG, part of these enhancements to these “damage-types” are based on design-concepts employed in Path of War, but last time I checked, Path of War did NOT have chaotic damage…so…make believe damage type. Yay. The pdf concludes with a sample CR 12 erkunae soulfang of Zaelendris, one of the protean lords.

Editing and formatting are good on a formal as well as on a rules level – the pdf represents a HUGE step up when compared directly to the previous two pdfs by the author. Either the author has improved vastly or this was developed by someone with a lot of care. The pdf sports no artworks apart from the cover, but comes with full, nested bookmarks for your convenience (though the protean lords of the soulfang don’t get individual bookmarks).

Scott Dillon’s soulknives of prophyra are SIGNIFICANTLY better than anything else I’ve read by the author. the rules-language is more precise and actually takes complex concepts and, for the most part, gets them across pretty well. The options may not be perfect in each iteration, but as a whole, there is something to enjoy here. The Path of War option takes the increased power-level of the system into account and while its engine sports a minor hiccup and while not all discipline-associated blade skills can be considered to be internally consistent in power, it is still a relatively solid option – not perfect, mind you, but yeah.

The other two archetypes, while never reaching the level of genius of e.g. Dreamscarred Press’ Living Legend, still provide concise takes on the respective tropes. As a whole, this pdf has surprised me in a really positive way after the less than stellar installment on psychic warriors and cryptics.

This one is well-worth getting if the concepts interest you and you’re willing to sand off some very minor rough edges. Hence, my final verdict will clock in at 3.5 stars, rounded up to 4 due to in dubio pro reo.