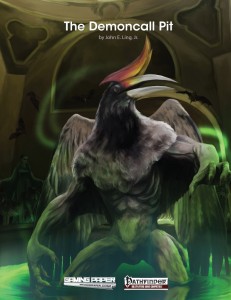 This module clocks in at 35 pages, 1 page front cover, 2 pages editorial/SRD, leaving us with 32 pages of content, so let’s take a look!

All right, still here? There we go! The Cellend family has been haunted by a prophecy most dread – according to the premonitions, one of their scions was destined to one day initiate a demonic apocalypse of “opening the worldwound”-level of catastrophe. Unlike many a stereotypical plot like this, though, the family took counter-measures -prohibiting careers as arcane casters, instead focusing on virtue, bringing forth paladins galore over the ages. Alas, as often, the true cause of the prohibition was lost to posterity and thus, Lady Astriel Cellend, born with a superb array of powers, seeks to undo the unjust restriction based on her family – guided by voices she does not understand, she has ventured into the family crypts to once and for all rid her family of the obsolete traditions. Unlike many a tradition/superstition, though, she is walking right into a trap, potentially fulfilling the prophecy and bringing unprecedented doom upon the world.

Via various hooks, the PCs can be on the very hunt of lady Astriel, entering the crypts – and once again, defying expectations, the family’s former heads were not bumbling idiots, actually foreseeing something like this catastrophe looming, they have hidden clues throughout the dungeon to initiate a counter-ritual. These clues, present throughout the rooms, provide essentially a complex puzzle for the PCs to unravel as they explore the complex. Better yet, there are other things in favor of the PCs braving the catacombs tainted by the abyss. Remember that planescape maxim on the difference of effectiveness between devils and demons, where demons only reached a 13%? Yeah, these guys are chaotic and have a vast array of different liege-lords and thus, clever PCs might actually incite hostilities between the diverse abyssal threats, which include btw. fiendish grizzly bears, skitterdarks balbans (originally from FGG’s Tome of Horrors, provided with full stats) and classics like babaus, cambions, shirrs etc. It should also be noted that aforementioned clues more often than not feature visual representations as plaques .

Iconic, rarely used creatures like an abyssal maw can be found herein and the final encounter is a BEAUTY – multiple waves of deadly demons surging forth, while the traumatized (but not beyond redemption) Lady Astriel assaults the PCs with her magic in a massive, epic final conclusion – but that is NOT the end. As long as Astriel’s ritual is not undone, the demonic taint and danger remain – hence, the PCs will have to brave frighteningly powerful demons in a kind of second climax – and yes, the counter-ritual might very well be something your players fail to perform if they have not paid enough attention…

Editing and formatting are top-notch, I noticed no significant glitches. Layout adheres to Gaming Paper’s printer-friendly two column b/w-standard and the cartography provided is nice. Here, something special should be mentioned – you can essentially have the whole massive map as battle-tiles and assemble it as your PCs go, provided you have the tiles (sold separately as the Mega Dungeon II-set) -neat! (Fret not if you don’t have them, the module’s map still is nice and can eb run easily.). The module has no artworks apart from some of the plaques encountered in the dungeon. The pdf has no bookmarks, which constitutes a significant comfort detriment.

John E. Ling Jr. delivers a surprisingly versatile module here – I expected “been there, done that”-territory and instead received a thoroughly compelling mid-level module that does something right many modules get wrong – it takes PC capabilities into account. Damaged mosaic? Mending. – Similar awareness of the system and its interactions in game show a thorough grasp of rules and play in practice. The exotic demons provided also help this module in its diversity and the smart story that does not presume that all NPCs are idiots also felt pretty well-crafted.

Now even if you utterly dislike puzzles, this module has you covered as well with advice and finally, the option for redemption and good characters to shine is great. The Demoncall Pit is a fun module and definitely ranks among the better high-level modules I’ve read for pathfinder – but one that definitely requires SMART players – if your PCs just bumble into this and try to brainlessly charge everything, they will not prevail against the demonic onslaught. Offering a smart array of clues/puzzle, challenging battles and generally, a carefully crafted dungeon makes up for the lack of bookmarks and artworks in my book.

The Demoncall Pit is a fun, old-school module with a dual epic conclusion and well worth a final verdict of 4.5 stars, rounded up to 5 in spite of the missing bookmarks and lack of artwork.

You can get this thinking group’s anti-demon crawl here on OBS!