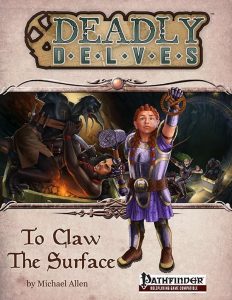 This installment of the Deadly Delves-series clocks in at 57 pages, 1 page front cover, 1 page editorial, 1 page advertisement, 1 page SRD, 1 page back cover, leaving us with 52 pages of content, so let’s take a look!

Now, it should be noted that this adventure provides a new NPC-race that is supplemented by 3 racial feats and a really kickass full-color artwork. The module furthermore includes a total of 5 new monsters and no less than 20 different fungal items; 2 cool mundane items, 2 variant weapons and 1 variant armor, a minor intelligent item, a cursed item and a tightly-codified campaign trait.

It should also be noted that the module comes with an extra Map-pdf that spans no less than 21 pages of maps, including all relevant full-color maps in a player-friendly version, both with and without grid. Furthermore, these full-color maps also encompass handy sideview depictions and maps that allow the GM and players to better picture the aspect of verticality inherent in this adventure. This is an adventure for 1st level characters, and it has, to a degree, a survival aspect. Copious amounts of read-aloud text are provided for your convenience.

And this is honestly as far as I can go without venturing deep into SPOILERS. Potential players should jump ahead to the conclusion.

The module begins with the PCs in the employ of Macharun Hardfist, who is mining the more dangerous and notoriously cave scorpion-riddled passages of Granitetop Mountain, a place where the dwarves of old unlocked the secrets of copper mining. The module begins with a bang, as the PCs deal with an infestation of purple worm hatchlings – but alas, the worm-riddled floors end up collapsing, stranding the PCs entombed in the lightless, dark passages of Granitetop.

Stranded as the PCs are, they have to contend with the deadly vermin that skitters and crawls through the tunnels, all while also looking for food, water, sources of healing…and, well, ultimately, an exit. Oh, and damaged equipment may need repairs as well! Salvage from the collapse and appropriately visceral description of the ordeal of being caught in the collapse set an incredibly strong theme for the start of the adventure. Bracing climbs and confronting underworld fauna represent a great start for the adventure, and terrain hazards similarly help set the stage for a feeling of being threatened, not by creatures, but by the general situation – something that only precious few modules manage to achieve. This proceeds to escalate via a cool haunt, and the boos for the first section, a degenerate and venerable giant that makes for a potent foe for 1st level characters!

The haunt btw. represents an inkling of the shape of things to come, as the second section of the module has the PCs explore the ancient copper mines, now inhabited by grindylow, where echoes of a more fantastic pasts, with krakens loom, and even rust monsters are starving. Translating ancient dwarven adds to the sense of exploring basically a haunted, lost archaeological site, which should show how the discovery of iron allowed the dwarves to escape the yoke of ancient giants. Ultimately, the exploration will have the PCs approach the so-called Sky Tomb – provided they can get past the Sky Shy, a settlement of disturbing fungalfolk (yes, with settlement statblock!), where help, but also danger may be encountered. When the PCs find the sky stairs (which include a cool trap!), they’ll note that a meteor strike has blocked the exit in days long past – thus, they will have to pass duergar and dire corby foes…oh, and have I mentioned the amazing running battle on mine carts, as the PCs make their way to the Sky Tomb? They’ll have to brave massive gaps and sub-encounters allow for great customization options. This section is imho enough to warrant getting the adventure!

The final section, then, has the PCs explore the Sky Tomb, hopefully surviving the derro and red dragon wyrmling there – the final boss here being the one choice in the module that I’m not 100% in love with – but that’s because I prefer my dragons huge or larger, and suitably deadly. This is, though, a personal preference and will not influence my final verdict.

Editing and formatting are very good, I noticed no undue accumulations of hiccups on either a formal or rules-language level. Layout adheres to a gorgeous two-column full-color standard and the pdf sports quite a few excellent full-color artworks. The cartography, also done by the author, is fantastic, player-friendly and should render running this module simple enough, even with VTTs. This should be industry-standard. Huge kudos! The pdf comes fully bookmarked for your convenience.

Michael Allen is one of the authors you should definitely watch. So far, he has shirked, with grace and panache aplomb, anything in his writing that would even remotely look like mediocrity or being “just” good; and this adventure is no different: What we have here, to put it bluntly, is excellence. The attention to detail and amazing atmosphere, the creative set-pieces that organically flow together, the blending and development of themes – they all fit together so well. It’s weird, really – the adventure is, for all intents and purposes, very technical in its craftsmanship. At the same time, though, it also manages to evoke a sense of atmosphere you only very rarely get to see. In fact, this felt in many instances almost like an OSR-module, with so much care poured into the details, the small bits. There is a subtle, playful artistry in this adventure, one that made me reminisce about Tomb Raider, about some survival movies, about classic dwarven-themed adventures and underworld exploration…but at the same time, the adventure manages to somehow transcend all these diverse influences, weaving them into something distinct, novel and exciting.

I’ll just come out and say it: This is one of the best 1st level modules available for PFRPG. It’s, in fact, good enough to warrant checking out even if you play another system. This is a true gem, and will receive 5 stars + my seal of approval, granted without any hesitation. It also qualifies as a candidate for my Top Ten of 2017.

You can get this excellent adventure here on OBS!