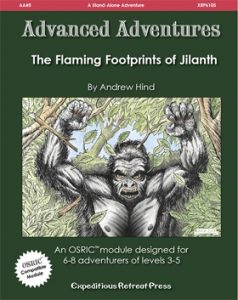 This installment of the Advanced Adventures-series clocks in at 18 pages, 1 page front/back cover, 1 page editorial/ToC, 1 page advertisement, 2/3 of a page SRD, leaving us with 14 1/3 pages of content, so let’s take a look!

This module is intended to be used in conjunction with the OSRIC-rules, though, as always, modification for other old-school games is pretty simple; similarly, conversion to more rules-heavy systems is very much possible. The adventure is intended for 6 – 8 characters level 3 – 5, though third level PCs may face some casualties – this is not an easy adventure.

As usual for the series, we do have some deviations from the formatting conventions, with magic items bolded. Oddly, the item among the 5 magic items that is most crucial has its reference in the adventure text not bolded – instead of referring to the item by proper name, it is noted as by its reputation, with a longer description that lacks the tell-tale bolded formatting. Cartography featured is functional and b/w, though no player-friendly versions/VTT-versions are provided. The module includes 4 distinct creatures, all of which are unique and flavorful – I will note these in the discussion of the content itself.

All right, this is as far as I can go without diving deep into SPOILERS. Potential players should jump ahead to the conclusion.

All right, only GMs around? Great! So, this module begins when the PCs are hired to investigate troubling occurrences: The Lord Admiral of Ranste, a thriving trade port, has vanished, and the streets are lined with the eponymous footsteps, all aflame, tell-tale trademarks of the long vanquished, legendary pirate Firebeard. The PCs are tasked to travel to the hex-mapped Isle of Jilanth, where the pirate once dwelled, and find out whether he has risen from the grave – and find the Lord Admiral, if possible.

The wilderness exploration of the island, just fyi, comes with a pretty nice wandering encounter table, which focuses on animals and vermin, including a one-horned variant of a Triceratops and three unique, scripted events, which feature undead crocodiles, carnivorous apes, and a site where human explorers once committed an act of genocide versus the lizardfolk natives. Yes, this section already is pretty damn cool.

Here is a structural peculiarity of this module: In a way, the adventure could be solved in a variety of ways and encompasses three different locations, which could all stand on their own. Their sequence, similarly, is not necessarily set in stone. At the same time, running the locales in the default order makes sense, as the dungeons connect and transition in a sensible manner.

The first of these locations would be the caves that once were inhabited by the pirates: Here, threats from crocodiles to piranhas await, and PCs can well fall prey to the rather challenges environments. A survivor of another adventurer party may be saved (potential replacement PC, the first such NPC encountered – remains of further members, barely alive or dead, can be found throughout the adventure), and beyond giant spiders, the suddenness of the pirates being killed still suffuses the place: From the creepy cellblock (with a nasty trap and some really creepy imagery) to the puzzle fight against the rope horror, one of the new critters and a thing of deadly…ropes, the complex rocks. Heck, the PCs may end up facing off versus a mummy voodoo witch! Amazing!

From there, a tunnel leads deeper into the mountain, and the second location beckons – an ancient gnomish enclave, where the inhabitants inadvertently unearthed something that deformed their children, making the gnomes slowly degenerate into cannibalistic madness – now, just a rubbery, disgusting hold creeper preys on explorers through these silent, deadly halls. And yes, PCs can actually research what happened here. The funeral rites of the lost culture allows greedy PCs to float a boat on the hold’s “river of the dead” to the tombs, potentially getting rich loot – provided, they survive the nasty countermeasures, that is!

Following the river upstream will lead the PCs to the abode of Jilanth’s wizard, Lazio Sharpe – coming through the subterranean, aquatic backdoor, the PCs thus can bypass the “wyvern” at the gates and deal with the seemingly mad wizard…though they will notice something odd: The wizard seems to have been replaced by a wax doppelgänger of himself, one that has managed to exile his master – once more, the PCs can actually find out about this if they do their job. Dealing with the doppelgänger of the wizard still does not solve the mystery of the culprit of the footsteps though: Clever PCs may note that the wax creatures have exiled their master, and thus explore the jungle – and indeed, Lazio has been captured by the local lizardfolk, who are in the process of making him a ritual feast! Unfortunate here: The lizardfolk encampment lacks a map, making the climax of the module somewhat weaker than it should be. Still, the wizard can reward the PCs,s hould they save him, and the mystery of the boots and flaming footsteps is resolved…but where is the Admiral? That’s for the GM to decide!

Editing and formatting are very good on a formal and rules-language level. Layout adheres to a classic two-column b/w-standard with a few nice b/w-artworks. The pdf comes fully bookmarked for your convenience. Cartography is functional, but lacks player-friendly versions and the final locale is not mapped.

Andrew Hind’s “Flaming Footsteps of Jilanth” is the best of the early Advanced Adventures. Each of the three small dungeons has a strong, evocative leitmotif; story matters and PCs that explore thoroughly are rewarded with the means to understand what’s happening. Risk and reward are well balanced, with the deadlier, optional components also providing better loot. In structure and atmosphere, this is excellent through and through, though the absence of a map for the final locale, and the lack of player-friendly maps do slightly mar what would otherwise be a thoroughly excellent adventure.

This is still very much worth getting and comes recommended by yours truly: My final verdict will clock in at 4.5 stars, rounded down.