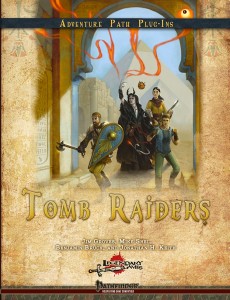 The most interesting component of the Mummy’s Mask AP, beyond the focus on a kind of archeology-like theme, is the competition between teams of explorers, at least to me – alas, NPC-groups of rivals take a lot of space to properly portray…and it is here this book comes in. What we have here is an array of competing adventurer groups, ready to really sour the day of the PCs, with the first being Eskelpian Acquisitions (Unltd). Led by the alchemist Alermo Eskelpian, plus rogue, brawler and sorceror, this group is interesting in that it works like a slightly more professional murder-hobo group: They try to get the material and then get the hell out – preferably sans bloodshed, but if it can’t be helped… Beyond that, their reliance on combat-drugs adds an interesting exploitable twist to the team. One thing you’ll note right from the get-go here is that the team has its character-dynamics and methodology explained in lavish detail, a courtesy that not only makes the group more memorable, but also helps the GM properly portray them and their methods – and yes, this level of detail is provided for all groups.

The second group would be the Nazir family, united by their blood-ties: With several means of getting dupes…ehem, I mean “allies” to do their dirty work, a cultivated semblance of wealth, rogue, barbarian, sorceror and tracker make for a group tailor-made to fool others and get out – and the barbarian btw. has a new, unique rage power. One note to mention here pertains to the sometimes rather hilarious quotes also provided for the respective characters: When Jaul Nazir begins a tirade on how the desert is alive…only to nonchalantly exclude the guy they just killed from the diatribe, you’ll be smirking.

The Third group, the Twilight Four, also have an intriguing angle: Their relationship is, first of all, strictly professional and not based on sentimental concepts such as friendship: Instead, the daemon-spawn tiefling witch, brawler, skald and bladebound magus are mostly driven on by the agenda of the magus’ blade, Nightshard, which sports a hunger for esoteric lore of all kinds. Ranging from CR 5 -8, they are also some of the more competent competitors after the previous low level groups. The skald’s statblock does sport a very minor hiccup in the formatting of his hyperlinks, but nothing to truly fuss about.

As you may note, there’s a trend going on here, from shady down the alignment axis – and if the name was not ample clue, guess what – the Court of Slaughter is not a nice group. They are pretty much the opposite, consisting of a vampire cleric separatist, a mummified sniper stygian slayer, a skeletal champion boodrager and a good bard archivist – yes, these undead menaces are as deadly as you’d think and pitting their combined force against the PCs will make the players loathe these CR 12 – 9 villains even more.

Editing and formatting are very good, I noticed no significant glitches. Layout adheres to the gorgeous, beautiful 2-column full-color standard of Mummy’s Mask plug-ins and the pdf comes fully bookmarked for your convenience and with the well-made, unobtrusive hyperlinks that actually work and help. Beyond what may be one of the most beautiful layouts among the diverse array LG uses, the aesthetics-department has done a great job here: Each of the adventurer-groups gets their own 1-page full-color depiction, all of which adhere to the high level of quality you see on the cover. This is a beautiful book indeed.

It is also a pretty long book: Not only are the 4 teams of tomb raiders distinct in methodology, flavor and challenge, each of the characters contained therein has roleplaying potential galore and is memorable in some way – there is literally no filler NPC in here. Better yet, the mechanics supplement the characters well – from the combat-performance enhancing drugs to unique fighting styles, archetype-combos and classes used, the level of care and love that went into these NPCs is readily apparent. Jim Groves, Jonathan H. Keith, Benjamin Bruck and Mike Shel deliver a truly inspired supplement I wouldn’t want to miss from Mummy’s Mask games – and indeed, more so than in many AP-plug-ins, these characters can be used in just about every circumstance, thus rendering this book extremely useful even in contexts beyond the AP. My final verdict will hence clock in at unsurprising 5 stars + seal of approval.

You can get these cool NPC-teams/rivals here on OBS and here on d20pfsrd.com’s shop!

You can support the creation of further Mummy’s Mask plug-ins here on patreon!