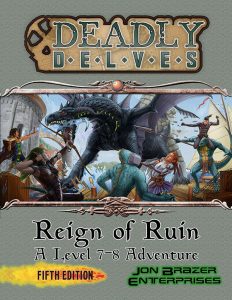 This module from Jon Brazer Enterprise’s „Deadly Delve“-series for experienced groups clocks in at 46 pages, 1 page front cover, 1 page editorial, 1 page SRD, 1 page advertisement, 1 page back cover, leaving us with 41 pages of content. It should be noted that the pdf comes with an extra-pdf that contains properly-sized, big versions of the maps – these are key-less and generally player-friendly – with one exception: There is a “S” denoting a secret door left on one of them.

Still, this leaves the PCs without much recourse – they need to stop the black dragon, asap! Thus, they venture deeper into the marshlands towards the temple of the Ixtupi. Tsiikil lizardfolk can provide support and directions, should the PCs help them. The temple of the Ixtupi is a foul stone pyramid surrounded by a great moat – to even get to it, the PCs will need to deal with potent, dragonblooded lizardfolk; the presence of stormwyts, an alkaline-spit-using wyvern-variant adds a further danger – and woe if the PCs start using elemental magics: The taint of the place causes such magic to spawn tainted elemental spirits– stats for all 4 variants are included, just fyi. Big plus in the 5e-version, btw. – the lizardfolk get, at least partially, unique actions that represent their culture: We get e.g. the Tlaloc’s Blessing reaction and similar design decisions to represent the influx of draconic blood and the peculiarities of the tribe.

The bulk of Ixtupi resistance can be encountered in the lower temple – here, the most potent of the tribe await – alongside glass golems, demons, evil idols boosting the foes of the PCs…and even a half-dragon gynosphinx – and yes, she comes with sample riddles. Ultimately, past all the traps, the PCs will have to delve deep into the place where caustic water and grueling sights await and face Nyrionaxys II…if they don’t fall prey to the hatchling ghosts of her brood mates or the half-draconic anaconda. Or the stormwyts…and yes, all of this doesn’t sound so bad, right? Well, here is a big difference to almost all adventures featuring dragons: Nyrionaxys II doesn’t wait to be slain. A full page is devoted to tactics of the mighty dragon – who btw. comes with legendary actions as well as access to lair actions.

Speaking of which: Beyond the numerous variant monsters mentioned, I enjoyed the variety of the builds: The 5e-version goes above and beyond to make the respective lizardfolk feel unique and concise; the versions of the new creatures, similarly, are interesting. As a minor complaint, though, it should be noted that here and there, very minor hiccups can be found – an attack value that’s off by one (challenge 8, thus +3 proficiency bonus, with Str 16 = +6 to attack, not +5), but these glitches are rare and the exception – the stats, as a whole, as surprisingly well-made. Among all versions of the module, they are my favorites.

Editing and formatting are very good. I noticed no serious accumulations of either formal or rules-language glitches in the module apart from a couple of minor hiccups. Layout adheres to a really nice two-color full-color standard and the pdf comes fully bookmarked with nested bookmarks for your convenience. The maps featured for all major sites are solid and full-color; apart from the minor tarnish of the remnant secret door-relic mentioned before, the inclusion of player-friendly maps is another big plus. Artwork deserves special mention: The module sports a couple of really nice full-color artworks.

In short: While this does not reinvent the wheel, it’s one of the few anti-dragon modules that did not cause my brain to hurt at one point – and that’s a big, big plus. 5e’s as a whole well-crafted mechanics help as well; to the point where I honestly believe that the mechanics of this version may be the best of the bunch in terms of creativity and how they enforce a succinct cultural identity. Were it not for the minor hiccups in the stats, I’d award this version my seal of approval as well. While thus not absolutely perfect, this still remains my favorite version of the module, directly followed by the PFRPG-iteration, which is why my final verdict will clock in at 5 stars – recommended as a fun, challenging module.