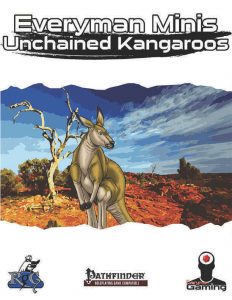 This everyman mini clocks in at 10 pages, 1 page front cover, 1 page editorial, 4 pages of SRD, 1 page advertisement, leaving us with 3 pages of content, so let’s take a look!

So, why unchain the kangaroo? Well, they don’t trap foes like e.g. wolves and analogue creatures: They actually have claws. And even the front paws aren’t as harmless as they look. Hence, we get cool alternate stats for unchained kangaroo animal companion stats on the first page – no complaints regarding them in comparison to other animal companion stats. (They advance at 4th level, just fyi.)

The regular kangaroo presented herein would be a CR ½ creature, whose kick causes bludgeoning and piercing damage (which can be a bit odd in DR-interaction) and a threat-range of 19-20. They can’t kick as part of a full attack unless their BAB is equal to or exceeds +6. Crits with kicks can disembowel you, causing bleeding wounds and Con-damage – OUCH!

Things get cooler, though – there’s a second statblock in here. Jack. Jack isn’t like other kangaroos. He is actually an awakened unarmed fighter 5 that uses Everyman gaming’s cool Unchained Fighter-rules. He is quick, deadly, and damn cool!

Oh, and folks observing him have reverse engineered his fighting tricks – represented by a Style-feat chain: Kangaroo Style decreases the penalty to feint non-humanoids to -2, -4 against animal intelligence foes. Additionally, high ranks in Acrobatics increase the bonuses gained from fighting defensively or using the total defense action. The feat also doubles as both Acrobatic and Combat Expertise for the purpose of prerequisites. The follow-up feat is Kangaroo Gait, who allows you to feint as a swift action when moving more than 10 ft. When using Spring Attack, you can instead feint the target as a free action. Kangaroo Roundhouse, the third feat in the chain, lets you add Acrobatic ranks to the damage roll on all successful attacks versus a target you feinted successfully via Kangaroo gait, replacing Strength modifier. Kudos: Feat takes the Vital Strike chain into account.

Editing and formatting are excellent, I noticed no hiccups. Layout adheres to a two-column standard with a printer-friendly, white background. The full-color artwork is nice. The pdf has no bookmarks, but needs none at its length.

Alexander Augunas’ unchained kangaroos are amazing. The critter is cool. The companion stats are nice. The awakened character? Glorious. The feats are interesting as well – what’s not to like? My final verdict will clock in at 5 stars + seal of approval.

You can get these deadly, kickass (haha!) kangaroos here on OBS!