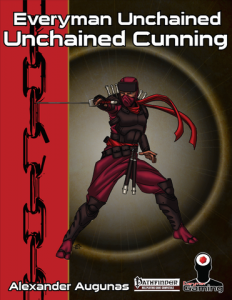 This installment of Everyman Gaming’s Pathfinder Unchained-support-series clocks in at 16 pages, 1 page front cover, 1 page editorial, 1 page SRD, leaving us with 13 pages of content, so let’s take a look, shall we?

After a brief summary that aptly explains the design-paradigm applied to the unchained ninja presented herein, we begin with the base-class: The unchained ninja receives 8+Int skills per level, d8 HD, proficiency with simple weapons, kama, katana, kusarigama, nunchaku, sai, shortbow, shuriken, siangham and wakizashi as well as light armor. BAB adheres to a 3/4-progression and Ref-saves are the strong saves. Sneak attack progression happens at every odd level and the unchained ninja begins play with Weapon Finesse (which, at 3rd level, allows Dex to damage to a chosen weapon – which still is pretty evil when used with shurikens…) and Poison Use. 2nd level retains ki pool and no trace-progression also remains unchanged.

Alright, overall, this may not seem like a too complex modification, but the matter of the fact is that the rogue/monk-synergy-tricks are pretty interesting from a design-perspective. Like this!

The poor under-appreciated ninja also receives several new archetypes herein – also, thankfully, providing a helpful sidebox regarding the lack of transparency regarding rogue talents and ninja tricks, prerequisite-wise. The first archetype is the Goto, who replaces No Trace with a Slight of Hand and anti-trap bonus as well as the Combat Swipe talent. Solid. The Hoka-han can actually properly wield torches as efficient weapons and even make them deadly – transferring sneak attack damage to fire damage is pretty unique and, rather cool, the archetype can get basic pyrokinesis and fire blast wild talents for occult adventures-support, including options to properly use ki to enhance fireblasts, but at the cost of losing some of the usual uses of ki. At 2nd level, the archetype receives an infusion instead of a talent and later levels provide free sight through fire and smoke and 10th level plus allows for substance infusions to be added to the blast- pretty cool ninja/kineticist-crossover archetype. The Kishu is interesting in that it is a demoralize-specialist (with stern gaze etc.) and deals more damage versus foes subject to a fear-based condition. The Kohan is an archetype that made me smile, for it utilizes rules from the milestone-level awesomeness that is Ultimate Charisma (seriously, get this one asap if you haven’t already!) and makes the class a powerful psychological combat specialist – like it! The Oniwaban on the other side, is a secret agent-style archetype, a master of Diplomacy and Disguising – overall, an okay one. Finally, the Star Master gets Quick Draw and may use shuriken as melee weapons and does not provoke attacks when using thrown weapons versus foes that are denied their Dex-bonus to AC. 4th level provides a Feinting melee throwing ability, which is rather neat.

Rogues also see some support, here in the guise of 3 archetypes, the first of which would be the arcane charlatan, a specialist in the magic-dabbling rogue talents and the sneak attacks actually make the target more susceptible to magic – via penalized saves etc. Beyond that, 5th level makes the magic-dabbling talents a bit wild-card-y and, at higher levels, the class can choose finesse training and a better magic dampening ability. The Bruiser-archetype adds Str-mod to Fort-saves and gains some thug-themed bonus-feats. Okay, I guess. The Contender replaces finesse training with Improved unarmed Strike and unarmed damage-progression akin to a monk at -3 levels – solid unarmed archetype.

The pdf also provides multiple different talents to gain – 3 investigator talents, 13 slayer talents and a TON of rogue talents – which btw. include a take on Chink in the Armor, which nets sneak bonus damage after sundering armor, a Dex-based throwing talent and temporarily negating the ability channel energy via sneak attack (NICE!) as well as better poisoning. More transparency between these Dex-based classes is also championed here alongside rather expansive pieces of advice for the GM to adapt rogue talents and whether or not they are appropriate for e.g. slayer etc. Speaking of the slayer: While it is no secret that I’m not a big fan of the ACG as a person, as a reviewer, I thoroughly applaud e.g. the non-lethal coup-de-grâce options for slayers as well as neat Ultimate Charisma/Psychological Combat-support here.

Editing and formatting are top-notch, I noticed no significant glitches. Layout adheres to Everyman gaming’s two-column full-color standard and the pdf sports 3 nice full color artworks, two of which I’ve seen before in Everyman Gaming supplements, while the third is new. The pdf comes fully bookmarked with nested bookmarks for your convenience.

Alexander Augunas’ Unchained Cunning sports his trademark precision regarding the handling of pretty complex rules-interactions as well as his rather pronounced ability to make precise, easy to grasp crunch. The unchained ninja is solid and so are most of the archetypes. Personally, I really enjoyed seeing further Ultimate Charisma-support herein and the talents, and archetypes are pretty neat – however, while sorely needed for the archetype-starved ninja, the archetypes herein ultimately are very much about the function and didn’t particularly wow me; they are not bad in any way, mind you – but they adhere, more often than not to the “exchange class a’s ability I for that of class b’s ability II”-paradigm, often on a rather basic level…with two exceptions: Both the arcane charlatan and the kineticist-crossover archetype are absolutely brilliant, cool and have a very pronounced and distinct feeling – these two do show what the author is capable of of.

Ultimately, Unchained Cunning is a precise, well-crafted book with some true stars herein, though they do not blaze as brightly as with some of Alex’s other works. In the end, I consider this a very good file that missed excellence just by a margin – hence, my final verdict will clock in at 4.5 stars, rounded down to 4 for the purpose of this platform.

You can get this neat pdf here on OBS and here on d20pfsrd.com’s shop!
Endzeitgeist out.