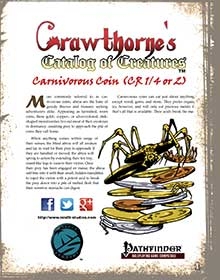 The first installment of the inexpensive creature-supplement-series by Misfit Studios clocks in at 5 pages, with 1 3/4 pages of SRD and the creature’s artwork alongside the header and contact/social site info on the first page, taking up about 1/3 of the space, while editorial information is on page 2 alongside product identity and the declaration of open game content – I’m not a big fan of this layout decision since I tend to print out books and thus, the cover features quite a bit unnecessary ink/toner used in vain…but what about the creature?

The carnivorous coin, or abroa on its own is a CR 1/2 aberration that is fine and has a nasty bite for its size – alongside a dangerous acid. On a cool side, susceptibility to Perform and music makes for an interesting weakness. A second creature-version, the CR 2 swarm of these creatures is much more powerful and the 3 adventure hooks provided also work well with the creatures alongside a brief piece of IC-prose by the eponymous Crawthorne. The one crucial flaw of these creatures, though, does pertain its very angle: These things should look like coins, yes? Well, they have Stealth, so that’s nice…but no means of actually disguising themselves/using Stealth to pass as coins – no ranks, no ability to be mistaken for coins, no ability like freeze or a similar means to avoid detection in plain sight…which left me, quite frankly, rather disappointed.

Editing and formatting are top-notch, I noticed no significant glitches. Layout adheres to a 2-column full-color standard with 2 beautiful artworks I did not expect to find in such an inexpensive little file – kudos here. The pdf has no bookmarks, but needs none. The pdf also comes with a second, more printer-friendly version – kudos again, though the imho sub-optimal aforementioned layout-choices mentioned and the social media icons retain their color.

Steven Trustrum has created a great little creature per se – but also a creature that falls short of its own potential and a layout that could be more considerate regarding the ability to be printed out. While by no means bad, this does thus fall short of excellence and hence, my final verdict will clock in at 3.5 stars, rounded up to 4 for the purpose of this platform.

You can get these inexpensive critters here on OBS and here on d20pfsrd.com’s shop!
Endzeitgeist out.