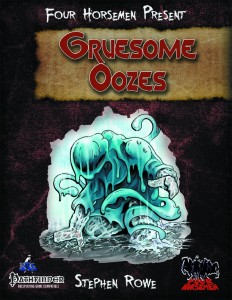 The third Gruesome monsters-supplement (for a handy list, use the Gruesome-tag on my homepage) clocks in at 13 pages, 1 page front cover, 1 page editorial/SRD, leaving us with 11 pages of content, so let’s take a look!

The first template introduced herein would be the CR+2 Intruder Ooze, a thing from a reality beyond the confines of our laws of morality and physics – subsequently, mere contact with these things breaks down the unfortunates trying to fight it; clothed in defensive alien reality, these things can tunnel through ANYTHING and, worse, even gravity breaks down in the presence of these dread globs of goo…but the creatures need to keep moving: Their reality negation destroys anything they’re in contact with…even the floor.

At CR+2, no less inspired that the previous masterpiece, would be the emulation-ooze: Basically, we have a body-snatcher here, an ooze that tries hijacking its victims…turning on their personality: The ooze actually believes it is the creature in question, making them truly disturbing adversaries that not even magic can properly sniff out.

The CR+1 exponential ooze would be the old-school, badass-version of the splitting ooze…you know, not the one with this pansy Hp-sharing, but the dread creature that actually can very quicklybecome a horrid epidemic, a flood of oozes…and one that can also divide on its own…and recombine. This is truly a great rendition of the dread blob-concept and a return to form for the much maligned and nerfed trope of the splitting ooze – love it!

The fourth template within these pages is, once again, a mythic template at CR +1/2 per mythic tier – the Hive Mind. And that template would be the answer to the question whether there is a good template to make oozes the BBEGs – with options to control its subjects, detect thoughts, absolutely perfect coordination between individual parts of the collective and the powers to assimilate and induct into its sphere of influence, the hive mind makes for a subtle and uncannily creepy adversary.

Stephen Rowe’s gruesome oozes had a difficult legacy after the superb installment on fey…and it manages to uphold the superb level of quality the predecessor established – which is a feat in itself, considering how difficult good ooze-design is. Indeed, the creature-templates here are inspired in a variety of ways that is particularly surprising once you remember how one-dimensional oozes usually are. This pdf provides a superb means to instill the fear of oozes back into your players – a brilliant little pdf well worth 5 stars + seal of approval.

You can get this stellar little template-supplement here on OBS and here on d20pfsrd.com’s shop!
Endzeitgeist out.