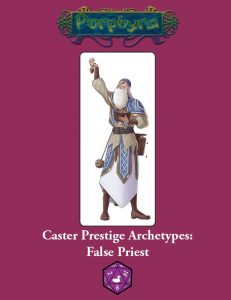 That out of the way, let us take a look at the class herein, with is built on the chassis of wizard and the false priest PrC, with d6 HD, 2 + Int skills per level, with d6 HD, 2 + Int skills per level, full spellcasting progression, good Will-saves and 1/2 BAB-progression. Proficiency-wise, they only get simple weapons. The class inherits the wizard’s arcane bond and may choose a divine focus as bonded object. False priests also receive a cleric domain, gaining the domain’s abilities and using the spellcaster level as cleric level to determine abilities. These guys cast domain spells as arcane spells, adding them to their list.

Whenever a false priest heals hit points via a spell, the healing is transmuted into an illusion (shadow) effect lasting 10 minutes per level – these stack with themselves and may not exceed the creature’s maximum hit points. This illusory healing also does not stack with temporary hit points. And this class feature alone may be worth getting the pdf. For a gritty, non-healing setting, this framework is actually really, really cool and can provide the basic skeleton of a wholly different world sans easy healing without breaking PFRPG’s assumptions.

When a false priest uses an SP or magic item, he may add mumblings and gestures to trick onlookers into believing that the power actually comes from him, with either a fixed DC or Bluff being the basis for the DC to beat with Spellcraft. Beyond these options, the false priest adds a selection of classic divine spells to his spell-list – you know, bless, flame strike, healing spells…the like.

2nd level yields +1/2 class level to Bluff checks and becomes automatically aware of magic that forces to tell the truth. 5th level nets +1/2 class level as a bonus to UMD and Knowledge (religion). 3rd level yields false channel, which is the channel energy equivalent of illusory healing, increasing its potency at 7th level and every 4 levels thereafter. Total uses per day would be 1/2 class level.

At 5th level, the false priest gets a false focus, which decreases the cost of arcane material components by the value of the false focus, up to a maximum of 100 gp – so no, no high-level cheesing. Starting at 9th level, the false priest may expend a spell slot or prepared spell of 1 level higher to activate a spell-trigger or spell-completion item for a divine spell with UMD – on a success, the effect takes place and no charge is expended.

Starting at 13th level, he may Bluff, literally, spell completion and spell trigger items instead of UMDing them – he does not need to make a Bluff skill check or UMD check when using such items, but still needs to Bluff when using false casting. At 17th level , the healing of the false priest properly heals himself – and only himself. others still are subject to illusory healing. As a capstone, the class may expend channel uses to actually heal with his healing abilities and spells.

As per the tradition of this new series, we receive information on using arcanist, psychic, sorceror, and summoner as alternate chassis-bases, so if you wanted to play a false priest based on one of those classes, you’re in luck – the modifications generally make sense to me and allow for interesting tweaks of the engine. The prestige archetype does include a significant array of class-specific favored class options for core races and unusual races – there is a minor formatting glitch in the goblin entry (it’s not bolded and purple and sports ARG behind it) and the benefits are decent.

Carl Cramér’s false priest is damn cool prestige archetype – for sword and sorcery style games, for example, or those games that want to get rid of divine magic, this is THE class to get. I’m serious: With this, you can maintain the math of pathfinder, the assumptions for damage, levels, etc., and still have a grittier game, where healing is, literally, only a shadow of itself, where the line between priest and charlatan and sorceror is blurred. I adore this pdf and its implications. Considering the very low price point, this should be an absolute must-buy offering for anyone looking for an easy tool to make a Pathfinder homebrew-setting with a different flair. It’s obviously also a great offering if you just wanted a false priest base class, but that goes without saying. An amazing offering – 5 stars + seal of approval.

You can get this amazing, inexpensive pdf here on OBS!