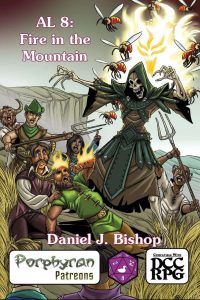 This adventure for DCC clocks in at 37 pages, 1 page front cover, ½ a page editorial/patreon-thanks, 2 pages of SRD, leaving us with 33.5 pages of content, so let’s take a look!

Okay, so first thing you should know: The pdf actually includes a new race, somewhat goat-like humanoids of fey origin that gain 1d8 hit points per level. They may use blackjack, blowgun, club, sling, spear and shortbow and staff sans penalty, but other weapons suffer from a -2 to attack rolls in addition to the -1d penalty. Attacks with hooves, claws etc. are not penalized. Urisk also balk at armor: Anything beyond a wooden shield nets a +1d increase in Fumble Dice and +2 to armor check penalty. Their horns inflict 1d6, their fists 1d5 and their hooves 1d4. Urisks may use an Action Die to make multiple attacks: Both horns, both fists or both hooves or any combination thereof, but the attacks are penalized at -1d. The urisk also may make three attacks, one of each type, but this comes at a -2 on the dice chain to hit. Pretty sure there should be a “d” after the 2.

When an urisk makes a successful attack with a natural weapon, he may add his Savage Die to damage rolls, or, in the case of a crit, to the critical hit table instead. Urisk get very slow access to a couple of spells, representing their skill in the old ways. The have movement 30’ and are not impeded by hilly or mountainous terrain, gain infravision 30’ and can eat anything – their rations only cost ¼th that of humans. They save against ingested poisons at +2d and versus fire with +1d. They also detract 1d3 damage from fire. Iron and steel exposure halves their healing rate. Action Die can be used for atk, skills and spells; Additional Action Dice only for movement. At 1st level, the urisk adds Luck modifier to one natural attack and one spell. The urisk come with a proper class table; atk mod scales up to +4; Savage Attack damage die increases from +1d3 to +1d8; crit die/table starts at 1d7/III and improves to 1d30/IV. Action Die increases from 1d20 to 1d20 + 1d20. Ref- and Will-save adhere to a ½ progression, with Fort scaling up to +4. They learn up to 10 spells, maximum spell level 2 (unlocked at 7th level). They also start with +4 Climb, scaling to +14 at 10th level. Level titles for lawful, neutral and chaotic urisk characters are provided from level 1 to 5.

This being an adventure review, from here on out, the SPOILERS reign! Potential players should jump to the conclusion!

All righty, only judges around? Great!

All right, so this is a funnel set if Purple Duck Games’ patchwork planet of Porphyra, wherein players players may play urisk mountain-dwellers or characters willing to help one. A nice introductory text introduces the conundrum: Billy Cloven-Foot, an urisk, has found a cave with some strangely modern looking bits…he tinkered with a door and opened it…and now, those spirits freed need to be laid to rest. The module presents some encounters for trekking up the mountains and information for PCs interrogating Billy. En route, the PCs may run afoul of faerie foo lights, fire bees…and reaching the dungeon, the PCs will find the remnants of charred bones and soon encounter multi-eyed, upright walking capering goat things that spontaneously combust upon being slain. In true DCC manner, PCs should be smart – there is a chance to bring a whole cave don on their heads (probably lethal).

The PCs exploring the complex will soon realize that this is a place sanctified to the elemental lord Krakaal, foe of the NewGod Obikaal (Porphyra’s core divine conflict is between the elemental lords and the interloper NewGods); the complex sports an ice spider, a hive of the aforementioned fire bees and their magical wax. Worse, there are the Impenitent, once imprisoned, now free – they are the masterminds behind transforming Billy’s goats into these THINGS…so defeating these beings and their leader, the abbot, may help the region…but there is another problem: Know what’s within this dungeon, beyond cool terrain features? An access point to HELL. There is a wheel. Turning it leads to another place, another time…so if the PCs turn it, they basically turn the world and time AROUND that point – they may well see themselves, the shape of things to come, creatures far beyond their power…and they will realize that, ultimately, to move the access point away, at least one PC will have to remain…or, you know, all of them go that route. They may inadvertently end up FAR away from their humble homes – questing to return is certainly something the judge should consider! (Oh, and the impenitent may have had a LONG time to cause all kinds of havoc…

Either way, the module certainly doe s neat job at being a cool, introductory funnel.

Editing and formatting are good, I noticed no undue accumulation of hiccups. Layout adheres to Purple Duck games’ printer-friendly 1-column b/w-standard with purple highlights. The module sports nice full-color artworks and comes with detailed, nested bookmarks. Cartography is b/w and solid. There is no player-friendly version of the map to cut up and hand out, which is a bit of a pity as far as I’m concerned.

Daniel J. Bishop’s “Fire in the Mountain” is a great offering; it makes me swallow my own words. You see, at one point, I pretty loudly proclaimed that Porphyra’s aesthetics would run contrary to the tenets of DCC. Well, I’m not above admitting mistakes; turns out that all it takes is the right approach/author. This module takes the weirdness of Porphyra and emphasizes it in an interesting manner – the adventure feels distinctly Porphyran, but at the same time less like high fantasy and more like a strange land, unlike our own. This works very much to the adventure’s advantage and the potentially weighty decision that the players have to make in one room is glorious. As an aside, this also makes for great convention-gaming: I can see this work really well in a con time-slot. While I would have liked a player map and while this is not my favorite DCC-book Daniel J. Bishop penned for the ducks, it is a neat addition to the array of amazing supplements PDG has released for DCC. My final verdict will hence clock in at 5 stars.

You can get this cool funnel here on OBS!