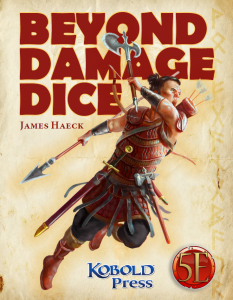 This supplement for 5e clocks in at 11 pages, 1 page front cover, 1 page editorial, 1 page SRD, 1 page advertisement, leaving us with 7 pages of content, so let’s take a look!

Of all components of any iteration of D&D, weapons are ultimately the most underdeveloped component, at least regarding the impact they have on gameplay. From different ACs versus different types of attacks in 2nd edition, to DR in PFRPG/3.X to 5e’s resistance/immunity-system, there have been many takes on the aspects; 5e does a lot right in my book, with its rock-paper-scissors approach to damage resistance and immunities, an approach that mirrors my own games in many ways; for example, attacking werewolves with anything that’s not silver is tantamount to suicide in my games. Similarly, materials and weaponry peculiarities allow you to create a sensible myth: E.g. making an attack against a skeleton with a piercing weapon only cause minimum damage, prior to DR/resistance etc, or by making some evil entities immune to anything but jade weaponry suddenly emphasizes completely different components of the game.

Anyways, while damage types in 5e do a great job in diversifying the needs for different tools, the basic weapon engine is pretty simplistic by design; just because you’re using a certain tool doesn’t necessarily provide other tactical options. Now, as all of you know, I very much enjoy a variety of tactical tricks. This book endeavors to provide just that, depending on the respective weapon employed.

When one of the tricks herein require a save, the DC is based on 8 + proficiency bonus + your choice of either Strength or Dexterity modifier. When using a weapon maneuver, unless otherwise noted, the effects of the weapon maneuver wholly replace the usual benefits of an attack: When wielding a greatsword, you can make an arcing slash. While this only inflicts 1d6 + Strength modifier slashing damage, you may use your one attack roll to target two creatures within reach. That is pretty cool! Even cooler would be the Grinding Halt feature – as a reaction to being forced to make a Strength save to avoid being moved, you roll 2d6 and add the rolled number to the Strength saving throw. If the effect doesn’t allow for a save, you decrease the amount you’re moved by 5 ft.

This ability is a good example to explain what this pdf does as a whole: It adds tactical options to the game, based on weapon categories, often in rather cinematic ways; on the plus side, I can literally see pretty much every maneuver described herein; the material is rather well-presented. At the same point, by system-immanent necessity, this represents a bit of a complication – if you are *happy* with how weapons work in combat, with attacking every round with the basic options, then this may not be for you; similarly, if you are a hardcore simulationalist, you may need some modification: In the case of the aforementioned greatsword example, I’d require that the rolled number exceeds the damage threshold of the material employed when trying to prevent the forced movement, for example, with higher levels adding perhaps Strength modifier to the check. Both paradigms would perhaps not be 100% content with this pdf; the focus of these weapon based maneuvers and tricks is that of a middle ground, resulting in combat that feels like “normal” fantasy – dynamic, but not necessarily gritty. I’d call this basically an action-movie-esque approach.

Do not let that necessarily dissuade you, though: Take longswords: I really like the ability to short draw them an attack with the pommel, potentially rendering the target off-balance for your next, proper attack. (This trick can btw. be used with most 1-handed weapons.) That being said, I am NOT a fan of the parrying mechanics employed herein: They are based on competing attack rolls, which, by definition, yields swingy results and takes time AND gives the player an idea of the attack capabilities of his foe. They also are an all or nothing response: If you win, you cause the attack to miss. Furthermore, the weapon master martial archetype has ALREADY established an elegant parry mechanic for 5e. Why not build on that and instead use this swingy all-or-nothing method? Really, really dislike the parrying.

On the plus-side, dual wielding rapier and dagger as main gauche lets you add a fluctuating bonus to AC. Battleaxes are utterly OP: You can use them to score crushing blows: These blows reduce the armor class gained by wearing armor or natural armor by 1. Problem 1) The feature does not state how to regain/repair natural armor. Problem 2) Put a dragon in the midst of a ton of fighters wielding axes. The creature will very soon have no armor left. Not getting anywhere near my game. At the very least, there should be a quick magical way to heal this for natural armor. Oh, and while you can’t wreck magic armor unless you have a magic axe, a finer differentiation among natural armors and magical armors would have been appreciated. RAW, even an uncommon weapon could start chipping away artifact-level armor.

On the plus-side, the tripping attacks of polearms are analogue to established tripping maneuvers; I also like that the different types of polearms presented (halberds and glaives) gain different tricks…though we have once again the sucky parry mechanic here. On the plus-side, using a halberd to move creatures back is nice. Pikes let you go phalanx and repel charges, while the quarterstaff helps vaulting.

Clubs can be used to blackjack targets, stunning them for 1 round on a failed save. That’s…potentially an infinite stunlock. The flail’s chain garrote feature hasn’t been bolded properly and is particularly good when used against shields. Greatclubs allow you to potentially hurl targets, with crits dealing bonus damage and breaking…bit of a word of caution: The classic club-wielding ogre with +2d8 bonus damage on a crit can make for a pretty reliable PC-kill, more reliable than even on a regular crit. Morningstars can temporarily negate Dex-mod to AC on a failed save – here, we have a Wisdom (Medicine)-based means to negate the effects, but weirdly, no ideas how magic interacts with this. I am also ambivalent on ribshatter – it’s a stunning attack that is based on damage versus the target’s Hit Dice – two values that don’t scale analogue in 5e and, in fact don’t have that much in common. (As an explanation, the damage must exceed the target’s maximum Hit Dice. Yes, you could RAW stun creatures that…well, don’t have ribs, bones, etc.). War picks can completely ignore armor and deal normal weapon damage. Remind me, why would I attack any other way, ever?

Whips are neat, though; Frighten foes on failed saves, drop weapons at the feet. Daggers allow you to pin targets to environments and may easily be concealed. Javelins are weird. When making an attack against a target at EXACTLY the maximum range, you can deal damage and cause the target to be frightened. Oddly circumstantial in comparison. Using nets to blind foes or reduce flying speed similarly should be considered to be cool. Speaking of cool: Using crossbows to pulverize objects in shrapnel is pretty damn cool. On the downside, composite bow shots that reduce the enemy’s speed to 0 ft. in addition to regular damage is brutal.

It should be noted that neither spears (unless you count the javelin as such), nor chain-based weaponry or the like is in the pdf; while I did not expect to see the whole WuXia array here, I was a bit baffled by the omission of spears.

Beyond the normal weaponry, we also have 7 new Midgardian weapons (excluding aforementioned composite bow) – dwarven tijino poleaxes are excellent at unmounting targets, nordmansch greataxes have, once more, the sucky parry mechanics and can damage weapons – one hit and the weapon attacks at disadvantage. Once more, we have the repair/healing of natural weapons issue. An estoc, a poniard, fang blades, hooks and the scorpion stiletto sport flavorful, well-written summaries – and sport similar design as the weapons mentioned…both regarding plusses and downsides.

Editing and formatting are good, apart from aesthetic hiccups like “Stiletto” instead of “Scorpion Stiletto”, I noticed nothing too grievous. Layout adheres to Kobold Press’ really nice two-column full-color standard and interior artwork is solid b/w. The pdf has bookmarks for weapon categories.

I really wanted to like James Haeck’s “Beyond Damage Dice.” This book is pretty much what I wanted; sure, I’d prefer a massive, exhaustive tome…but making weapon types matter is an amazing idea and one well worth executing. In some instances, the pdf manages to reach highlight of brilliance that made me smile from ear to ear. On the downside, there are several cases where mechanics needlessly deviate from established standards in 5e, and the balancing of the weaponry is wonky in several cases. From the issue of regaining AC-reductions/weaponry to the different power-levels of the weapon features to the needlessly swingy parades, the pdf feels less refined than what I’m accustomed to see from the kobolds.

As a whole, I do hope that this concept is refined and expanded in the future – it is my ardent believe that the cool gems herein and the concept can carry much, much more. As a reviewer, I need to take the blemishes into account, though – and I can’t see myself using this in its entirety, not without serious streamlining. Hence, in spite of the glimmers of brilliance, this ultimately is a mixed bag. My final verdict will reflect this and clock in at 3 stars.

While I can’t unanimously recommend this pdf, it’s part of a charity humble bundle alongside a ton of amazing books by Kobold Press and Frog God Games – you check that out here!