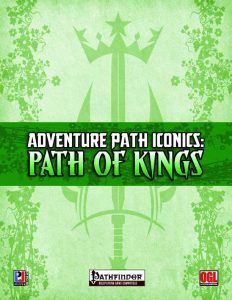 This installment of the Adventure Path Iconics-series clocks in at 19 pages, 1 page front cover, 1 page SRD, leaving us with 17 pages of content, so let’s take a look!

Now, first things first: The respective NPCs are made with a 20-pt.-buy option in mind, but we get scaling notes for both 15 and 25 pt. buy campaigns. However, no other notes for the generation process are provided – instead, we dive right into the respective pregens. The characters have all been created with the Kingmaker AP in mind, but may be used, obviously, just as well in other contexts.

Now, as a plus, each of the characters comes with notes for further advancement at higher levels. Annoyingly, spell-references there, if any, are incorrectly formatted – they are capitalized and not italicized in the advancement notes of the pdf, which is a pretty basic snafu. Plus-side: Special abilities are reprinted, if any. Each of the characters also comes with roleplaying notes as guidance for the players, a sample quote and a nice, full-color mugshot.

The first character herein would be Davor the Loresteeped, a half-orc wizard with a bonded object, who had a tough time growing up due to an absentee father. His mom did her best to raise him, though, and he did complete his apprenticeship. That’s pretty much the extent of the story here. Minor aesthetic complaint: There are two superfluous line-breaks in the AC-section – alas, not the only such glitch: The elven fighter Faunra has “CG alignment medium humanoid” in her header line; there usually is no “alignment” word here. This would also be a good moment to note that her atk-values for weapons in her statblock are absent; while it’s easy enough to discern them, it’s annoying. It should also be noted that she is carrying medium load for her Strength score, which is not reflected in her movement rate, an oversight that can be found with quite a few characters herein – it’s an uncommon choice and would be more player-friendly if it was noted somehow.

Beyond her, we get a human bard (Felix) and a dwarf barbarian (Gegig) – none of these characters come with archetypes or the like. In Gegig’s case, it’s a bit sad to see that no premade rage-modifications have been supplied as supplemental material. Gegig is also referred to incorrectly as “she” in the fast movement and rage sections.

The NeoExodus-specific races that make up the next 4 pregens, alas, fare no better: Gryn Ogyn, a prymidian ranger, is lacking CMB and CMD stats, and with Dex 16 and Improved Initiative, he should have initiative +7, not +5…and that is before the reactionary trait (which A LOT of characters herein have…without that choice making much sense). Rangi the half-giant paladin sports a similar glitch, and one of the traits and the background mentions Torag, which I’m pretty sure is an infringement on Paizo IP. He also lacks a couple of racial traits. There would also be a Sasori rogue and a p’tan cleric to complement the pregen array.

Conclusion:
Editing and formatting, alas, are not up to the standards we require, particularly for pregens. On a formal level, minor oversights and glitches can be excused, but as soon as they start to seriously compromise the rules, things become problematic. Layout adheres toa nice 2-column full-color standard and the pdf comes fully bookmarked for your convenience. We also get a second, more printer-friendly version.

I’m sorry to say this, but I cannot recommend Gabriel Jewell’s pregens for Kingmaker. The characters sport several really nasty hiccups in the statblocks, which is baffling, considering the relative simplicity of the builds – no archetypes, no uncommon choices. The background stories are also painfully vanilla as far as I’m concerned. Finally, the pdf had a real chance with Kingmaker’s subsystems: The pdf could have noted preferred roles later, etc. Nothing. This pdf is really rushed and rather unimpressive. Compared to Legendary Games’ pregens, I can’t really find a reason to get this. I am honestly sorry, but my final verdict will be 1.5 stars, rounded up due to the nice mugshot artworks. Content-wise, I couldn’t find anything nice to say.

You can get these flawed pregens here on OBS.