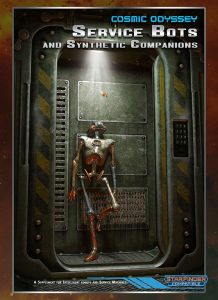 The second book in Fat Goblin Games‘ series of Starfinder-supplements in the Cosmic Odyssey-series clocks in at a massive 62 pages, 1 page front cover, 1 page editorial, 1 page ToC, 1 page SRD, 1 page advertisement, 1 page back cover and 1 page sample robot-sheet (Nice!), leaving us with a massive 55 pages of content, so let’s take a look!

Okay, we begin this massive tome with a nice introduction (which also specifies that the book uses gender-neutral pronouns for the service bots and synthetic companions within) and moves on from there to a list of influences on the design, which could be taken as a brief Appendix N-like section of sorts. In a rather surprising twist, we go pretty scifi-y, in that the pdf actually discusses nuances between artificial and autonomous intelligence, qualifying e.g. androids as the latter. A SB, or service-bot, is assumed to have an artificial personality, as roleplayed by the player, and they will not provide preset responses to threats etc. unless the like was specified by the owner; as such, one could argue that we do not have autonomous intelligence in this context. In analogues from Pathfinder, we’d treat them more akin to the automatons of tinkers than like e.g. eidolons or similar companions.

Now, SBs are constructs with the technological subtype and they consist of a power source, computer, frame, controller interface, propulsion and add-ons. SBs have a tier, which is calculated based on its computer, +1/2 tier per add-on. Service bots are assumed to be capable of surviving briefly in extreme environments: Without the respective add-ons, they have 1 minute of unimpeded functionality in zero-g, extreme heat, etc. – after that, it will take damage and after 5 minutes, it will cease operations. This does help with the old “zombie-defusing”-problem – send an expendable critter into danger. PCs can’t do that with service-bots. Service bots are assumed to be waterproof and vacuum-proof, but prolonged exposure/full immersion can fry them – the GM retains control over when this happens.

Ability scores and saves are optional for SBs – they are assumed to automatically fail a saving throw if these are not specified, and the same holds true for ability scores and related checks. They are assumed to have 10 in the ability scores, and 0 in saves, except for one, which is equal to the tier, most commonly Fortitude. SBs are assumed to have 0 ranks in skills, with the exception of one skill (optionally), where they have ranks equal to their tier. Provided a service bot has a skill or appropriate add-on, it can Aid Another. The total price of a SB is dead simple to calculate. You just add the costs of he components together – and example illustrates this rather neatly. Most SBs are Small or Medium, though Tiny and Large SBs exist as well, though uncommon sizes adds +1 to tier per size and doubles power consumption of the frame. SBs with a bulk of 25 or more requires propulsion. The frame determines appendages, add-on slots, etc. Their durability may be upgraded at increased costs and tier. Appendages also determine the number of operators that can use a service-bot. Similarly, more advanced controller interfaces may be purchased, but cost credits and require an add-on slot as well as 1 OU to power. A massive 1 page table of frames provides a lot of different basics to choose from.

Now, I mentioned propulsion – once more, we have quite a few cool options here – these are btw. tied to the number of appendages the Sb has; for example wheels require none, but if you want a SB with arm propellers (!!), you’ll need at least 6. SBs have 5 times tier hit points and 2 + tier hardness unless otherwise upgraded, and they may be broken relatively easily. Now, PS and OU (power Source and Output Units) also provide a variety of different options and, in a really cool twist, you can split OUs and e.g. only have certain functions powered at a given time. You still have to meet the minimum requirements to power the SB, obviously, but yeah. Really cool and considerate! Oh, and if you think about jamming a starship power source into a SB – bad idea. But yeah, the book even covers that.

SBs are usually programmed to never harm another being, so combat utility, in case the stats didn’t make that abundantly clear, is limited. If they take more than ¼ of their hit points in damage, they may incur serious damage. Want to ride a service bot? Well, turns out, you can! A SB can integrate into the mechanic’s class feature as either drone or exocortex. In the case of drones, simply add a free add-on slot as a place t slot each drone mod, and the SB takes on base drone statistics and chassis. For the exocortex, you remotely and telepathically control the SB by loading the exocortex into it. Done. See, I really wanted to see this, and, much like the detailed care that went into previous options, this covered it.

And this concludes the section on DIY-service bot creation. It stands out as an excellent example of what I expect to see in Starfinder: Concise rules, presented in an easy to grasp manner, which tie in seamlessly with those in the Core Rulebook. Beyond that, they show awareness and consideration for an impressive assortment of individual choices and needs. The section is empowering in its creativity and I dare say that pretty much everyone will come out of this with at least one cool idea, probably a whole plethora! We all wanted a service-bot beer-barrel that you can ride, with arm propellers. Right? Right! This section really, really excited me – but it is nowhere near to where the pdf stops.

Instead, we get 5 different service bot manufacturers – and these corporation write-ups don’t just stop with brief write-ups; instead, each manufacturer has a bonus and a drawback: Friendly Face Sbs get +1/2 Diplomacy per ties, but have a 5% chance their holoskin DC is 0 when a creature attempts to disbelieve it, to give you an example. In addition to these rules-relevant and fluffy components, we actually get corporate slogans (!) and even notes on legality, copyrights and trademarks (!!). Heck,w e even get corporate logos (!!!) and notes on DIY SBs! Yes, at this point, I am officially impressed. Beyond these aspects, we get a smattering of rumors, which may work as adventure hooks pertaining service bots etc.

Now, I know, I know. Why do these bots exist? Because sentient life is programmed to conserve energy, to make life easier, nicer. As such, it is only fitting that a HUGE chunk of this book is devoted to making life easier for GM and players alike: We get a COLOSSAL amount of pre-made sample SBs. As in: 100 of them. They are organized first by tier, then alphabetically within the tiers. They sport prices and denote manufacturer etc. as well as brief write-ups. Cleanybots! Petsybots! Lifters! Snake-shaped SB-storage units! An inefficient, bouncing SB-model called pogo, a favorite of kids! Emergency-loss-of-atmosphere bots! Movement detectors! A MMO-bot! Search-and-rescue units! An automated magician’s assistant! Do you play in a pan-galactic death metal band, one whose sounds can’t be handled by regular SBs? SounderBot has you covered with its extra foam dampening! Do you hate cooking? A CookerBot can provide gourmet food without the hassle of having to cook. Like cooking and need an aide, but you have a temperament that lest Gordon Ramsey look mellow? We have a bot for that!

…Can we please develop SBs in real life RIGHT NOW? I so want ALL of them.

Editing and formatting are top-notch. I noticed no formal hiccups and in the SB-stats I dissected, no issues either. Kudos! Layout adheres to a really nice two-column full-color standard and the pdf sports a lot of rather cute full-color artworks I haven’t seen before, some of which quote the aesthetics of e.g. Wall-E. The pdf comes with bookmarks, but only per tier, not for individual service-bots, which remains pretty much the only organizational complaint I can field against this book.

Wow. I mean…wow. Kiel Howell’s service bots and synthetic companions are pure amazing. They make sense on so many levels, it’s not even funny. It makes absolute sense for a sufficiently advanced civilization to have a ton of these little helpers, so this aspect does add quite a bit to the credibility of a setting into which they’re introduced. From a game-perspective, they are challenging: They have to provide a tangible benefit and warrant resource-expenditure and a player’s investment; sure, it’s fun to roleplay the service-bot buddy, but if it’s useless, why bother? The pdf solves this tight-rope act admirably. Service bots do matter, but they will never be able to steal the thunder of PCs and their allies, while at the same time being potentially a) funny and b) life-savers…or c) integral parts of plots. The attention to detail regarding a lot of the finer interactions and things you may want to do with SBs and the seamless integration into Starfinder’s rules-chassis left me positively blown away and surprised. This is the best book by Mr. Howell I’ve read so far and should be considered to be must-reading for any Starfinder group that wanted a cool robo-sidekick: Whether C3PO, R2D2, Marvin…or, well, a heli-beer-dispenser-roadie, this book has you covered. I adore this tome and the vast amount of sample SBs make this super-convenient for the GM as well. All in all, an excellent, highly recommended file, well worth 5 stars + seal of approval. Get this asap!

You can get this inspiring, amazing book here on OBS!