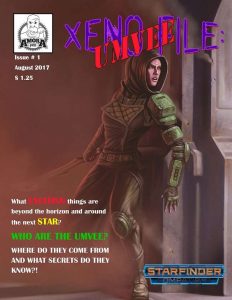 The first of Amora Game’s Xeno Files-supplements clocks in at 8 pages, 1 page front cover, 1 page editorial, 1 page SRD, leaving us with 5 pages of content, so let’s take a look!

This whole series was requested to be moved up in my reviewing queue by my patreons.

All right, so the Umvee hail from a planet that has slipped dimensions in an event called “kitsune shift”; the race sports pale white to light pink skin and females are typically taller; they are defined by a rigid caste system, knowing 4 castes: Alpha, Beta, Omega and Zeta. Umvee get +2 Con and Int, -2 Cha, are Medium humanoids with the kemonomimi subtype and get 4 HP. They receive limited telepathy and get a +2 racial bonus to Survival skill checks. They reject cybernetics, locking them out of these, but may gain personal upgrades like mystical crystals, nanite enhancements and symbiotes. (Minor plural glitch in the pdf here.)

As a twist, the aforementioned, archaic caste-system is enforced by genetic engineering that is reflected in the base racial stats: Alphas get a +1 racial bonus to damage rolls with melee attacks versus KAC as well as 1 Stamina per level – I assume that these are in addition to those granted by the class; while it is obvious that that’s the intent, an “additional” would have been nice here. Betas may choose Skill Focus for Bluff, Diplomacy or Sense Motive. Omegas get +2 to Mysticism and +2 to CL checks – a racial bonus, mind you, which means this stacks with Spell penetration etc. Zetas gain a +2 racial bonus to saves versus curses, diseases, drugs and poisons. This is stronger than in PFRPG, considering the increased potency of afflictions in SFRPG.

Each of the castes has a different approach to body art, and we get an age/height/Weight table as well as notes on the umvee home world: Basically, from a backdrop of a once kinda-Asian culture, where humans forgot the natural world, an awakened kami named Daji rose and changed the kemonomimi, propelling their relatively primitive culture to the starfaring age, including the gift of limited telepathy. It is this living goddess of the race that is responsible for the matriarchal systems in their society, as well as for helping the race avoid some pitfalls of starfaring races. Sects, including basically Luddites (known as Shufei) can be found and the consequence of having a living goddess guide the race obviously also influences their philosophy. Within the castes, we have subtribes, which can account for a surprisingly non-monolithic diversity within the race. The pdf also provides notes on sample nomenclature and the race employs a variant of the Drift engine – the Shift Drive, which is ostensibly powered by their living deity.

A total of 6 adventure hooks and a brief write-up of the umvee home world Amorian is provided as well, the latter coming with two brief city/city-state write-ups and a proper planetary profile.

Editing and formatting are pretty good, I noticed no glaring formal hiccups and the rules-language provided is tight. Layout adheres to a nice two-column full-color standard and the artworks for umvee and planet are nice, particularly at this low price. The pdf comes without bookmarks, but needs none at this length.

Greg LaRose’s umvee are an interesting race: They are presented in a slightly modular, but unpretentious manner. Power-level-wise, they should provide no problems and their origin is interesting: The blend of kemonomimi origin and genetic engineering + living goddess is also intriguing: As the sole force to propel the race to the stars, she could make for all sorts of really strange issues arise as both ally and antagonist. The race can make for great allies and villains: Living goddess + genetic engineering-based society rings as supremely creepy, as far as I’m concerned, at least. Anyways, the umvee are worth checking out for the low and more than fair price point. My final verdict will clock in at 4 stars.

You can get this inexpensive race here on OBS!