Advanced Adventures: The Chasm of the Damned (OSR)

Advanced Adventures: The Chasm of the Damned (OSR) 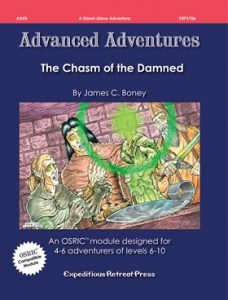 This installment of the Advanced Adventures-series clocks in at 17 pages, 1 page front/back cover, 1 page editorial/ToC, 1 page advertisement, 1 page SRD, leaving us with 13 pages of content, so let’s take a look!

As always with this series, we use OSRIC-rules as the default old-school system, with minor formal deviations from standard formatting, encompassing bolded spells and magic items, for example. The supplemental material includes a properly codified hand of glory magic item, and the pdf comes with 4 different, rival adventure groups that can be inserted as wild-cards into the game, particularly if the PCs have too easy a time. These groups are presented with basic stats noting magic items and spells, but no detailed write-ups of individual equipment. The module features three new monsters: A gargoyle variant that can, in groups, cause maddening winds that prevent actions of those affected; there would downy, small flying mammals with bat-like wings, poison and the ability to strangle targets on excellent hits. Finally, there would be the faceless ones, whom I will discuss below. Cartography is b/w, does its job, and the module sports 7 maps. Player-friendly maps, alas, are not included.

The following discussion contains SPOILERS. Potential players should jump ahead to the conclusion.

So, this adventure is a sandbox of sorts – a unique one! The number of competing groups noted before can also be determined randomly by the GM, and arrival sequence is similarly a kind of aspect that can be simulated with the help of the adventure. The adventure is intended for a well-rounded group of levels 6 – 10, though it should be noted that “winning” the adventure is probably left up to the higher levels. 12 rumors surrounding the chasm are provided for your convenience. The eponymous chasm is a “wandering” canyon of sorts – it magically pops up once every 37 years, for exactly 108 hours, before it vanishes once more. Its depths hold wonders, lost adventurers and stranger things – and as per the angle, the GM can easily integrate the module into pretty much any surrounding area. The predictability of the phenomenon also means that the “rush” for the chasm is very much justified. You could, in theory, even postulate a kind of chasm-micro-economy.

As you can determine from this unique set-up, the harsh and hard time limit of the chasm’s appearance and subsequent disappearance means that the PCs will have to hustle throughout the adventure. This, more so than anything, may be a limiting factor for the PCs exploring the chasm – in order to brave the trip, the PCs will have to conserve their resources, and there are two complexes, including the final one, which are linked caverns. The last one contains the potent secret at the heart of the strange behavior of the chasm – one that only PCs closer to the higher power-level will be capable of resolving.

As such, no two expeditions into the chasm will truly be alike: Lower level PCs will probably be exploring/looting, but not get to the bottom of the mystery; “Clearing” the location, though, will be an extremely difficult challenge. Anyhow, the chasm includes a total of 7 different mini-dungeons (as noted, caverns 5 and 6, and 7 and 8, are linked) spread out over three levels, and wandering monsters are provided for the dungeons. These range in themes: There is a cavern that contains orcs, one that houses svirfneblin (which may be allies of sorts); there is a cavern highlighting the aforementioned bogwings and one that houses deadly basilisks, petrified adventurers…and a frog that serves as a unique kind of oracle! Yeah, there is some nice weirdness herein, which never feels wrong or out of place, courtesy of the unique background of the chasm.

The faceless ones I mentioned before represent a healthy dose of weirdness, featuring the aforementioned variant gargoyles, with a birthing vat providing the respawning critters, and a weird mural can have unpleasant repercussions. There also would be the Gray Sultan, one of the fabled bosses here: A F12, Hp 90 monstrous bastard of a unique killer, whose attacks may instantly strangle targets…he can be one of the high-level bosses within: similarly, the entrapped godling within, Ar’Q-Ess, well-concealed, makes for one truly deadly final adversary – but to even get to the godling, the PCs will have to get past deadly demons and similarly potent foes.

Editing and formatting, on a formal level, are very good, provided you get past the formatting deviations. On a prose level, the module sports unique and interesting, concisely-written prose. Layout adheres to a classic, two-column b/w-standard, including artworks. Down to the fonts employed, this is pretty classic. The cartography, as noted, is b/w and functional, though we do not get player-friendly maps. The pdf comes fully bookmarked for your convenience.

James C. Boney’s “Chasm of the Damned” is a delight in the premise and idea underlying the complex. There are quite a few clever components here – the unconventional oracle is delightful, and similarly, some of the adversaries rock. The blend of the weird and “normal” makes sense and the strange microcosm presented is cool. That being said, compared to previous adventures the author has penned, e.g. looting a statue that may animate is basically a guessing game – no chance regarding magic or the like to discern a means to bypass the animation.

This could be taken as symptomatic for the whole adventure: While the location and narrative angle are absolutely inspired, while the ideas featured for the respective mini-dungeons contained in the chasms are intriguing, the module does suffer from its page-count and brevity – in a way, the adventure is too ambitious for the scant few pages available. The chasm connecting the mini-dungeons, interactions between the locales, remain afterthoughts and somewhat sketch-like. The potential interaction between groups, the potential, unique economy of the chasm, could have provided a thoroughly distinct, fun environment – one that the adventure, per se, does not manage to realize fully.

Don’t get me wrong. This module is still a very fun and distinct adventure that has plenty of replay-value; suffice to say, the module can be scavenged easily – you could hack this apart without any problems. At the same time, this could have been a true masterpiece with a couple more pages to develop the ideas. I found myself wishing that we’d got more weirdness for e.g. the Iron Sultan’s complex, for the faceless ones, etc. – the compressed nature of the presentation of these dungeon-vignettes acts as a major downside regarding the level of detail and imaginative depths the author can provide. In short: “Chasm of the Damned” is a good module; depending on what you’re looking for, a very good module, even; but it did have the chance to be something special and doesn’t realize this chance. I found myself wishing that this had received the page-count of the atrocious “Prison of Menptah” instead – with 32 pages, this could have been a masterpiece.

Oh well, as provided, this is certainly worth getting. My final verdict will hence clock in at 4 stars.