It has happened – the Occult Secrets of the Underworld are finally revealed! 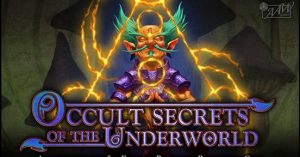 When AAW Games released Underworld Races & Classes, the Kickstarter narrowly missed the stretchgoal to make this book…but Jonathan G. Nelson listened to the fans, and commissioned this book, which, for me, is a passion project.

Why? Well, I was brought on board regarding the Underworld Races & Classes project relatively late…and this time around, I had full creative control; Jonathan allowed me full reign to unleash my imagination.The ideas, once I started designing, kept flowing…and like a good freelancer, I delivered what was promised, on time.

Here’s the thing…I fell in love with my own designs and really wanted to do more…and at this point, I figured I’d just go ahead and design what I’d love to see, what I’d deliver, unfettered by anything like page count. I wrote this version for myself…and I showed it to Jonathan. He was stoked.

That is how this project became the massive supplement it is now – over 60 pages of crunch, created from the ground up for 5e and PFRPG, far more coolness than was initially envisioned!

Yes, designed from the ground up. The two books have the same *ideas* and *concepts*, but they have been designed individually. There is no conversion here; from warlocks and distinctly 5e-centric rules to Pathfinder options, using, obviously, Occult Adventures, and ones that retain compatibility with some of the finest books the 3pp-circuit has to offer, the two versions are truly unique books.

Why “occult”? When Occult Adventures for PFRPG was released, it represented a paradigm-shift for the game; instead of new combinations of previously released material and narrow focuses that escalated the math, Occult Adventures focused on emphasizing player agenda and hardcoded unobtrusive flavor back into the options. This flavor could be easily reskinned or ignored, but it provided a first hook for the players and GMs to work with. This book tries to adhere to a similar design paradigm, and this extends to 5e. There is no standard, bland option within, no variant – each option is designed to be unique.

And yes, for those so inclined, the class options also all have underlying philosophical questions and themes that can enhance your roleplaying experience!

Emphasis on ROLEplaiyng – while the crunch is rock solid, I really wanted to make sure that this book is more than just rules – that it inspires GMs and players alike.

Beyond that, the books feature the best artworks I’ve seen Mates Laurentiu produce – just check out the kickstarter!

(As an aside – you can also get the limited edition hardcovers of Underworld Races & Classes for a great price!)

Oh, and guess what? Editing, layout, writing, art – this is completely done and ready to go! I have the print proofs right with me, and final edits are done as well. The book, literally, is finished and ready to go!

Anyways, thank you for checking out my work!