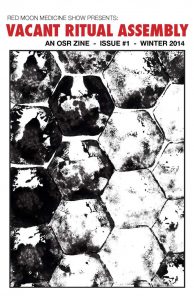 The first installment of this OSR-zine for LotFP clocks in at 24 pages, 1 page front cover, 2 pages of introduction/editorial/recommended reading/watching, 1 page advertisement/back cover, leaving us with 20 pages of content, laid out for pamphlet-size (A5, 6’’ by 9’’).

The reviews of this series of ‘zines were requested by one of my patreons.

The first thing you’ll notice past the introduction is a black background, with white letters – this stark contrast ties in well with a visual element depicting a white, smeared ankh, which also is an indicator that there is an entry to the mythical ghoul market nearby, a means to access this strange hub of dark transactions, where players may not only purchase magic items, but do so by permanently lowering their ability scores – the concept noted here is “essence”, and while the pdf comments that it’s a good way to get rid of excess Charisma for power, for example, though, if your game is like mine, that may be a bad idea. The article also sports a sample stat-array for ghouls and mentions a couple of interesting pets/beings to purchase, including wind whales and ego raptors, which come with prices noted properly in silver coins, but without any mechanics to accompany e.g. the nice idea of ostrich-like egoraptors, which can “fly in short bursts. Faster than a horse.” Okay, specify. Alas, the pdf does not do that.

Nice here: The place also sports dirgists, four-armed bards that play dissonant bagpipes of ghoul bones, offering services as fortune tellers. Salves also may be purchased, and the write-up also notes fairy amber, which can be attached to items to render it magic, stacking with itself, though every subsequent addition has a chance to render the item nonmagical. This…can be kind of problematic for LotFP’s more story-driven aesthetics, rewarding lucky players with a bonus-extent that is not necessarily assumed by the math underlying the system.

Anyways, one of the coolest aspects here would be the skinsmith, a corpulent cyclopean demon that can be found here. This entity gets its own article, which no longer sports the black background. The demon hearkens to Diablo’s butcher in a way, but actually offers some services that include reviving the dead, adding replacement/additional limbs, etc. The additional limb aspect could have used a bit of clarification – does an additional arm provide an additional weapon wielding capability, for example? If so, there would have been nice ways to balance that advantage via LotFPs rules, but we don’t get this. More crunchy would be that the demon’s services to revive the dead may come with a list of 12 sample mutations/grim alterations. Cool and elegant (and studded with proper rules), the being can also carve magical tattoos, which allow for the 1/day casting of a spell as if it were regularly prepared; it may also be cast 2/day, but the second time is burns the user for minor damage and loses its potency. Only magic-user spells qualify – thankfully! Anyways, I like this, though I do believe there should be a stated limit on the amount of such tattoos a given character can have. His final service would be the preparation of artisanal cadavers.

The next article depicts Vespero, the antiquarian, who receives a surprisingly amazing b/W-full-page artwork. This fellow is basically a magic item peddler bearing the accoutrements of a plague doctor, which is pretty damn cool imagery. He also comes with a handy GM-work-sheet to track stock, and his presence interacts with how settlements behave regarding purchasing opportunities – no complaints here, I really enjoyed this fellow. While we don’t get stats for the vendor, considering his role, I’m good with that.

We once more return to the black background with a white text, with a one-page article depicting Luminari, Lady of the Golden Lamp, a deity that resembles a firefly with human arms; lamp maidens follow the bidding of the being, and it is said, she can guide you into the dark recesses of the forest. This brief article comes with stats for a being that may be a servant of the entity itself…and it is creative, sports great use of evocative prose and is really fun to read. I can see her, coming down to drink the fire… Really potent stuff.

Next up is a brief low-level adventure, “Brahnwick is dead”, which takes place in the fully mapped thorp of Sylvan Lake. Huge kudos: We get a player-friendly map here!! That is a big plus, so you actually *can* print out one map. Heck, the houses of interest similarly are fully mapped, going beyond what I expected to find here (though here, we don’t get a key-less, player-friendly iteration). The module is basically a mini-sandbox that takes place in a village in the throes of madness, where looting goes on a damn has burst. It is a nice, free-form setpiece that is easy to integrate without much fuss. It didn’t blow me away, but the maps mean that it’s easy to quickly prepare and spontaneously run.

The next 4 pages sport a fantastic artwork on one page and use the remainder of the space t conduct an interview with Chris McDowall, creator of the “Into the Odd”-game (review forthcoming). The final article is a DIY manor – it’s fully mapped with a keyed, but no key-less version, and sports a worksheet that you can quickly fill out. Handy!

Editing and formatting are pretty good, I noticed no glaring formal issues, though the rules-language components for some of the evocative concepts could have been tighter. Layout is definitely remarkable. This magazine looks surprisingly professional and the artworks and impressive maps make this one of the best-looking ‘zines I’ve read so far. That being said, I had issues printing this with 3 different printers, until I finally caved and reviewed it basically from the pdf. That was a bit of a bummer. Speaking of which, the pdf, alas, sports no bookmarks, which is a comfort detriment.

Clint Krause’s first VRA-installment is a pleasant surprise, as far as I’m concerned. It is a very stylish, neat little installment that sports quite a few fantastic, dark fantasy/horror-ish elements that are pretty evocative. The prose, as a whole, must be considered to be an impressive feat, though I couldn’t help but feel that a slightly tighter focus would have benefited the pdf. I wanted to see more on that butchering demon, more on the ghoul market, more on luminary… you get the idea. I do enjoy that this is unpretentious and irreverent in that it suggests stuff to hack and references other books, mirroring the DIY-aspect of OSR-gaming sans compromising presentation-quality. As a whole, I consider this to be a success, and the installment is available for PWYW. And know what? This is very much worth leaving a tip for. While it’s somewhat brief, it’s worth taking a look at if you enjoy dark and weird fantasy. It’s not necessarily a milestone, but even if you dislike all of the content, I wager you’ll still appreciate the surprisingly nice cartography. All in all, I consider this to be worth checking out, and taking PWYW into account, I consider this to be well worth a final verdict of 4 stars.

You can get this nice dark fantasy ‘zine here for PWYW on OBS!