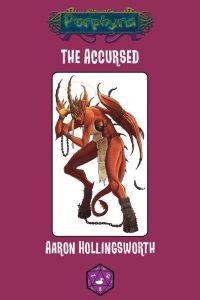 This base class clocks in at 17 pages, 1 page front cover, 1 page editorial, 2 pages of SRD, leaving us with 13 pages of content. These pages are laid out in 6’’ by 9’’ for digest-size, allowing you to fit up to 4 pages on a given sheet of paper if your eye-sight’s good enough. This review is based on V.2 of the class.

The accursed class gains d8 HD, 4 + Int skills per level, proficiency with simple weapons (and no shields/armor), ¾ BAB-progression and good Fort- and Will-saves. They add Charisma bonus to AC and CMD while unarmored and also gain +1 o AC and CMD at 4th level, + 1 for every 4 levels thereafter. These bonuses even apply while the accursed is flat-footed and applies to touch AC and even while the character is helpless.

The accursed gains a 0-level SP, usable at-will at 1st level, as well as a 1st-level SP, usable 3/day. At 2nd level and every additional level thereafter, the accursed gains another SP, with twice the accursed’s class level being the limit of SPs. 0-level SPs may be used at-will; 1st – 3rd level spells can be used 3/day, 4th – 6th level spells may be used 2/day and higher level SPs only 1/day. A given spell may be chosen up to thrice; each time, you add the same uses per day to it. The accursed uses his class level as caster level for these and they are governed by Charisma.The revised edition now sports a caveat versus costly SP-abuse – 5 gp is the maximum value a material component may have of a chosen SP. Which spell-list is used? That depends on the mark of the accursed – more on that later.

As a standard action that does not provoke attacks of opportunity, the accursed may use touch of ruin – this touch attack may not be used in conjunction with other touch-based attack-forms, can be used as part of a full attack (and multiple times, should you choose), and begins at 1d4 piercing, slashing and bludgeoning damage – here, a choice and action-based switch would have been significantly more elegant regarding ability-interactions. The damage inflicted scales up to 2d8 at 20th level. These touch attacks may delivered, atk-wise, via Dex instead of Str, if desired. Touch of ruin crits on a natural 20, with x2 multiplier, and when used against objects, ignores up to ½ class levels of hardness. The accursed may channel touch of ruin through melee attacks, but loses the Charisma bonus damage and the effects of ruinations when doing so. On crits, the touch of ruin’s bonus damage is doubled, regardless of critical multipliers of weaponry etc. This ability, in short, means that the accursed can hit pretty hard from the get-go. Touch of ruin may be used as a 10 ft. ranged touch attack instead, adding +5 ft. range per every 3 accursed class levels attained.

This touch also leaves behind an arcane mark analogue – which, somewhat lame, only persists until the damage is healed. At 2nd level and every even level thereafter, the accursed gets to choose a ruination. These are modifications of the touch of ruin that add further effects, mostly conditions, with a save of 10 + ½ class level + Cha-mod to calculate the saving throw DC. Only one ruination that inflicts a negative condition can be used per touch of ruin.

The ruinations have been completely overhauled. In the original iteration, they were a broken mess. In the revised version, we get bonus energy damage, with more potent energies locked behind minimum levels. So yeah, huge step up. Annoying: Many use a nonsense per-combat mechanic. *Insert here my rant on how per-combat mechanics make no sense in the logic of the game world.* Yes, they are functional, but still. Why not just use a time—based cooldown? The ruination that nets you a skeleton for those slain is perhaps the most interesting of these. Still, as a whole, a huge step up.

Also at first level, the accursed gains meant to endure, +1 luck bonus to all saves while unarmored, increasing by +1 at 5th level and every 5 levels thereafter. 9th level yields immunity to being targeted with divination spells and effects – and in the revised version, the accursed can actually activate or deactivate the ability, thankfully. At 19th level, the accursed is no longer considered to be part of her race for the purpose of spells, effects, etc.and loses the negative ability score modifiers of a race, if any. The capstone yields at-will bestow curse as an SP. Additionally, the class becomes immune to ability damage, drain and all curse-spells…which is WEIRD.

Now, as hinted at, 1st level requires the most important choice of the class, namely the mark – these marks govern the spell-list used by the afflicted to determine SPs available and provide abilities at 3rd, 7th, 13th and 17th damage. Here, we can find, for example condition immunities and touch abilities. Take the afflicted: These fellows get a touch of ruin-upgrade that inflicts 4 points of Con damage, now thankfully with a save and more daily uses. In contrast to the original, ability-interaction now works. The mark in question allows for the carrying of diseases, provides condition immunities to fatigued and exhausted at 13th level and proceeds to net poison and swarm damage immunity. Sin-touched nets Wisdom-damage according to a similar paradigm and provides negative/positive damage resistance that scales up to immunity, etc. The mindscarred can cause Int-damage and gets scaling DR/magic (upgraded to magic and silver later) and gains finally true seeing – here, there’s a minor layout glitch: The italicization (i) wasn’t properly closed, remaining as a remnant. Spellburnt accursed gain energy resistances, limited quickened SPs and SR for hostile spells only. The witchmarked represents a deviation from this formula, instead providing claws that upgrade in damage, crit-mod, etc. Once more, a remnant (i) is there.

The pdf has archetypes: Guarded accursed exchange the curse powers of the marks with an animal companion, though the animal gains +2 Wis, -2 Cha (min 1), +2 to saves at 7th level, Improved Natural Attack at 13th and immunity to mind-affecting effects at 17th level Yeah…that’s pretty much better than the mark abilities. Problem: Guess who doesn’t have Handle Animal as a class skill to train animal companions? Bingo, the accursed. The archetype should grant that.

The Sealed are locked in their armor, which is an AMAZING idea. While the archetype could do more with it, the revised version actually makes it work, so kudos. Yes, you can sleep in it. There is a “one/once”-typo, but that’s cosmetic.

The supplemental feats alas, still sport the strange seesawing tendency: 1/day, you can render a target staggered via Intimidate – PERMANENTLY. Sure, Will-save to negate, but I have no idea what the save DC/governing attribute is. It can also be upgraded to 3-day paralysis and even death, but none of these uses has been properly codified regarding effect types. DR/cold iron. A couple of sucky SPs and minor skill boosts can be found alongside minor speed increase while fleeing in fear (can become useless if you become immune…just sayin’)…and then there is the feat which lets you choose from lists other than your mark’s, which is vastly stronger than the above. Formatting has improved, though, and a 1/day evade death trick that makes you a very convincing “corpse” at -1 HP is an interesting continuation of the survivor-angle.

The pdf concludes with a massive favored class option benefit array that sports some decent, if repetitive options for a wide variety of races – big plus: The benefits have the races to which they apply in brackets – much better than an endless list with repeating entries. Sure, individual entries would have been nice, but yeah.

The pdf comes with a bonus-pdf containing the gorgeous Porphyrite Drake, penned by Mark Gedak and Perry Fehr – the critter clocks in at CR 11, can pass porphyrite borders, bypasses all DRs but DR/- and they can 3/day grant themselves speed-bursts. Oh, and know what? They are shredders in melee. And have a breath that teleports the subjected targets to locations of their choice. Oh yes. Dragon with portals. When played right, this critter is devious gold.

Editing and formatting have been significantly improved. While the original was almost non-functional, this one may have a couple of minor glitches and verbiage-deviations, but works as written. Layout adheres to a printer-friendly 1-column standard with nice full-color pieces. The pdf comes fully bookmarked for your convenience.

First of all: Huge props to Cascade Chain and Von Krieger. Their suggestions have obviously helped Aaron Hollingsworth’s accursed a great deal. As written, the class is now basically a very hard-hitting, yet pretty fragile guy who’ll get a lot of immunities, courtesy of the survivor-angle and vibe the class aims for. The concept of the class is strong and I very much like cursed fighters like the direlock, hellion, malefactor, malefex, etc. – the accursed fills the cursed witch/monk-niche and the ideas that can be glimpsed at in a couple of the fluffy components, are promising. The execution of the idea, while now significantly better than before, could have been more interesting, though. The class is very much melee/close combat-centric, but doesn’t really allow for good defenses or a sustained presence there. The mark and how it is conveyed via the touch of ruin, as well as the ruination-options, are, while now functional, not exactly breath-taking. They are the usual suspects, upgrade-wise, and don’t really offer for a truly distinct playing experience. Particularly in comparison with direlock and malefex, this feels like less than it could have been.

That being said, if you’re looking for an easy to grasp class in that vein, this may well be worth taking a look at. I’ve been sitting on the original version’s review for a while (it was a 1.5 star-debacle) and the revised edition has really improved the class; it is now playable. Internal balancing is much tighter, though the supplemental material like archetypes and feats still…well, is not exactly perfect.

So yeah, not a mindblowing class, but a vast improvement over its beginnings – kudos for the effort of making it work. My final verdict will clock in at 3 stars.