The Gobbler – A Thanksgiving Tale

The Gobbler – A Thanksgiving Tale 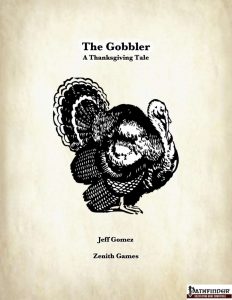 This module clocks in at 11 pages, 1 page front cover, 1 page editorial, 1 page SRD, leaving us with 8 pages of content, so let’s take a look!

Okay, so one of these pages is devoted to a new race, the awakened turkey, who receives +2 Con and Cha, -2 Int, is Small and a magical beast with the augmented animal subtype. Turkeys has a base speed of 20 ft. and are natural gliders, taking no damage from falls and allowing them to glide 60 ft. per 1 foot they fall. They also get +2 to natural AC due to feathers…but any fire damage cancels that bonus until the turkey is fully healed. These guys also get a 1d3 bite attack (damage-type not noted, requiring the player to default to standard), which is properly codified with regards to primary/secondary. Kudos. They also get +4 to Handle Animal checks and always treat it as a class skill. The bonus should probably be racial. They also get Toughness as a bonus feat. There is an issue, though: Awakened turkeys are delicious. Animals attacking them get a +2 morale bonus to atk and damage rolls with bite attacks, as well as a +2 morale bonus to grapple or pin them…or to swallow them whole. Cool!

Now, it should be noted that this adventure is intended for 3-5 characters level 2 – 4. As with the other Zenith Games mini-modules, we do not get read-aloud text, though sections of the pdf can qualify as such. It would have been nice to see them highlighted/shaded to set them apart, but oh well. Rules-relevant components are not explicitly highlighted in the text. The pdf sports a map, which is player-friendly, b/w and rudimentary, but completely sufficient to run this adventure – what I like to call “functional.”

All right, only GMs around? Great! The small town of Pilgrim’s Rest has basically the equivalent of Thanksgiving; Giblet farms and slaughterhouse is the institution in charge of providing the most succulent turkey for the celebration, but time after time, year after year, something goes wrong, costing the enterprise profits. Vandals wreck his enterprise. Thus, the PCs are hired by owner Gunther Giblet. The PCs, waiting for their appointment, bear witness to the aftermath of a verbal altercation with a lady before getting to talk to the Halfling – turns out, the lady has the name “Drumstick” and is, ironically, vegetarian and obviously the child of Gunther.

Drumstick would be a prime suspect, obviously, but Gunther dismisses any such claims, adding an off-hand remark about the Gobbler – he tells a sordid tale of a worker who fell into the machinery, being summarily executed by the machinery. Now, this may, depending on your type of campaign, be a bit of an anachronism, as industrial slaughterhouse were a product of a later age, so that may be something to bear in mind. (And yes, you can explain that away with clockwork or steampunk-y elements, but not every group will be happy with such a solution, so I figured I’d mention it.)

The PCs get a chance to take a look at the “farm” – basically a warehouse with cubbyholes and the machinery to slaughter the turkeys. Waiting here doesn’t yield much news, as the turkeys fall asleep: 11 PM, the door busts open to a warning of an elderly half-elven night-janitor, who tells the PCs that the previous years saw the slaughter of the predecessors of the PCs…and in a delightfully weird blending of tropes, he promises that the PCs will be visited by the Ghosts of Turkeys Past, Present and Future…and then, should they survive, the Gobbler will come to butcher them.

Things begin in a rather grisly manner once the old elf takes off, as a mighty turkey ooze forms from entrails and the waste components of the turkey; should the PCs prevail here, they’ll have to contend with deafening gobbling, as all cages burst open to have a swarm of turkeys assault them next. Once the swarm has been defeated, all cages are locked, the turkeys safe inside. Finally, a blinding flash of light will see a turkey knight, fighter and sorcerer manifest, pitting the PCs against basically futuristic sentient turkey adventurers. (Minor complaint: Spells not italicized.) Should the PCs emerge victorious once more, the gobbler will enter. Turns out, it’s Gunther. He has become afflicted with the curse of the dread wereturkey! Whether the PCs manage to subdue or kill him, the adventure ends with the defeat of the Halfling…though, yes, the PCs may actually be afflicted with the curse themselves…

Editing and formatting are generally pretty good, no truly grievous complaints there. Layout adheres to a no-frills two-column standard with brown-ish headers; the pdf is pretty printer-friendly. Artworks are public domain pieces in b/w and the map of the farm is,as noted, functional. Not aesthetically pleasing, but it does its job for the low asking price. The pdf does not sport any bookmarks, a minor comfort detriment, though, at this length, not one I’m going to penalize the pdf for.

Jeff Gomez’ Gobbler is a delightfully bonkers yarn. The module begins with a lead-in that makes you assume a heavy-handed morality fable, and it can be read as such; however, by quoting Christmas Carol and the increasingly surreal challenges, the pdf actually subverts this component, allowing the player/GM to draw his/her own conclusions. It is also this weirdness that makes the somewhat anachronistic components work in context, though a pretty far-developed larger city makes imho for a more sensible backdrop. As a whole, I ended up enjoying this adventure more than I thought I would. The matter of fact remains, though, that beyond being a sequence of combats, there is nothing going on here, and the terrain could have been more relevant to the proceedings as well. For the low asking price, this may well be worth checking out, though. My final verdict will clock in at 3.5 stars, though I feel I have to round down.

You can get this bonkers combat-sequence here on OBS!