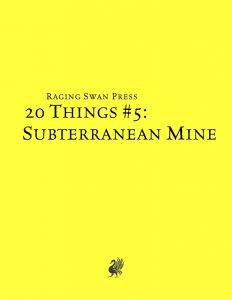 Mining is dangerous – much more so in a fantasy world and thus, we begin this entry of the 20-things series with 12, cool perils to be encountered while exploring mines -from boarded up holes in the floor to sticky webbing, impregnable darkness and wide, underground streams, the pdf sports an intriguing array of nice potential set-pieces and challenges…or just dressing, depending on your generosity as the GM.

While 20 things to find in an abandoned mine have originally premiered in GM’s Miscellany: 20 Things, the pdf does feature two tables that perfectly complement the array – 20 Hauntings and 20 Strange Discoveries: From skeletons with temperature drops to sounds of heavy footsteps to rat swarms that vanish, this pdf does feature several appropriately creepy happenings that combine well with 10 strange sounds. Now, as for the discoveries mentioned – these combine similarly well with the aforementioned, allowing for some nice storytelling: Thousands of rat skulls and aforementioned ghost swarm? Yep. Strange, deep sonic pulses or magnetic walls? This is the level of awesome I’ve come to expect from Raging Swan Press.

Now obviously, not all mines are abandoned and thus, non-abandoned mines come with their unique, less decrepit entries that also feature 12 things you can find on the bodies of miners….and finally, 20 things to be found within mining carts, hastily left behind, work for either type of mine.

Editing and formatting are top-notch, I noticed no significant glitches. Layout adheres to Raging Swan Press’ elegant two-column b/w-standard and the pdf comes fully bookmarked for your convenience. Additionally, the pdf comes in two versions, one optimized for the printer and one for screen-use – kudos for going the extra mile there!

Creighton Broadhurst, Ron Calbick, Kalyna Conrad and Jeff Gomez finally deliver a 20 Things-entry I can get behind fully; in spite of one table being released before, the sheer level of coolness of the tables/dressing featured herein make this installment well worth the fair asking price – universally, whether you own the big book or not. The ties between some table-entries are the icing on the cake and can inspire the GM beyond the dressing-component. Love it. 5 stars + seal of approval.

You can get these amazing dressings here on OBS!