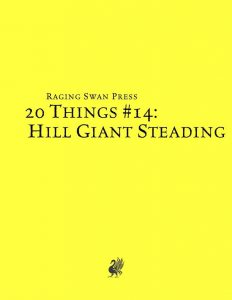 This installment of Raging Swan Press’ system-neutral #20-series clocks in at 12 pages, 1 page front cover, 2 pages of advertisement, 1 page editorial, 1 page SRD, 1 page back cover, leaving us with 5 pages of content, so let’s take a look!

We begin this pdf with 10 dynamic events for a given hill giant steading, created to evoke the illusion of a dungeon that’s alive – from orc slaves carrying bloody wolf pelts to the smoke of burning meat and strange impromptu games (tied to another table herein), the selection is nice.

But how do you know these deadly foes are near? Well 10 things you can discover nearby ought to give you a clue, provided you know that triangular accumulations of stones, topped by wyvern skulls, may be territory markers…and the classic, deep footprint may also be a tell-tale sign. And yep, that crucified, moldering corpse yonder? That once was an orc before the giants got their grimy hands on him…

Of course, giants, in the right circles, are known for their bags, which may contain a variety of miscellanea, both wondrous and vile in nature – hence, when you open such a bag, the proper page of this pdf may yield freshly killed sheep, half-emptied vinegary wine…or the heads of those slain. Special stones that break asunder for shrapnel-like attacks (unbeknown to the giant!) or giant-sized, spliced together ropes make for an interesting selection here.

But what about the steading? Well, we once again do receive specialized dungeon dressing, customized for hill giant abodes: And yes, the degenerate, stupid giants indeed highlight their characteristics in their abodes: Wood that rots, macabre trophies, soiled clothes and gigantic bronze gongs speak of the dilapidated and haphazard nature that characterizes their behavior towards others and the regions they inhabit.

In the context of this pdf, hill giants have an affinity for wolves as pets, (dire wolves in particular) and thus, 10 entries for wolf appearance dressing and 10 battle tactics/peculiarities can be found – after all, the hill giants won’t properly combat train them, so fear of fire, opportunistic pets and the like add a nice touch of strategy and character here. It should also be noted that standard read-aloud text for unmodified creatures is included here – nice!

The hill giants themselves receive pretty much the same treatment: 10 entries for appearance, including being a berserker (“A berserk” sounds a bit weird to my ears…) or grossly overweight, 10 battle tactics and 10 treasures and trinkets complement this mini-hill-giant generator.

Editing and formatting are top-notch, I noticed no significant glitches. Layout adheres to Raging Swan Press’ elegant two-column b/w-standard and the pdf comes fully bookmarked for your convenience. Additionally, the pdf comes in two versions, one optimized for the printer and one for screen-use – kudos for going the extra mile there! The pdf sports several pieces of nice b/w-artworks.

Creighton Broadhurst’s take on Hill Giant Steadings is a nice installment of the series and I welcome the dressing for the giants and wolves; however, at the same time, I do feel that the steading component could be slightly more pronounced: Only 3 of the entries actually pertain the environment, with the rest of the pages being devoted to creature and loot dressing. This is no bad, mind you, but it did leave me wanting a bit more regarding the steading itself. Considering the more than fair price-point, however, this still makes for a nice dressing-file to add to your giants – my final verdict will clock in at 4 stars.