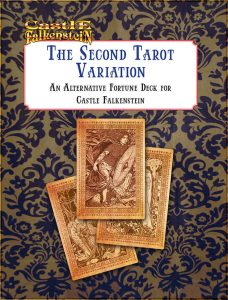 The second of Tarot-based alternate rules-pdfs for Castle Falkenstein clocks in at 6 pages, 1 page front cover, 1 page editorial, leaving us with 4 pages of content, so let’s take a look!

Wait, first, before we do: If you have not yet picked up the first Tarot Variation, please do so NOW. It has made my Top Ten RPG-product list for a reason – it is brilliant. The genius idea here is to use the Rider-Waite-Smythe tarot deck instead of the regular playing cards deck – the result has not only been an increase in atmosphere, but also a more interesting gameplay. I literally never want to play vanilla CF again.

Okay, that out of the way, to a degree, this pdf represents more of an amazing thing, we begin with establishing the connection between suites of playing card decks and tarot decks corresponding to another. The values for cards of the minor arcana are properly assigned their values. Since the deck contains one more face card per suit, but no jokers, the fortune deck includes 4 cads worth 15 points instead of 2.

The major arcana deck requires some choices to be made by the game’s respective host: First, are major arcana cards held in a player’s hand or apart. If they are held as regular cards, that decreases the number of minor arcana cards potentially held and as such, there is a balancing component there. If the major arcana is held on a separate hand, the plot-twisting elements of these cards become more potent, obviously.

The second decision would pertain how many cards the players can hold from the major arcana suite. If players hold these cards in their regular hand, the cards should be limited to a maximum of 1 or 2 held to maintain the option to keep succeeding at tasks via minor arcana. If a separate hand is chosen as the option to go for, the host can elect to cap the total at 3 or even 4 – the more of these a player can hold in a separate hand, though, the more volatile the game becomes, at least potentially – but that does fit well with Castle Falkenstein’s high-adventure aspect.

Thirdly, an easy means to balance the impact of the major arcana is the third choice -here, the host determines how many major arcana cards can influence one given Feat. As you may have noticed, this does assume a host at least familiar with the game and confident regarding the ability to interpret on the fly the respective results.

These basics out of the way, the rest of the pdf is devoted to listing the major arcana and their effects – these range from spectacular successes, to conversions into other cards, the option to exchange cards for one minute (nut not those drawn to power sorcery). Returning cards just played to the hand, increasing success levels…and drawing e.g. Justice can result in either fumbling or high successes of the Feat in question. Increased success-levels at the cost of injury and there is also an option to draw a card and increase an ability ranked Poor to Good for the action in question – in short, the proceedings become more volatile.

Editing and formatting are top-notch, I noticed no significant glitches. Layout adheres to a 2-column full-color standard that is beautiful and the pdf doesn’t sport artworks, but requires none at this length. Same goes for bookmarks – the pdf has none, but doesn’t require any at this length.

J Gray’s second tarot variation is amazing – while the novelty of the concept and enriched coolness obviously does not extend to the second of these, the matter of fact remains that this represents a glorious option that enhances the gameplay of Castle Falkenstein in much the same iconic manner as the original. All for a single buck. So yes, this is very much worth checking out – and a final verdict of 5 stars + seal of approval.