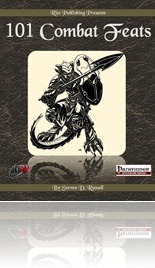 This pdf from Rite Publishingis 32 pages long, 1 page front cover, 1 page editorial, 2 pages advertisement and 1 page SRD, leaving 27 pages of content for the new feats, so let’s check them out!

After a 7-page list of the new feats, we jump into a selection of these new feats centered on ending your foes!

This latest feat-book by Rite Publishing provides us with a vast gamut of feats for martial characters that are focused on combat. In contrast to the extensive support the inquisitor got in Rite’s “Secrets of the Inquisitor” and “10 Inquisitor Feats” , the feats contained in this book are less class-centric, though that does not mean that their usability is limited. Instead, some of the feats herein use a variation of the mechanic introduced in the former pdf: Several of the feats enable you to impart negative conditions to your strikes. “Crush Visage”, for example, lets you make an attack at your highest attack bonus. If your foe fails at a save, he/she/it is dazed for 1 round. If the foe succeeds at the save, he is immune against the attack.

If “Crush” in the feat-name wasn’t enough of an indicator: The often neglected bludgeoning weapons-category gets a lot of love in this pdf, including the options to e.g. ricochet with thrown hammers and impart a neat variety of conditions via similar “Crush XYZ”-feats. Indeed, for fans of bludgeoning attacks and fans of Marvel’s Thor, this pdf might be a godsend, as a feat for just about every iconic attack is included.

Another minor focus of this pdf is the option to enhance defensive capabilities of characters, especially against e.g. charges: Whether it is feats that allow you to intercept charges, even if it is not your turn, but at the cost of an action in a subsequent round or one that enables you to set a brace against a charge as an immediate action, I did enjoy how spears etc. thus gain some additional support to help diversify weapon choices.

It should also be mentioned, that rangers, while not the central focus of this pdf, also get their share of useful feats like “Double Slice”, which enables you to attack with both as a standard action, but only 3 times per day. Double weapons also get some much-needed love and the option to suck less.

Aficionados of grappling should be aware that dislocating arms, diving tackles and similar moves also add some new tactical options to the roster. It should also be noted that dexterous combatants can get quite some bang out of this pdf as well, as some of the feats expand upon your weapon finesse capabilities and e.g. use it with double weapons.

The true stars, at least in my humble opinion, though, are this pdf’s high-level feats: Weapon mastery has always been an exceedingly LAME capstone ability in my book and this pdf somewhat alleviates this and remedies the fighter’s 20th level by providing a neat slew of exclusive feats for those who reached the apex of their respective craft: Whether it is dealing additional bleed damage with each attack or gaining a nice bonus-pool to distribute among the defensive abilities available.

Defense should also be mentioned: Shield-focused characters also get rather cool options, which among others, provide them the shield-bonus to ref-saves, enable them to use magical shields to reflect rays (a limited amount of times per day) and guard nearby allies as well.

Among the high-level, but not yet capstone feats, especially two deserve a mention, the first being “Destructive Power”. Now, while this is an 18th level-prerequisite feat, it offers a rather interesting mechanic: For a massive penalty of -14 to attack, you can, once per day hit a foe with an annihilating attack that deals 10 points of damage per point of your BAB in addition to weapon damage, upon a successful save, still a 10d6. At first, the raw amount of damage seems disconcerting, but the daily limit and massive penalty alleviate my balance-concerns here. In fact, I actually enjoy very much this risk/reward-ratio, as feats and design like this make for great climactic moments in battles. Generally, I’d love to see more such high risk/reward feats in the future.

The second feat I feel absolutely obliged to mention, then, would be one that is pure genius: “Outmatched Foe”. We’ve probably all been there. At high levels, spellcaster mow through low-level foes like no one’s business while fighters still have to grind down foes. This feat somewhat counters this tendency by offering an interesting mechanic: If you observe an act of a foe in combat and said foe is 7 levels below you, you can take a penalty of -10 to make all your attacks against said foe be considered confirmed critical hits and mow through those puny amateurs. Now if that does not make for cinematic disposals of low-level foes, especially if you’re like me and play with complex critical hits tables. Pure gold and awesome!

Editing and formatting are very good, though not perfect: The wording of e.g. Shieldlord could be a bit clearer. Layout adheres to a 2-column standard and the artworks are fitting stock as far as I could tell. The pdf comes with bookmarks. Continuing Rite Publishing’s trend of pushing the boundaries of feat-design and combining this mechanic trailblazing with a keen eye to find gaps in what can be done with feats and filling them. I wholly expected to be utterly bored by this pdf and instead, found this pdf an enjoyable read indeed. To be more precise, I really like how high-level combatants finally get an extensive selection of choices that serve to further make especially mid-to-high-level characters more distinctive and adding a versatile variety of specialization options. For fighter-player especially (and monks and similar combatants as well), this pdf finally provides some exclusive tools and advanced options that don’t suck and instead make sure that your attacks are useful beyond dealing just damage. I really enjoyed the pdf and consider some of the feats pure genius. Innovative feat design is also evident in some of them and while not all of the feats adhere to these new approaches/mechanics, the majority of them has a place in a campaign. If I had to nitpick about one thing, then it would be that I would have loved to see even more of these aforementioned “new” types of feat. My final verdict will thus be 5 stars – a must-buy for fighter-players and just about anyone who’s tired of high-level fighters feeling rather bland in comparison.

101 Combat Feats is available from: