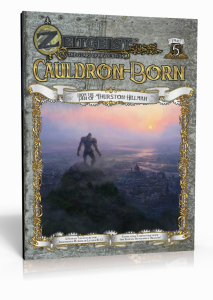 The latest installment of EN Publishing’s Zeitgeist-AP clocks in at 95 pages, 1 page front cover, 1 page editorial, 1 page ToC, 1 page SRD, 1 page back cover, leaving us with 90 pages of content, so let’s take a look, shall we?

It’s been too long since I took a look at one of the Zeitgeist-modules, but before I do, here the obligatory warning – this review contains SPOILERS. Potential players should jump to the conclusion.

No, really. Jump to the conclusion.

This adventure is the conclusion of the first act of the epic ZEITGEIST-saga, and as such, provides guidance of running it stand-alone (or the first campaign-act alone – just eliminate the conspiracy elements and there you go!) – which renders it longer than one would have expected. The constables of the RHC will have A LOT on their hands, so better hope they have honed their investigative skills.

A peace-summit is looming between the nation of Risur and Danor, finally bringing peace to the strained relations between the nations – including, btw., a list of the points of contention. In one sentence – there are a lot of elements invested in seeing the summit fail. Beyond a turf-war, a mad fey and radical eschatologists all have their own plots, which means that the constables will have to wrap up no less than THREE threads: In order to cope with this, magical long-range communication and the B-team are provided – the latter being only 4th level characters the players may play…and, of course, as always, characters may very well die.

And yes, on their way to meet the king, the PCs immediately are subject to a well-planned, rather deadly assassination attempt, including carriages, which should make clear the stakes are high – crimelord Lorcan Kell (backed by the two-letter-abbreviated conspirators) wishes to take them out. The king himself briefs them with the severity of the situation (as well as dropping some hints of ravenloftesque ties of rulers to their realm and citizens…) and tells them about the conspirators having some means of access to the Bleak Gate – something the PCs should better unearth as soon as possible.

Now the B-team will be busy with escorting the minotaur-ambassador Brakken – hopefulyl without attacking his dire-bear companion. Meanwhile, the PCs may see an old acquiantance from module #1 show up at the royal palace- the high elf Asrabey Varal asks, veiled, for assistance in hunting down aforementioned rogue fey. The B-team, escorting both the minotaur and the dwarven eye of Drakr at the summit will right NOW have their hands full -a deadly ballet of death is unleashed upon the city by a cadre of deadly dwarven eschatologists – perfectly timed bombs, sniper nests – the B-team will have its hands more than full trying to save what’s there to save! Alexander Grappa, the golem-maker, has his mind currently inside the head of a demolished bronze golem and may just be the additional piece of information the constables need regarding the Bleak gate – though a clever geas prevents him from divulging crucial information. Now as an additional mini-game, the PCs will have to generate and train a task force of people to take down Kell et al, which also provides various means for complications – essentially, they have to order a shadow war against Kell and his associates – in a damn fun, cool mini-game. Better – if the PCs have good relationships with the Cipiano, they may utilize Morgan Cipiano’s resources against Kell…for a price that will influence further adventures. Speaking of which – if the B-team can ensure that their outgunned fight in a night-club is successful, they can influence this mini-game as well – and actually get Kell’s lawyer!

Espionage and counter-espionage very much determine how well the final crackdown on Kell goes -if moles are not exposed, the PCs may find themselves at a significant disadvantage. Now the investigation into the renegade fey with Asrabey turns out to be rather interesting – the haughty elf still vastly outclasses the constables and thus, combats tend to have certain things for him to do – and yes, the fey-opposition of the Unseen Court is rather deadly. While the main group dukes it out with powerful spellcasters, the B-team will have “fun” calming superstitious folk and hopefully prevent multiple lynchings due to the fear of a curse. Capturing and interrogating a gremlin may see the PCs finally in a position where they can confront the fey-lord Ekossigan – in the process of a ritual sacrifice, clearly mad and mumbling about dread things hidden…but more on that later.

If the PCs have made friends with Kvarti in a previous encounter, the dwarf’s divergent take on eschatologist philosophy may provide a simple means for them to gain information – Kvarti is unhappy about the radical plan of mass-bombing the sub-railway system and wants to help prevent the unleashing of dangerous beasts bound for the harbor and a hostage situation planned by a particularly cold eschatologist – hopefully also diffusing the deadly bomb in a nail-biting finale.

The massive banquet scene that is to follow the happenings will be just as nail-biting and tense – there is a lot at stake and after the rather exquisitely detailed scene – which unmasks a particular NPC as a telepath and also provides the PCs with a means of maintaining an element of surprise over the obscurati in Cauldron Hill – depending on the means the PCs chose during the module, the finale’s assault on the Obscurati base will happen under vastly different constellations. Beyond infiltration, the utterly EPIC boss-fights that reward making allies and smart choices here deserve special mention.

But this is not the end – the titan of adamantine is unleashed upon the city, and while, for now, without direction, it needs to be dealt with – the king assembles a makeshift fleet (plus allies PCs may have made!) and tries to lure the titan to sea, while the king executes a powerful ritual aboard the vessel to banish the titan. The PCs will have to hold off the deadly, nigh-indestructible creature while dealing with the deadly witchoil horrors generating from the titan, for one of the most epic climaxes I’ve seen in any module.

Pages upon pages of handouts and GM-guidance to running this beast are provided as well.

Editing and formatting are top-notch, I noticed no significant glitches. Layout adheres to EN Publishing’s 2-column full-color standard with plenty of glorious, original pieces of art. The pdf comes layered to the extent where you can make it easily player-friendly. Cartography is glorious as well.

Thurston Hillman has done it. The fifth zeitgeist-module manages to live up to the utterly INSANE standard the first 4 modules set, all of which manages to score 5 stars + seal of approval, rendering this AP the only one among those I’ve reviewed that managed to maintain this level of quality. The ONLY reason I’m not playing this AP right now is that I’m waiting for it to finish – I never start APs that are not yet done. That being said, this module is glorious and the first ACT of this AP has more going on, more memorable moments, than many full APs I’ve read. Superb in writing and ambition, this killer module is simply brilliant and utterly captivating – my final verdict will clock in at 5 stars + seal of approval.

You can get this installment of the AP here on OBS for PFRPG.

Prefer 4th edition? (To each his own, I do not judge…) Here’s the link!