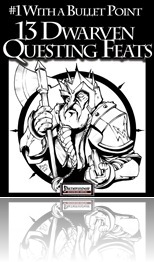 All right, you know the drill – from Super Genius Games, 4 pages, 1 page front cover, 1 page SRD, leaving us with 2 pages of content for the 13 new feats, so let’s take a look:

Editing and formatting are very good, but honestly, I felt that the writing was less crisp than I’m accustomed to by SGG. Layout adheres to SGG’s no-frills 3-column landscape-standard and the pdf has no bookmarks, but needs none at this length.

The feats herein are interesting, especially the interaction with racial traits being a route I very much enjoy. However, the questing focus is not that prevalent in my opinion. I enjoy the racial weaponry-feats, though they are not that creative and lack a crucial bit of information: They require weapon focus/specialization as a prerequisite, but don’t specify whether the feats stack with the prerequisites. The feat to cobble together treasure maps is awesome, but honestly, the others just didn’t blow me away. I’m used to better offerings by SGG and when compared with other pdfs, this one feels like it falls a bit short. While in no way bad, the BP is also not as polished or creative as usual and thus I’ll settle for a final verdict of 3 stars.

With a Bullet Point: 13 Dwarven Questing Feats is available from: