Way of the Wicked VII – Tales of Talingarde

Way of the Wicked VII – Tales of Talingarde 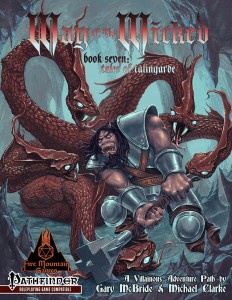 This is the bonus book for the critically-acclaimed Way of the Wicked AP – and yes, I am aware of the delay of the sequel AP and yes, I am a KS-backer of it, waiting for my print copies of both this book and Throne of Night, but that does not influence my review of this book.

So, what do we get? Well, first of all, we receive allcaps HANDOUTS. Massive arrays of papers, including a very important contract, now receive lavish, beautiful renditions – Michael Clarke is definitely a gifted graphic artist and the numerous mugshots for secondary characters for the AP (spanning multiple pages!) are downright gorgeous. Extremely helpful would also be the handouts of common knowledge about Talingarde, provided for the players and the excessively better-detailed introduction on how the PCs got caught and what they saw on the way to the predicament, with which the AP kicks off. Beyond those, advice on making key props can be considered welcome. Everyone’s favorite pet ogre NPC/cohort receives his fair share of love – with various, hilarious and well-written pieces of read-aloud text to be inserted throughout the campaign. This section can be considered pretty awesome indeed.

A gazetteer of the town of Aldencross, including an interesting creature the PCs may unleash upon the unsuspecting populace of the fully statted town and its inhabitants (including stats, again) and a certain naval-based journey in #1 also gets an optional, nasty encounter.

Thereafter begins the section of Minionquest – three interlude modules, wherein one may play the misadventures of the minions of the big bad PCs for a hopefully humorous change of pace. From here on reign the SPOILERS. Potential players should jump to the conclusion.

All right, still here? Minionquest I happens in Farholde, MQ II in Farholde and MQ III in the capital of Talingarde. And yes, the minions are sent on pretty brutal, suicidal quests for their merciless, dark masters. Oh, and yes, they get grumblejack assigned – who promptly tries to bully them into submission, steal their money, begin barfights – you know the deal. With no proper capabilities, taking on a fanatic street preacher and his acolyte may seem hard – just wait until they realize the guy is a werewolf. Yeah. They better be smart. Same goes for the follow-up quest of MQ I, where they are tasked to capture a hydra (the beauty on the cover!) alive – a task which Grumblejack btw. will happily push on the PCs alone.

MQ II can be considered an utterly hilarious scavenger hunt of liquors (provided in a handout with art!) for the hiding place of the Duke Daeveryn – from exploding alchemist’s shops to cheating goblinoids also in the race (of COURSE Grumblejack has a vested interest in the matter – and all the subtlety of a blood-coating, thundering sledgehammer…) for a magical sword, the second task is no less deadly than the first, but imho not as curvebally as the first. Still, a fun diversion from all things truly evil and important.

MQ III then deals with this one luxury manor that has not yet been pillaged…and oddly, no minions have returned from it. Strange, right? Well, turns out that a) the place is crawling with traps, b) haunted by the ghost of the place’s last owner and c) is patrolled by an old stone golem who receives commands from the ghost. Have I mentioned that minions have 3 levels of an NPC-class? Yes, these quests are deadly, and hilariously so.

Beyond that, further options are provided – take Eiramanthus’ library – well, now the kingdom of Talingarde (Asmodean edition) may go for advanced artillery, handguns, arcane theorie, clockwork soldiers – whatever your diabolical villains may research! Speaking of research – if technology isn’t to your liking, rules for establishing Talingarde’s first Wizard collegium and the research that can be done there (including the research of clockwork dragons!) should fit your tastes. If you were going for the vampiric version of WotW, the modified information for plunging Talingarde into eternal darkness, including builds for Adrastus and Sir Richard, all modified to reflect the change in emphasis.

Speaking of supplemental material – what if your PCs are as powerful and smart as mine? If they win the final battle? (Or are fanatics?) – Well, there is an alternate ending, wherein the PCs doom all of Talingarde, fusing it and everyone on it with the 9 hells. And yes, the massive ritual has an incredibly steep price to pay for in the final moments. Which one? I won’t spoil THAT for you, only that one of the maps in the book provides for a nice visual representation here as well.

Editing and formatting are top-notch, I noticed no significant glitches. Layout adheres to WotW’s beautiful full-color two-column standard and the pdf comes with copious artworks by the exceedingly talented Michale Clarke. The number of handouts and artworks provided herein make this book a massive increasing factor in the overall aesthetic department for all of WotW. The pdf comes fully bookmarked, with a printer-friendly version and a handy 16-page pdf that collates bookmarks and maps, the latter in full-color glory as well, of course – and rendered player-friendly. Two thumbs up!

Reading this book has been an excellent reminder why I love Gary MCBride’s writing – this campaign is a stroke of genius, beautiful and is aptly enriched in every form by this pdf. Gaps are closed, fun is added and overall, this can be considered what one needs to get the Director’s Cut of the AP -as such, I consider it non-optional, should you choose to run WotW.

At the same time, however, this supplement is not truly required. What do I mean by this? The new art and Minionquest-modules are fun, yes, but they in no way are required for the AP and the reward-ratio for the Minionquest-interludes is rather conservative. While they do have benefits that are tangible, in the end, they do not really reflect the challenge they pose. This may be intentional, yes, but it may result in a bit of disappointment by the players. Conversely, the Minionquest modules aren’t conventional modules – they very much could be considered more akin to old Sierra adventures or the Quest for Glory-series in that they are exceedingly lethal and at times, by design, unfair even. For some groups, this may be a welcome change of pace; for others, it will annoy them like crazy. While *personally*, I love this type of challenge, one of my players was exceedingly annoyed by this type of design. What also remains is the simple fact that this very much is the director’s cut of WotW – not everyone will enjoy the fact that the crisp story has been embellished; much like the Lord of the Rings director’s cuts are not everyone’s cup of tea. On the one hand, this brings more detail, options etc. – on the other hand, it does add in quite a bunch of material that is not crucial by any means, which may result in impatient players.

That being said, at the same time, this pdf is probably not enough to warrant running the AP again, should you have already finished it. Still, we have a stellar expansion to the AP IF you like the notion of the uncommon adventure design. If you do, this is well worth of a final verdict of 5 stars. If not, you may wish to detract a star. My final verdict, hence, will clock in at 4.5 stars, rounded up to 5.

You can get this supplemental book for WotW here on OBS!