Trail of the Apprentice I: The Bandit’s Cave

Trail of the Apprentice I: The Bandit’s Cave 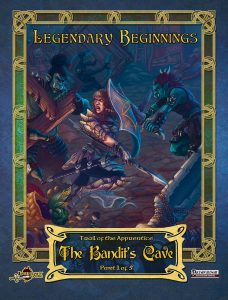 The first installment of the Trail of the Apprentice adventure arc (I refuse to use the term “AP” for anything that does not cover at least 12 levels) clocks in at 50 pages, 1 page front cover, 1 page inside of front cover, 1 page editorial, 1 page SRD, 1 page ToC, 2 pages of introduction, 3 pages of advertisement, 1 page inside of back cover, 1 page back cover, leaving us with 38 pages of content. It should be noted that the pdf comes with a massive 20-page art- and map-folio that contains not only nice sample artworks to use as handouts (and the handout), but also player-friendly iterations of the maps featured herein, complete with grid etc.

So, this is the first of the series that uses Beginner’s Box rules to (hopefully)bring ample of new blood into the hobby we all know and love. The first thing you should know, then, is that the series takes place on the world of Terrallien. This world is a relatively normal fantasy world, though gunpowder is known – other than that, the flavor is relatively vanilla and allows for easy integration into most campaign settings. The game begins in the idyllic village of Corbin, which also constitutes the first of two appendices; the second provides the two statblocks herein that are slightly more complex in the regular PFRPG-rules-version, since all other stats use the simplified beginner’s box statblock notation. Nice to see this extra support, particularly considering that plenty of kiddie-groups use full-blown rules. All right, that would be my cue: The Trail of the Apprentice is a relatively kid-friendly AP, which means that kids ages 8+ should not encounter issues; heck, there are some 6 year-olds that wouldn’t have issues with this. That being said, parents with particularly sensitive kids should definitely read this before playing.

The pdf also features the moon goddess Losinia in a complete write-up. Depending on domain chosen, one of 5 domain abilities is present, though e.g. calming touch’s text continuously refers to binding ties in a glitch that should have been caught. The handout, if you’ve forgotten to print the maps from the associated file, is also reproduced herein, though it’ll only come into play at the very end of the module.

Now before I go into the plot of the module, it should be noted that this is perhaps the most novice-GM-friendly module I have encountered for PFRPG – encouragement is given in the copious sidebars, from tactics to notes on how to run traps and detecting secret stuff to advice on scaling encounters, overland movement and similar tricks – for us veterans, that’s all easy-peasy, sure – but it’s nice to see a module set out this deliberately to make running it easy for a GM with literally 0 or next to 0 experience. That being said, as always, a GM obviously needs to know the rules – the advice pertains the practice of GMing.

All right, and this is as far as I can go without SPOILERS. Potential players should jump to the conclusion.

All right, still around? Only GMs here? All right, so the plot is pretty simple: Lay down the map of the village, establish Corbin…and at dusk, the orcs attack. The PCs are interrupted from their nice stay at the tavern and the GM receives a lot of advice on playing orcs – and the first combat is on, as the PCs get a chance to defend the weapon shop. In the aftermath of the attack, the PCs are contacted by Sherif McBride to track down the orcs -for they have stolen a valuable artifact, a green serpent statue, from the local scholar This would be, btw., as good a place as any to note that the pdf does sport a ton of read-aloud text, making that aspect of “helping new GMs” work neatly as well.

Tracking the bandits overland, the PCs will soon enter Tiller’s Marsh, and on the road, they will have a chance to deal with the classic of floral predators – a young assassin vine. The map provided for the encounter is btw. nice – as a whole, each combat-relevant place does get its map, which once again emphasizes the “easy for novices”-aspect of the series. The added tactics similarly help. In the gorgeously-mapped swamp, the PCs will have to deal with a lizardfolk attack and encounter their first hazard with swamp gas, which once again, is depicted in a manner that is easy to run -and yes, there is a player-friendly version that does not note the place the swamp-gas bubble bursts. The illustration of the lizardfolk makes for a great handout and depicts them as relatively nonthreatening – no one should get nightmares from these.

On their way, the next encounter represents an introduction to problem-solving, as the PCs can drag a local hunter from quicksand, with several possible means of achieving the goal being spelled out for the GM. In order to get to the bandit’s cave, the PCs will also have to brave a giant grass spider’s territory in what perhaps could be considered to be the most creepy of encounters herein, though smart PCs can simply provide food for the spider and bypass it completely. The eponymous bandit’s cave, then, would be basically a simple 8-region cave – the progression is absolutely and deliberately linear to keep the group focused on progression – and as far as I’m concerned, it works that way. PCs who retreat and play it safe sans taking care may see that the bandits at least have some rudimentary tactics, though it should be noted that, including the boss Goroc and his wolf (lavishly-rendered), the challenge posed here is more than fair.

While a minor trap (introducing traps as a mechanic with ample GM-help) can pose a bit of a challenge, all but novices should cleave through these obstacles like a warm knife through butter – if e.g. kids already have some experience, you may need to beef that up a bit. (And if you have smart kids, using the regular rules, who known how to make effective builds, this becomes a slaughter…but then again, this is pretty much intentional.) The module ends, when the PCs find (surprise!) a letter of a mysterious “B” that tasked Goroc to steal the serpent – and no trace of it, which means the PCs are on their track to module #2 – the sage Ithamar tells them that the twin of teh statue, the white serpent, current in the care of Lord Samuel Wolfe, may well be in danger of theft as well – and sure enough, the PCs will head to the lord’s private museum in Port Fairglade…in part #2.

Editing and formatting are very good, with the glitch, in the rules-section of the new deity of all things, constituting the most major blunder herein. Layout adheres to a nice, easy-to-read two-column full-color standard and the pdf comes fully bookmarked for your convenience. The full-color artworks provided are nice indeed and the plentiful full-color cartography is similarly great – for some groups, these may even represent the major draw here.

Paris Crenshaw’s “Bandit’s Cave” absolutely achieves its intended goal – if you’d rate a module in difficulty on a scale of 1 – 10 for both players and GMs, then this would be a 1 on both scales – this is a very easy introductory module that should not generate any frustration unless the dice REALLY hate the players…and that’s part of the game as well, right? Anyways, this poses an interesting conundrum for me as a reviewer. You see, when you ask most folks of their very first RPG-experience, you probably won’t hear about that AP with its elaborate plot, that highly complex investigation or that bone-chilling horror scenario that killed off all but one player.

What you’ll hear, at least in my experience, is a variation of this simple, basic plot: Bandits and/or orcs/goblins/insert low-level humanoids attack; PCs track them to hideout and defeat them. Sometimes sans the tracking, beginning directly with the complex. The boss, usually, is a bandit with wolf, a shadow, a giant spider or an ogre. In the aftermath, the PCs find a very obvious hint that sends them on their quest. I have seen this set-up so many times in various configurations, I have, as a person, come to loathe it. Perhaps it’s my personality structure and the fact that I lack a penchant for nostalgia, but as a person, I can’t stand this set-up anymore. I wished I had AP-quality plots and complex modules back in the day.

That out of the way, I am not going to penalize this book for delivering what I’d call the “atomic roleplaying experience”, the easiest introductory denominator, if you will, for that’s exactly what the module is intended to do. The target demographic here is not a cheapshot of nostalgia cloaking a lack of imagination. Instead, every single aspect of the module is thoroughly designed to be easy on the players AND GM. GMs are so often forgotten, and while the learning curve of most GMs is pretty rapid and steep, a good GM can make or break not only a module, but how players perceive the hobby as a whole, particularly when they’re new to it. It is here that the module sets itself apart from aforementioned adventures that employ the same atomic experience – it sets itself up, as deliberately as possible, to provide an enjoyable experience for everyone involved and achieves its goal very well, with each encounter and scene introducing one aspect of the game and how to handle it. That deserves applause.

Now there is one thing I considered to be somewhat surprising – you see, considering the focus of the module towards family gaming, towards new players and kids in particular, I was somewhat surprised to note that “good” behavior isn’t really rewarded herein. Dealing with adversaries in a nonlethal fashion, an easy way of fine-tuning a moral compass in the making, and rewarding the players for being good guys, is not something the module does and constitutes the one aspect herein where I believe the module falls short of its mission-statement. How to rate this, then? Well, here things become difficult once again – jaded guys like yours truly won’t get that much out of this module…but frankly, we’re not the target demographic and later installments of the series do a better job there. But yeah, unless your nostalgically-inclined, experienced players and GMs probably won’t be too blown away here. However, rating the pdf for such a demographic wouldn’t be fair – instead, I will look at this under the premise of what kind of job it does as far as the “very first module”-aspect is concerned…and here, my own experience and cynicism aside, it excels.

Unless you’re overly ambitious and want to jump in at the deep end, this represents the most gradual and easy way of “learning the tools of the trade” I have seen for current systems with the morals/nonlethal gripe being the one big flaw I can deduce. Hence, my final verdict for this module will clock in at 4 stars – GMs to be, those of you who never GMed before – this is your ticket towards realms unknown. It’s not an epic saga of its own, but it is a fun time for all novices involved.

You can get the 5e-version here on OBS! (Note that my review’s based on the PFRPG-version, though!)

You can get the whole campaign here for PFRPG!

You can get the whole campaign here for 5e!