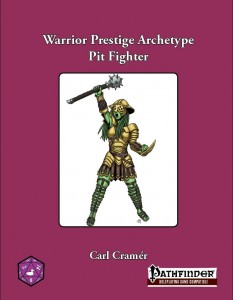 This pdf of the Warrior Prestige Archetype-series clocks in at 8 pages, 1 page front cover, 1 page editorial/introduction (explaining the base concept of the series), 1/2 a page SRD, leaving us with a 5.5 pages of content, so let’s take a look!

The pit fighter as depicted herein is a full BAB-class with a good fort-save, d12, 4+Int skills per level – notice something? Yup, this one is based on the barbarian, whose rage (and upgrades) are solidly distributed throughout the class levels along the base lines of the barbarian. Fast movement is also maintained at first level and trap sense, DR…that type of thing’s still here.

Where things become unique is with second level – here, the poor equipment ability enters the fray – the pit fighter may ignore the broken condition for one piece of armor or a single weapon for one combat. 4th level sees a bonus of +1 to damage and atk when wielding performance weapons, which scales up by +1 at 10th and 16th level. Performance weapons? Yup, for this class heavily uses the pretty cool performance combat rules from Ultimate Combat – hence also the importance of the 2nd level ability showmanship, which allows the pit fighter to treat any combat as a performance combat 1/day, +1/day for every 6 levels thereafter, with the DC being governed by the CR of the opponent. A handy table lists the DCs by current crowd attitude (yes, your phantom crowd can boo you…)

5th level nets a weapon trick – this translated to Improved Dirty Trick and the option to use performance weapons to perform these. Additionally, 1/round, the pit fighter can combine this effect with damage as though subjected to a regular attack, a theme further expanded at 12th and 18th level. 6th level provides synergy between rage and the roar of the crowd, with 14th level further enhancing this synergy.

The pdf comes with pretty creative FCOs for the core races and a sample half-medusa build for levels 1, 5, 10 and 15. Finally, the pdf does offer a brief non-performance combat-option…but quite frankly, why bother when that’s pretty much the heart of the class? Especially since the variant non-performance showmanship can be cheesed to deliver infinite rage by having a crowd of followers gawk at the pit fighter’s combat?

Carl Cramér’s Pit Fighter is one of the most interesting Prestige Archetypes in my book – the dispersal of abilities and their synergy make the class feel well-rounded; from the get-go, we get rage, but the lack of rage powers means that the class remains distinct from the barbarian, n spite of the less intriguing first level. The lack of dip-exploits and cool synergy with performance combat makes this generally a neat option. I just wished showmanship had a slightly less conservative limit and that the variant rules couldn’t be cheesed this easily. With these two being my only, minor complaints, this installment of the series scores a final verdict of 4.5 stars, rounded down to 4 for the purpose of this platform.