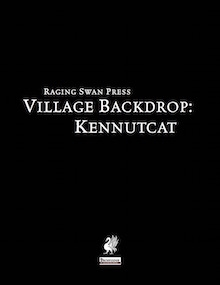 In this installment of the Village Backdrop-series, we venture forth to a place that has a history steeped in colonialism – the native Kittiwaki have all but been exterminated and now the settlement prospers – a visitor coming to town indeed sees a calm, idyllic town – by day. At night, though, the fog rolls in. And in the best of Ravenloft-traditions, voices of the lost, footsteps echoing in the fog, make travel unsafe. The town is cursed, the mists seek to claim it -and on the porches, called widow walks, those left behind look outwards to the sea, straining their eyes against the glare of the sun and the shroud of the mist alike to catch a glimpse of one of the innumerous lost on the waves – for legend has it that a titanic beast lurks beneath the waves and those that seek to slay it never return.

Obviously, this settlement sports the usual level of detail for the series – with nomenclature and clothes both being featured among the wonderful pieces of local color. A marketplace section is provided alongside lore to unearth, whispers to overhear, and events to witness.

Kennutcat is a haunted place – and while many of the haunts herein are harmless (even coming with a small table), several of the unquiet dead’s echoes in the streets are anything but that: A total of 6 such glorious haunts are presented – and exorcising them is anything but easy, with the inscrutable nature spirit representing perhaps the most powerful of them all. And if this review sounds a bit praise-laden…then, well – there’s a reason for that.

Editing and formatting are top-notch, I didn’t notice any glitches apart from a missing + in the settlement’s statblock. Layout adheres to RSP’s smooth, printer-friendly two-column standard and the pdf comes with full bookmarks as well as a gorgeous map, of which you can, as always, download high-res jpegs if you join RSP’s patreon. The pdf comes in two versions, with one being optimized for screen-use and one to be printed out.

John Bennett is one of the few authors who *really* get what the peculiar brand of gothic fantasy is all about – his superb “Against the Cult of the Bat God” and his work as a line-developer for Fat Goblin Games Vathak can be considered irrefutable proof of this. Indeed, he has salvaged a setting of disparate ideas and streamlined it into something awesome – and I’m saying that as someone who absolutely did NOT like the setting’s first iteration. Now, it should be no surprise that his evocation of a small, haunted colonial town pulls ALL of my heart’s strings. The town presented in these scant few pages represents a superb realization of the tropes I adore, with local color spiced in to render this a nigh perfect realization of what Ravenloft, in its best moments, used to represent.

Oh, who am I kidding? I’m awaiting John’s offerings with quite frankly baited breath and this is no different – indeed, its concise presentation and flair render this essentially a sandbox module that tells you to just fill in the blanks – its potential is that pronounced, this can be run as a more than inspired backdrop. More seamlessly than in most pdfs in an already glorious line, this one can be used for a pretty neat experiment in GMing I like to engage in time and time again:

Take this village. Throw your PCs in. Watch.

If your group is in any way like mine, the players will start speculating in the face of the eerie atmosphere evoked and you’ll be able to pick the best of their ideas and combine them – now mind you, this can be done with many supplements. Few support it to this extent, have this many pieces of local color that may or may not provide the “truth” you decide upon, the horror beneath the everyday life. I love this settlement. As a reviewer, it represents to me yet another excellent installment in a series that almost never gives me any reason for true complaint. It also makes for a perfect insert into a horror or dark fantasy campaign, for a neat location in a Freeport or Razor Coast-saga…

As a person, though, it makes me crave more from John Bennett’s pen, it makes me long for a setting, gazetteers, villages and adventures – it makes me wish that Raging Swan Press had the license for Ravenloft, with John at the helm. Ah, one may dream. Unsurprisingly, this receives 5 stars + my seal of approval…well…and I’m a Ravenloft-fanboy and a sucker for well-presented, eerie horror of the subtle variant. Plus, it’s my personal list. I nominate this as a candidate for my Top Ten of 2015. (On a tangent – this pdf represents the Village Backdrops-series holding the record for the longest string of uninterrupted 5 star + seal-ratings any series has. I’ve been trying really hard to nitpick this one apart -the above is the result…so yeah…congrats!)

You can get this awesome village backdrop here on OBS and here on d20pfsrd.com’s shop!