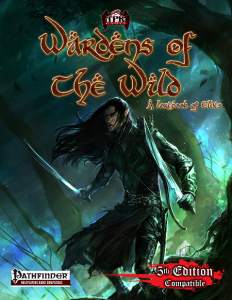 This massive sourcebook clocks in at 217 pages, 1 page front cover, 1 page editorial, 2 pages of KS-thanks, 2 pages of ToC, 1 page of SRD, leaving us with 210 pages of content, so let’s take a look.

But before we do: I was a stretchgoal for this book and thus, this will be more of a general overview and the following will not consider a rating -you won’t find me picking apart content or the like in the following text, as I instead try to provide a general idea of what you can find in this book.

Got that? Great! We begin this massive book with an introduction and a short fiction, where the calculating, deliberate and, one might say, somewhat alien perspective of the elves is elaborated. But beyond the tropes of LOTR evoked in the intro, this book has a more distinct heritage that you should be aware of. Back in the day, when I began playing roleplaying games as a wide-eyed youth, the books were different to what we have know. In a racial book, for example, you had next to no crunch – instead, you’d get a LOT of cultural information. On the psychology of the races, their culture, their mindset. While I am a huge fan of d20-based games, I will never forget holding my first 3.0-races book in my hands…and being utterly shocked at how reductive the information was. I grew up learning about grey elves and the crucial differences between the wood and wild elves…and suddenly, all of that was boiled down to different stats. I *liked* the different stats, mind you – but oh boy, was I dissatisfied at the same time.

Flash forward. Pathfinder’s Golarion has provided a unique angle for the elven people, with their new iteration as quasi-aliens blending well with the more weird fantasy-esque tropes of Golarion. At the same time, I do think that the elven people could use more details regarding their mindset and culture. This book, then, would be book that instead points towards the traditions of elven people as established in the historic context within the game systems we all know and love, though with the traditional TPK Games-style tint of dark fantasy. From the Daoine Crann’Moradh, the forest elves to the Aern Rugadh (high elves) to the Laith Seachran (grey elves) and Daoine Scath (umbral elves), the respective elven races presented in the book come with full details – from age, height and weight tables to nomenclature and interaction with other races, the respective sub-species of elves do feature a lot of details, which, obviously, include racial stats.

The racial stats, generally, can be considered to be pretty solid, though they do increase the power of eleves in contrast to the respective base renditions championed in the respective core books of the systems in question. In PFRPG, ~15 RP per the (imho unreliable) race-builder mechanics are the target line, while in 5e, the respective races do not build upon the subrace system employed in the PHB, instead opting for a treatment as new races. The different authors involved in the creation of this book do show, as e.g. some sections use attribute shorthands like “Dex” while others employ the proper, full name for them. If you are peculiar about things like that, this may somewhat annoy you. That being said, with some hiccups here and there, the general racial write-ups can be considered to be well-crafted pertaining the functionality of the rules-language. Power-level wise, the elven races herein are approximately on par/slightly above the aasimar and tiefling in PFRPG, while the 5e-versions clock in at a strength-level beyond the core races. As a plus-side for 5e-players looking for flexibility, alternate racial traits do come with 5e-versions, which allows players more customization options than usual for the respective race chosen. Pathfinder fans can btw. take a look at a long list of favored class options, including classes from the ACG and Occult Adventures. Pathfinder players can also find 3-level racial paragon classes for the respective races in this book.

Beyond that, each of the races sports one racial archetype, which is also translated into a 5e ability suite: The brawler stone crow, for example, is translated into a monk archetype. The book also features a sample PFRPG-character and settlement statblock for the respective races.

Beyond the elven races already mentioned, the small and somewhat more fey-like elflings and half-elves based on the new elven races can be found herein as well. The book also features a metric ton of new feats, for both 5e and PFRPG – though, obviously, the PFRPG-feats are more numerous herein. Beyond a LOT of these feats, the book does feature a couple of special categories, my favorite being the one called Reverie feats, which represents feats that tie into the connection of elves with the realm of dreams, poaching the Autohypnosis skill from Ultimate Psionics and utilizing it for a non-psionic context. Beyond that, these reverie feats help making elves different – though e.g. gate/teleport as soon as 8th level in 5e is imho much too soon. The dance of swords feats also represent an iconic and evocative concept associated with the elves.

The book also contains a lot of elven traits for PFRPG as well as a bunch of archetypes that generally are aligned with elves in concepts; 5e players can elect to play evil, spider-queen serving paladins, for example. The PFRPG-material ranges from highly complex archetypes to smaller archetypes. Aspecial mention deserves Jason Linker’s rampart-class – basically an alternate magus focused on defense and soft terrain control, which also sports multiple archetypes to further customize it. I similarly consider the thorn warden class, a specialist in using spectral vines, that is somewhere between druid and assassin in its ability dispersal, interesting. Unfortunately for 5e-fans, these two classes do not gain a 5e-iteration.

Both systems also receive an assortment of different spells and magic items, the latter of which encompass magical board games, leystones or the like. One of my favorite chapters in the book would be the final one, which depicts elven flora and fauna, with Cruathau, Cu Sidhe and Great Stags making fro interesting critters, though these only get stats for PFRPG.

Editing and formatting are generally solid on a formal level, though some development/unification of the rules-language would have been beneficent for the book. Layout adheres to a beautiful 2-column full-color standard with quite a lot of text per page and a blending of new and old artworks in both full-color and b/w. The pdf comes with bookmarks for the chapter-headers, but not for the individual pieces of crunch.

This book’s goal was to make elves more “elf-y” and in this goal, it succeeded; the master-race-like tropes we know from Tolkien-esque fiction certainly can be embodied better with the contents of this book. Whether the book is for you, ultimately depends on whether you always felt that elves need an upgrade in the respective systems covered or not and on your personal priority of what you expect from a roleplaying game supplement. If unified presentation, rock solid crunch, perfect balance with core and the like are particularly important to you, you’ll enjoy this less than if you’re into this book for the cultural tidbits, reverie-expansion and the desire to see rules represent the somewhat unearthly elves we know from fiction. It should also be noted that Pathfinder is definitely the main system here; not all components have been translated to 5e, though most of the crunch has.

In the end, wardens of the wild is a nice book for people who always felt that elves ought to be more like the beings we know from fiction and those that want a take on the races that feels significantly less like long-lived humans with pointy ears.

As always, thanks for reading this!