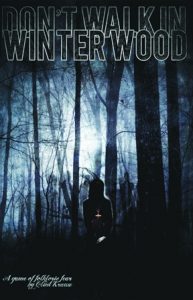 This game clocks in at 46 pages, 1 page front cover, 1 page editorial, 3 pages of credits/thanks/reference, 1 page back cover, leaving us with 40 pages of content, so let’s take a look!

So, what is this? The simple answer would be that this is a cooperative, narrative, rules-light HORROR game set in a vaguely colonial setting in the United States. Society is one of rough and closely-knit, often isolated communities. Superstitions run wild and even well-meant belief may seem barbarous to us. Transportation is still mainly defined by equestrian means and print books are rare and expensive. AT night, it is still candles that are used to pierce the dark. Against said backdrop of, quite literally, dark times, there is the village. On its east side, there is the Winter Wood…and pretty much everyone agrees that its strange, unseasonal cold is not natural. The perpetual fog, its nature as unexplored and the people going missing – all of these mean that it is a place usually not visited.

Children grow up with folklore pertaining said dread wood – the first would be supplemented by Indian legends, underlined by e.g. The Algonquin Legends of New England, and war chiefs may still haunt this place. Similarly, the cowardice of erstwhile settlers may have brought the ire of a woman scorned, deprived of her husband upon the place – strange, legless apparitions and vanished women do not bode well…

The sad tale of Nelly Anderson supposedly has her taken by a strange crone of clouds and changing eye-colors; the purported Roe Witches, caught, according to statements, in some pagan rites and thus executed, replaced with effigies…deer with wolf-like, sharp teeth…and then there would be the soothsayer Caleb, who averted calamity from the village, only to give his life…consorting with a strange trophy…

Within the forest, there is a hole, which may lead to hell…and there was a strange tendency and occurrence of a grave robber paying dearly for his crime. A strange, horribly mutilated, perhaps undead bear, Scarfang…and, of course, wars and skirmishes among the colonial powers have also cast a dark shadow on this land. The chittering tress and a tale of cannibalism and, purportedly, eternal youth…and Mr. Buglesuede…the grey wolves and the dread meadow in the midst of the foreboding woods…oh, and those ghosts on the Indian hill… it is not wise to thread where so much darkness gathered…

The village does have a series of entries pertaining folk wisdom: Red thread around the throat of women does supposedly cloak them from evil. White grass supposedly kills you, inciting horrible hunger; doors are warded with iron nails or crucifixes and there is a secret sign to ward versus evil…of pagan origin, some belief. Similarly, the burial customs sport silver coins under the tongue and separate paths are taken home after burials. Of course, children’s games are about dares here…but is it smart to recite the rhyme about the women of Roe?

So this would be the basic set-up – complex, evocative and suitable dark. How do you play it: Well, you have two types of players: The Walkers, each of which controls a single character. The second type would be the Watcher, who is basically the GM of the group. You need one six-sided die per player and some sort of object you can use as tokens. That’s it. Regarding atmosphere, a dark place, slightly cold, is obviously ideal.

Character creation is dead simple: Make up a name, concept, motive – there you go. As a default, actions are described in the past tense and 3rd person, thus making it akin to the cooperative telling of a story. Whenever a character comes across something frightening or harmful, he hands the walker a cold token. Entering the wood nets you cold token #1. To determine whether you encounter something and for conflict resolution, the basic system is easy: You roll the d6 and compare it to the cold tokens you have: If you roll more than the cold tokens held, your result may become less pleasant – in short, this does mean that things escalate further, increasing the pace in the latter stages of a game. Upon gaining 6 or more cold tokens, you are taken out. And that’s it. As simple as can be, right? Yep, but also deceptively efficient.

The game continues to provide a section on building proper scenarios for the game – these steps are simple and contain the notion to build a premise, then the woods, mood and climax of resolution. Sound advice regarding the generation of folkloric fear (subtlety is king, my friends, and so is the rule of omission) bespeaks an obvious knowledge regarding how to run evocative horror. (Fyi: A solid b/w-conceptual map of the area’s provided.)

The pdf also features ready-to-play scenarios, which focus on saving a girl from a witch’s curse, strange lights in the woods (love that one’s antagonist(s), but won’t spoil it here; there’s also a gory take on a classic creature’s haunting from American mythology; there are foolish kids, seeking to steal totems..The sample scenarios with their details mean that, basically, you can just take this pdf and play sans any preparation.

Editing and formatting are top-notch, I noticed no significant glitches. Layout adheres to a 1-column standard in b/w and the book is intended for A5 (9” by 6”) in size, so you’ll rather have a booklet-style offering. The pdf’s artwork is thematically-fitting photo-montage-ish artwork I enjoyed. The pdf has 3 rudimentary bookmarks, but I’d strongly suggest printing this out – navigating this in its electronic iteration can be distracting and none too comfortable.

Clint Krause, with additional material by Daniel Bayn, Jason L Blair, Rafael Chandler, Jeremy Keller, Daniel Moler and Jason Morningstar, has created a ridiculously simple, amazing little game that shows that horror needs no vast rules. This game is simple, works amazing as a means to show non-roleplayers how amazing RPGs can be, understands its genre and generates a truly evocative, disturbing atmosphere. The fact that you can play it literally with one die, if you want to, makes it a perfect companion for urban exploration or trips in the wilderness…or spontaneous games on days like Halloween, amidst the darkness… You can explain the rules in less than a minute and a watcher who has read this book (and has a good memory) can literally run the game without a book! Handing off, deliberately, slowly, a cold token can be nerve-wracking and the various ideas presented should carry a ton of games.

This is as simple as it gets and as efficient as it gets. This understands proper horror. An awesome, inexpensive little game – 5 stars + seal of approval. Get this!

You can get this amazing, flavorful and thematically concise rules-light horror game here on OBS!