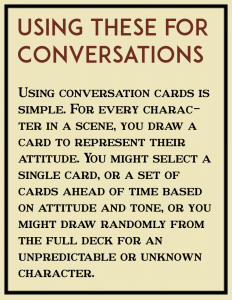 This is something different, a system neutral game aid of sorts. The pdf either comes as an 8-page pdf, with half the pages depicting the back cover of the cards noted; the other half the respective cards.

This is, in short, a helpful guideline to determine somewhat more complex and varied starting attitudes for characters – and they also help as roleplaying aids of sorts for PCs and GMs in particular

The first pages are used to explain the mechanics of these, and each page contains 9 cards. There are three sets of cards: Passive cards, submissive cards and aggressive cards. These sport a speech-bubble that is color-coded, allowing you to immediately discern the type of card featured.

Now, each of the cards provides also a glyph inside the speech bubble. These glyphs allow for differentiation between subtle, casual and overt emphasis. 3 cards per emphasis are provided, with one page devoted to each card type.

The helpful thing for GMs and players less comfortable with roleplaying (or, for example, social nuances due to one reason or another), is that each card sports suggested conversation verbs, as well as actions to suggest roleplaying gestures at the table.

In short, this is made as a decision-quickener, as a catalyst that should be helpful for particularly newer players or groups, or individual GMs that are uncomfortable deciding the emotional state of copious NPCs. The product comes with a full array of .PNGs in an archive, which makes printing/only-use easy.

Michael McCarthy’s conversation cards are an unpretentious GM-aid. Veteran groups probably won’t need these cards, and they are not something that will blow you away, but for the right people, they can be a godsend, a neat aid, a fun potential randomizer. The cards, priced at just $0.99, are fairly priced for what they provide, and as such, my final verdict will clock in at 3.5 stars, rounded up for the purpose of this platform.

You can get these cards here on OBS!