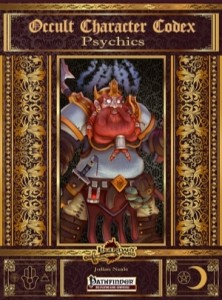 This installment of the Occult Character Codex-series clocks in at 30 pages, 1 page front cover, 1 page editorial, 1 page ToC, 1 page how-to-use, 1 page SRD, 2 pages of advertisement, 1 page back cover, leaving us with 22 pages of content, so let’s take a look!

I like Occult Adventures – a lot. It’s one of my favorite Paizo-books out there and the classes rekindled my faith in Paizo’s class design, even though e.g. the kineticist’s presentation in needlessly obtuse in comparison to the playtest…but that’s just me being a nitpicking bastard, I guess. Suffice to say, the rather complex classes are cool – but making characters with them takes obviously a bit longer than for less involved classes…something that, as a GM, may prove problematic. This is where this series comes in – basically, we have a collection of characters herein, spanning the CRs from 1 – 20, all ready and set for your perusal.

So how were they made? Well, for one, the builds use Pathfinder Unchained’s automatic bonus progression, which means that the characters have a better chance to stand against the PCs sans flooding the campaign with magic items – a decision I very much welcome. The builds are not made to be sheer exercises in powergaming superiority that exist in a vacuum, instead championing the approach of making viable characters, complete with a brief personality sketch, though that component is less pronounced than in Purple Duck Games’ codices. Options and buffs are included in the statblocks, though handy pre-buff sections provide the information sans them, should your PCs be able to catch the character unaware.

Beyond that, advice on using the characters in combat and class-specific peculiarities are covered as well – and yes, bonus discipline spells are denoted separately, while psychics with the abomination discipline have dark half’s rather complex ramifications included in the statblock for your convenience. Mimic metamagic, where present, does not sport a preselected metamagic feat to account for the individual campaign.

All right, so that would be the basics – how do the respective characters fare? Well, for one, the first thing you’ll note is that the races run a gamut from the common core to the more exotic – sylphs, wayang, samsaran – there are some “oddball” races here among the builds, though not as much as in Purple Duck Games’ comparable codices. Archetype-wise, we cover mutation mind and psychic duelist – so no formless adepts and amnesiacs herein. On the plus-side, the psychics do offer variety regarding age category and two of them sport 1 ranger level multiclassed in, though both of these take different approaches here.

For the psychic, spell and feat-selection as well as discipline-choice and phrenic amplifications constitute major decisions that provide diversity and indeed, the pdf does a GREAT job here. Granted, there are some cases of straight-progressions to be found, you’ll still find a rather nice diversity of foci regarding the respective characters. While the flavor-text is pretty minimalistic, the tactics-section for the characters is rather extensive, which makes using them on the fly rather simple.

Editing and formatting are top-notch, I noticed no glitches. Layout adheres to a beautiful, two-column full-color standard and the pdf sports several beautiful pieces of full-color artwork, some old, some new. The pdf comes fully bookmarked for your convenience.

Okay. I know some of you skip past that first section of my conclusion, where I talk about formal criteria. I’d like to draw your emphasis to the “top-notch” and the “no glitches.” As you know, I tend to not pick apart every creature statblock, but I do pick apart a couple of them in a given file – and more often than not, I notice a small hiccup here and there…sometimes a big one. I care primarily about whether a statblock can be used by the GM sans violating x tenets or botching some crucial things. When I started picking apart these…I found nothing. No glitch. I picked apart the next one…same game. This may sound like it’s an easy thing…it’s not.

Julian Neale’s psychics herein may be on the short side regarding their fluff when compared to Purple Duck Games’ more evocative codices, but the wildly diverse builds herein are exceedingly refined and polished – and for that I really enjoyed this pdf. While I wished it had covered the missing two archetypes as well, this is at best a minor hiccup considering the diversity otherwise exhibited. My final verdict will hence clock in at 5 stars.

You can get this neat collection of psychic-stats here on OBS and here on d20pfsrd.com’s shop!