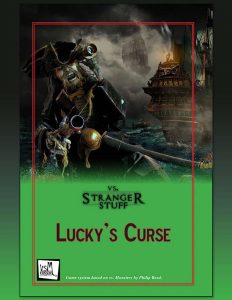 This short module for the vs. Stranger Stuff-game clocks in at 10 pages, 1 page front cover, 1 page editorial, 1 page character sheets, 1 page SRD, leaving us with 6 pages of content. The pages are laid out in digest style (6’’ by 9’’/A5), allowing you to theoretically print up to 4 pages on a sheet of paper, if you’re conscious about your use of paper/ink/toner.

Now, this review is focused on taking a look at how well this module works within the context of season 2 of the vs. Stranger Stuff-game. The adventure has originally been released for the first season of the RPG, and as such should be retroactively be declared “easy mode.”

Anyway, what may not be immediately apparent for you would be that this is basically a holiday module of sorts – this is a module centered around St. Patrick’s Day, and as such, players that show up in all green get either Good Stuff Lucky or an extra use of the ability. Once per encounter, this lets you redraw cards. Okay, and here we have an excellent illustration of how the game matured; I don’t have the original first season of the game, but one glance of the rules for the Good Stuff should make progress evident: The rules-text in the adventure is a bit confusing – per encounter/per session are two very different things and it is not clear how the extra use interacts here. The ability also does not state how many cards may be redrawn.

Contrast this to vs. Stranger Stuff’s Season 2 rule-book, and we get a precise and concise definition of this ability. The difference is significant.

What I’m trying to say is this: If in doubt, use the rules from the second season.

All right, only GMs around? Great! We join the PCs as they are in Lucky’s, a family-friendly restaurant with a small pub attached to it, owned by Brian MacNally. As the PCs are waiting to get seated, a small man dressed in green runs into the place, to the shout of “Leprechaun!”, which should get their attention. Anyways, the fellow proceeds to serve food and beverages and is, indeed, just a short man. The usual available pub games are represented as Muscles or Brain challenges, with the highest draw winning the round – a solid, if minimalist representation within the confines of the system.

As the PCs are enjoying themselves, they will notice the strangers – dressed in long, ragged coats down to their knees, with fur draped around their shoulders and leather boots. These guys may well start shouting and there is a chance for a minor altercation here. This is also a good place to (re-)introduce characters from other adventures; as a stand-alone, making one of the kid’s parents stand in for Brian may be another tweak to get the PCs involved.

If they’re smart, they’ll notice that the strangers are looking for something. Of course, things escalate, and the strangers drop their guise, as mist flows around them, eyes glow and Brian gets knocked out – the strangers are actually ghost pirates, looking for Brian’s heirloom, one of the coins of St. Patrick, which is responsible for the MacNally family’s good luck…but also what these fellows want. Their telekinesis is pretty potent and we get alternate stats for vs. Ghosts – in that system, they are division III, just so you know. Minor complaint: There’s an aesthetic formatting hiccup in the stats here.

…and that’s about it. The adventure does mention potential consequences for the strangers absconding with the coin or for the PCs defeating them…but ultimately, this is a WEIRD one. The module basically acts as a creature feature; there is no investigation going on and weirdness happens in plain sight of everyone, which may not gel well with all games. If you hearken closer to Stranger Things’ aesthetics, this may well be a bit overkill regarding exposure. The combat in a jam-packed tavern also is…abstract. Why don’t the NPCs help? How does this play out? Panic? The adventure does not manage to convey even the slightest bit of the chaos of a tavern brawl, let alone a supernatural brawl. The lack of a map for Lucky’s also makes the proceedings somewhat abstract, and not in a good way.

Editing and formatting are okay; while I did not note truly serious issues, I did notice a few aesthetic issues. Layout adheres to a nice 1-column full-color standard. The full-color artwork is okay. The pdf does not sport any bookmarks, but doesn’t necessarily need them at this length.

Ben Dowell’s “Lucky’s Curse” is intended as a brief adventure for a rules-lite game, but even within this paradigm, it feels oddly minimalist, and not in a good way; the pdf can potentially provide full-blown exposure of the supernatural for a game, which is not what everyone will want to go for. It also is less of a module and more of an initial encounter: Basically, this module’s entirety is spent on what would be the first encounter in most modules. Instead, the first encounter is the last and ultimately, there’s nothing relevant going apart from that. Brevity is no excuse here either, as the author has shown in his other works that he is perfectly capable of telling a rewarding, short story in less words. This is not horrendous, mind you, but it fell seriously short of what I hoped to see within these pages, both on a narrative and structural level. My final verdict will clock in at 2 stars due to the fair price point.

This really impressive second season of Vs. Stranger Stuff can be found here on OBS!

Interested in Vs. Ghosts? That one can be found here!